Unfortunately for the developers of upcoming retro FPS Ion Maiden, trademark law can be tough. After facing a lawsuit from legendary band Iron Maiden for violating their trademark,  3D Realms has relented and renamed its game. Ion Maiden will now be called Ion Fury, and has received a new trailer showing off the new branding.

Ion Fury follows the adventures of Shelley “Bombshell”  Harrison, who fights sinister cybernetic cultists on the streets of Neo DC. Made with the Build Engine, the same game engine used for classic 90s first person shooters like Duke Nukem 3D and Shadow Warrior, it maintains mechanics like a large arsenal of weapons and no regenerating health. Ion Fury is a sequel to Bombshell, a top-down  shooter that introduced Ion Fury’s protagonist.

3D Realms CEO Mike Nielson has released a statement on the game’s title change. “After careful consideration, we’ve decided to rename our first-person-shooter “Ion Maiden” to “Ion Fury.” A lot of thought went into this, but most importantly it would be a disservice to our loyal fanbase and the fantastic developers, to drag out a long lawsuit.”

Nielsen seems optimistic about the game despite its legal challenges. “The amazing gameplay, interactivity and pure fun, is what makes Ion Fury a great game. Not the title.”  Fortunately, the name change does not seem to have delayed or significantly impacted the game’s development. The band Iron Maiden has not released a statement regarding the lawsuit.

3D Realms have been quick about rebranding the game, and already have a special physical edition available for pre-order with the new title. People who buy the Big Box Edition of the game will receive a custom USB drive with the game installed, a copy of the digital soundtrack and an A3 poster,  among other cool bonuses. 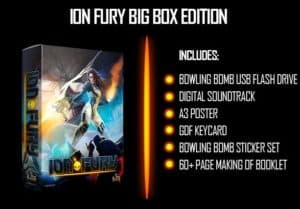 It is kind of a pity that the developer’s intentions have been thwarted by a lawsuit. Although the band Iron Maiden has the right to protect their trademark, it was a fun parody title. However, a game is more than its title, and Ion Fury still looks really fun, regardless of what it’s called.

Ion Fury is set to release first on PC on August 15. Ports for the Nintendo Switch, PlayStation 4 and Xbox One are planned for later.