The Turok franchise is finally making a comeback, in a rather unexpected way.  The Turok games were a series of first-person shooters about a time-travelling Native American who fights dinosaurs, based loosely on Acclaim Comics’ series of comic books of the same name.

This new game, called Turok: Escape from Lost Valley and developed by  Pillow Pig Studios, is a big, adorable departure from its predecessors in both tone and gameplay. Not that that’s a bad thing, by any stretch.

Instead of the realistic and gritty first person shooters of the past, this new entry is populated by adorable chibi people.  Even the animal and dinosaur adversaries look impossibly cute and cuddly. Combat is still certainly present here though, despite the change in art style. The time-travelling warrior Turok still wields his trusty bow and hunting knife, and must protect himself and his brother against both human and animal enemies. Together, the brothers must survive and escape this mysterious valley of prehistoric peril.

According to the game’s Steam store page, “In Turok: Escape from Lost Valley, you wake from a long sleep as Turok and adventure alongside Andar through the dangerous world of the Lost Valley as you seek to find a path home. Encounter iconic creatures from the Turok comic series with a cute but dangerous twist. Master the art of the knife and the bow as you encounter adorable but deadly enemies, discover a path through unique environments, and choose the best weapon for the enemy in front of you.” 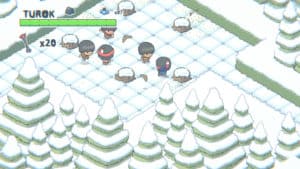 Although the inhabitants of Turok’s world are now adorable, the core experience and concept of the franchise is intact.The series began on the Nintendo 64 with Turok: Dinosaur Hunter, in 1997 which has been ported to the Switch and other platforms.  It was followed by a series of sequels over the next few years for the N64, and other consoles. The video game series has been largely dormant since Propaganda Games’ attempted reboot of the franchise in 2008.  Escape from Lost Valley will be the first entry in the game franchise to not be a first-person shooter.

Turok: Escape from Lost Valley will release on Steam July 25.  If this chibi-style reboot of the series takes off, maybe the franchise can finally come back from extinction.