Fortnite, one of the most popular games in the world, has been making some controversial moves lately. The game has introduced new mech suits, which many players are decrying as overpowered. In addition, a new dog cosmetic has been added, which people have noticed is oddly similar to a previously released cosmetic reward.

To begin with, Epic introduced pilotable mechs into Fortnite at the start of the current season. This new addition was controversial from the start,  with many players considering them unbalanced. A campaign was started on Twitter to #removethemech. Although Epic has responded by lowering the mech spawn rates, the studio has resisted removing them entirely.

In response, Epic wrote a blog post on the B.R.U.T.E mechs, and why they were introduced. According to Epic, the mechs are there to give everyone “a shot at that first elimination or Victory Royale moment and the satisfying feeling that comes with it.” They were designed to give players of lower skill levels more chances to succeed. They admit that the mechs “should feel like a unique engagement and not be the dominant experience during a game”, which is why the spawn rates were reduced. However,  at least for this season, the mechs are here to stay.

In other Fortnite news, a pet dog cosmetic was introduced, and subsequently pulled from distribution. The dog was called Gunner, who could be purchased for 1000 V-bucks and be carried around on players’ backs. Now, Gunner is gone, due to him appearing to be way too similar to Bonesy, the backpack dog from a previous Battle Pass. 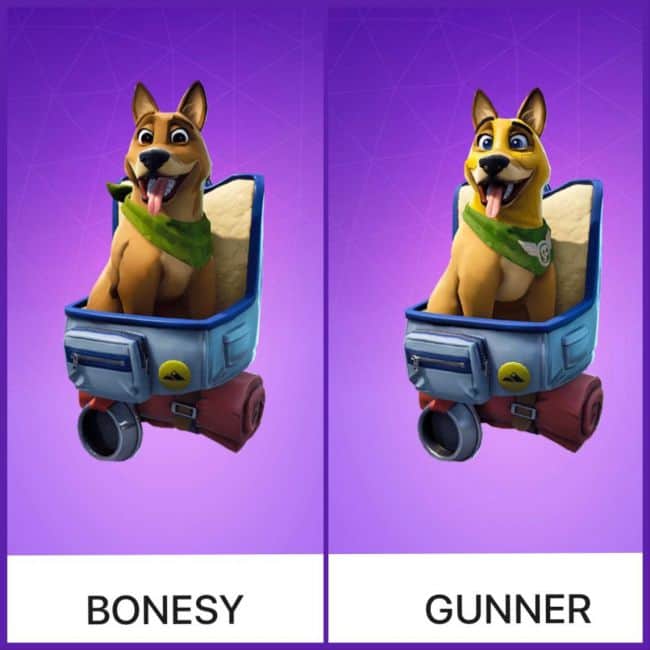 Players were angry at Gunner’s existence, as cosmetics are supposed to be Battle Pass-exclusive, and not available elsewhere. Gunner and Bonesy aren’t completely identical, but it would be difficult to tell them apart without looking at them side-by-side. Gunner’s price was also an issue; 1000 V-bucks is more than it costs to buy a Battle Pass on its own at 950 V-bucks.

We should not have released the Gunner Pet and apologize for doing so. Within the next couple of days, all purchases of Gunner will be refunded for the full amount of 1000 V-bucks as well as an additional 200 V-bucks and the Pet will be removed from the Locker.

Epic apologised for adding Gunner, and offered refunds to anyone who bought him, as well as 200 bonus V-bucks. Players that refund Gunner in the next couple of days will receive a replacement Refund Token “that can be put towards any eligible items that were purchased within the past 30 days.” Gunner will subsequently be removed from the store and players’ lockers.

So unfortunately for dog lovers, owners of Gunner can’t keep him around. Hopefully, Epic will release a new, more distinct doggo at some point that everyone can enjoy.