How DLC makes Moonlighter even better

It’s odd I suppose, revisiting an “old” game that you’ve reviewed. Such is the case with Moonlighter. I truly loved the game. But with the benefit of more time to pore over the base game and, as the title says, its newest DLC. It’s time to have another look at a game called “truly staggering and comes with a big recommendation from yours truly”.

In truth, I have a lot of love for this game. The graphics and the audio are to die for. But as is often the case, returning to an old game highlights the minor flaws one looks over. In the intervening year has brought with it new content. Content that not only helps bolster the experience of the original but helps correct issues with it as well.

The first expansion dropped in February. Entitled “Friends and Foes”, the main changes brought in familiars to assist in battle, and new mini-bosses to all the dungeons. Gotta say, these mini-bosses are quite the challenge. They really do add another layer of peril to the adventure. I’m a little on the fence about it. The problem is that the punishing stuff is much more present with mini-bosses. It’s offset a bit by the games dungeon design giving you some warning when these fights are around the corner. You can plan around this encounter.

More fun though is the familiars. Each familiar has specific ways of assisting. My favourite? Well a little obvious but the Bard Puppet. Why? It heals. It does really add a bit of flavour to the game, and of course, the familiars in and of themselves serve as carrots to keep you whaling on the grunt enemies to grind yourself some battle buddies. A great little addition. 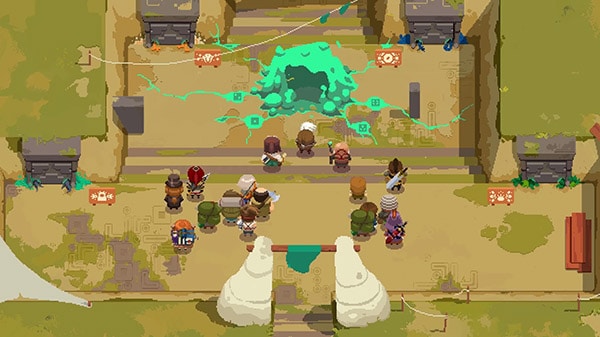 The more recent and more relevant entry is the paid DLC expansion: Beyond Dimensions. Rest assured, for those that who don’t want to buy in for more Moonlighter, there is a bunch of free stuff with the update. There’s a little more in the world, new thieves, new clients and a brand new baby slime family. 11 Bit studios are really just doing some great updates to this game, keeping everything fresh.

But of course, with the paid DLC you’re getting a bunch of new rad stuff. A brand new dungeon host to many new enemies, and a few familiars too. A brand new set of weapon upgrades are on the cards and even a brand new class of weapon. “Trick Weapons” can be found in the dungeon with a variety of powerful effects. Beware, these effects powerful as they are will deplete your health, giving players some real risk-reward snap decisions.

It’s fair to say that I have good reasons that I haven’t played Moonlighter for some time. But it’s safe to say that 11bit is putting their all into improving and expanding on this game. They’ve got their hooks in me, and I hope unlike last time, I’ll be sticking around to the end.