As a 90’s child, it’s still strange for me to see Mario and Sonic in the same game. I had a Wii, but like everybody else I bought the console but not that many games. As much as I adore Sonic, I wasn’t interested in the Mario and Sonic mashups. I can imagine Sega lending out Sonic to Nintendo, but I couldn’t imagine Nintendo letting Sega play with Mario. Yet here we are again.

Despite not being interested in the previous Olympics mashups, I must admit this game has me intrigued. Not only do they have arcade style mini-games featuring both the Sonic and Mario teams, but the game also features a story mode where Bowser teams up with Dr. Robotnik! The game also mashes up some modern graphics with some retro visuals.

We know all of this thanks to some extended looks at the game seen at the recent Tokyo Game Show where Mario & Sonic got extensive live-streams throughout the event.  The live-stream was in Japanese, of course, but here is a snippet uploaded by YouTuber Fran Riquelme featuring live gameplay from the Sega stage.

I for one am looking forward to Sonic taking a Red Shell to Mario. The other levels played on the day included karate and squash. There was a trailer summarising the different sports available including surfing, skateboarding, adventure climbing, diving, and also showing off the story mode. I must say it’s looking like a decent party game and thinking back to the console wars in the 90’s, I’m sure gamers will be picking a side.

I don’t know how Mario ever intends to beat Sonic in the 100 metre sprints, but I guess compromises have to be made when you are using two of the biggest icons in video games. 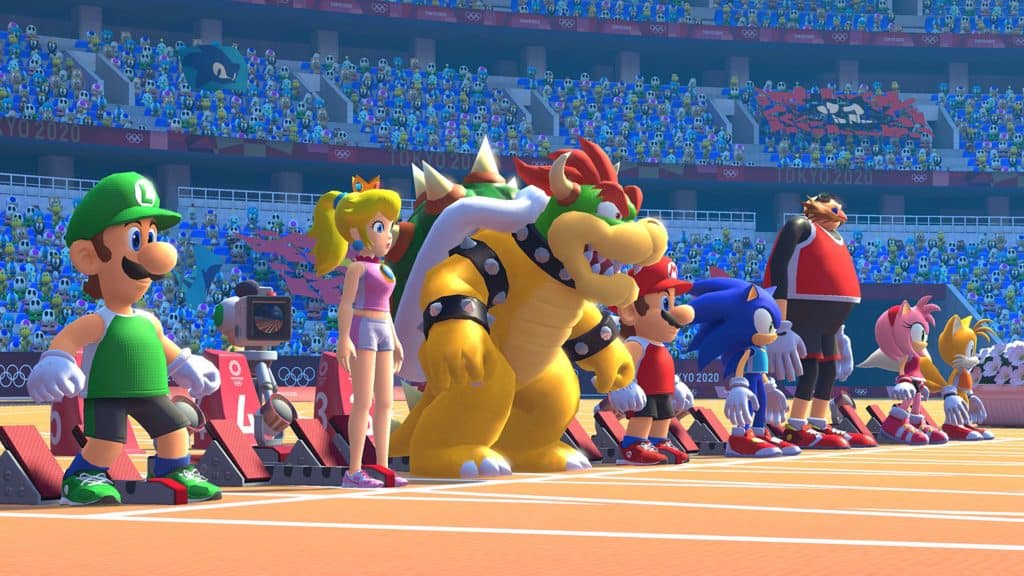 It goes without saying Mario & Sonic at the Olympic Games Tokyo 2020 is a Switch exclusive. Now could you only image if these games begun incorporating loved mascots from other franchises and appeared on multiple platforms? A man can dream…

Mario & Sonic at the Olympic Games Tokyo 2020 is due for release November 9 for Switch. Are you ready to race?