This morning’s Nintendo Direct finally scratched the Animal Crossing itch plenty of people have had since the last announcement. The trailer shows off a bunch of the new stuff that you’ll be able to do in Animal Crossing: New Horizons including crafting, building and inviting up to eight of your friends to come and visit your island.

Good old Tom Nook is back, expanding his list of careers with the new addition of Resident Services Manager. Running a little operation where villagers can buy tool and furniture. Nook has also taken up lawn care, offering to buy any weeds you pick out of the ground for bells. Though it seems you can also use the weeds to craft items, the trailer showing off a very sweet leaf shaped umbrella the weeds were used for.

He’s also offering other ways to earn cash, though this time in the form of Nook Miles, that can be earned by completing tasks around the island, like talking to other villagers or catching fish. This is done through the Nook Mileage Program, run by the raccoon himself. He and his nephews, Timmy and Tommy also provide the player with a Nookphone, which can be used to contact other villagers and complete tasks for the Mileage Program. 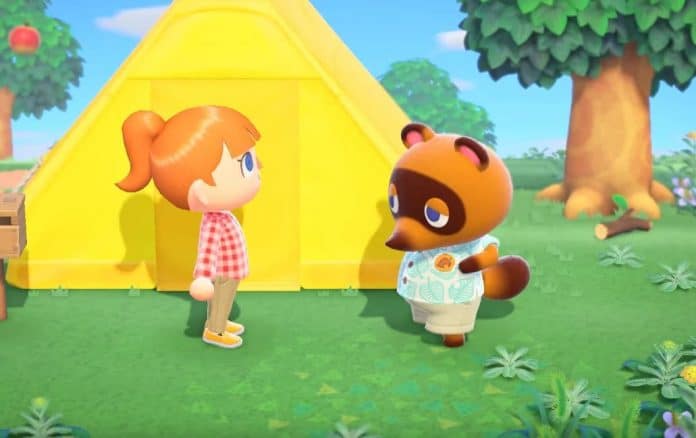 Despite all the new additions. The trailer shows that all the Animal Crossing staples we know and love will be returning. You can fish, catch bugs and shake trees to your hearts content. Plus the possibility of inviting eight players is so exciting; visiting friends’ villages has always been an important part of the series. Now with the building functions, inviting your pals over to help you start getting your island together is going to be wonderful.