Creature in the Well: Hack, slash…pinball?

Perhaps you’ve played pinball recently, maybe it’s been a little while. Although there is one thing everyone can agree upon. The first time you played pinball it seemed like a simple idea, hit ball and get the points. But then you got kicked to the curb, we all had that moment. Pinball, while a simple concept, requires some very precise skill to master. Smacking away at the pinball will be futile, you need timing and a keen eye. Those same rules come in to play with Creature in the Well which combines pinball with a hack and slash dungeon crawler to bring a fresh idea.

You play as BOT-C, a defunct robot from a forgotten time. You awaken in a desert beset by a harsh sand storm and make your way to the mountains in the distance. You know there is something you can do to free this world from the never ending storm in the depths of the giant machine found built in to the mountain, but, there is something else in there, that doesn’t want you to succeed.

After meeting the eponymous creature lurking in the shadows, you feel a certain sense of dread. It doesn’t attack you at first but it certainly lets you know that it won’t let you fix this world. So you get to work, delving deeper and deeper into the mountain. But where plenty of other games would present a simple hack and slash working through waves of monsters, Creature in the Well instead presents itself as a puzzle to be solved with the power of pinball. 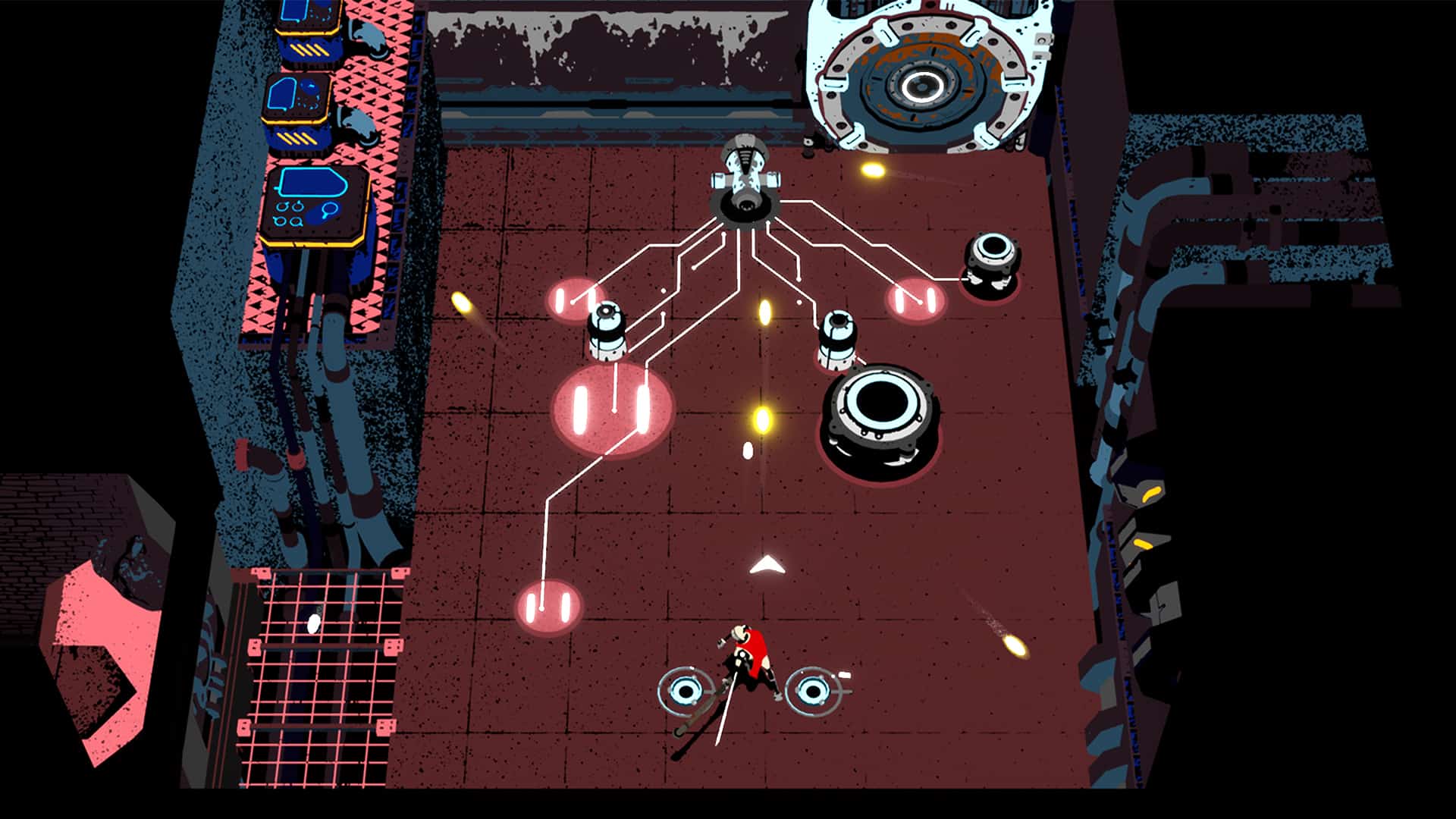 The basics are easy, you will enter a room and find a white glowing orb. Taking your swinging arm and a stick, you’ll send the orb ricocheting off the walls with the aim to make collision with plates placed around the room. As you clear rooms you’ll unlock energy to spend on opening other parts of the base and eventually turning on important sections of the weather machine that will save the planet.

As you go you’ll unlock new weapons that behave differently with the energy. Occasionally you’ll face hazardous obstacles and at least once a sector you’ll face an obstacle presented by the Creature itself. You’ll need to work on timing strikes with two selected weapons along with navigating the space with dashes to avoid obstacles leading to a cacophony on screen and an array of spinning plates you’ll need to keep your eye on. If you go in just swinging your arm around with no extra thought, you won’t get anywhere. 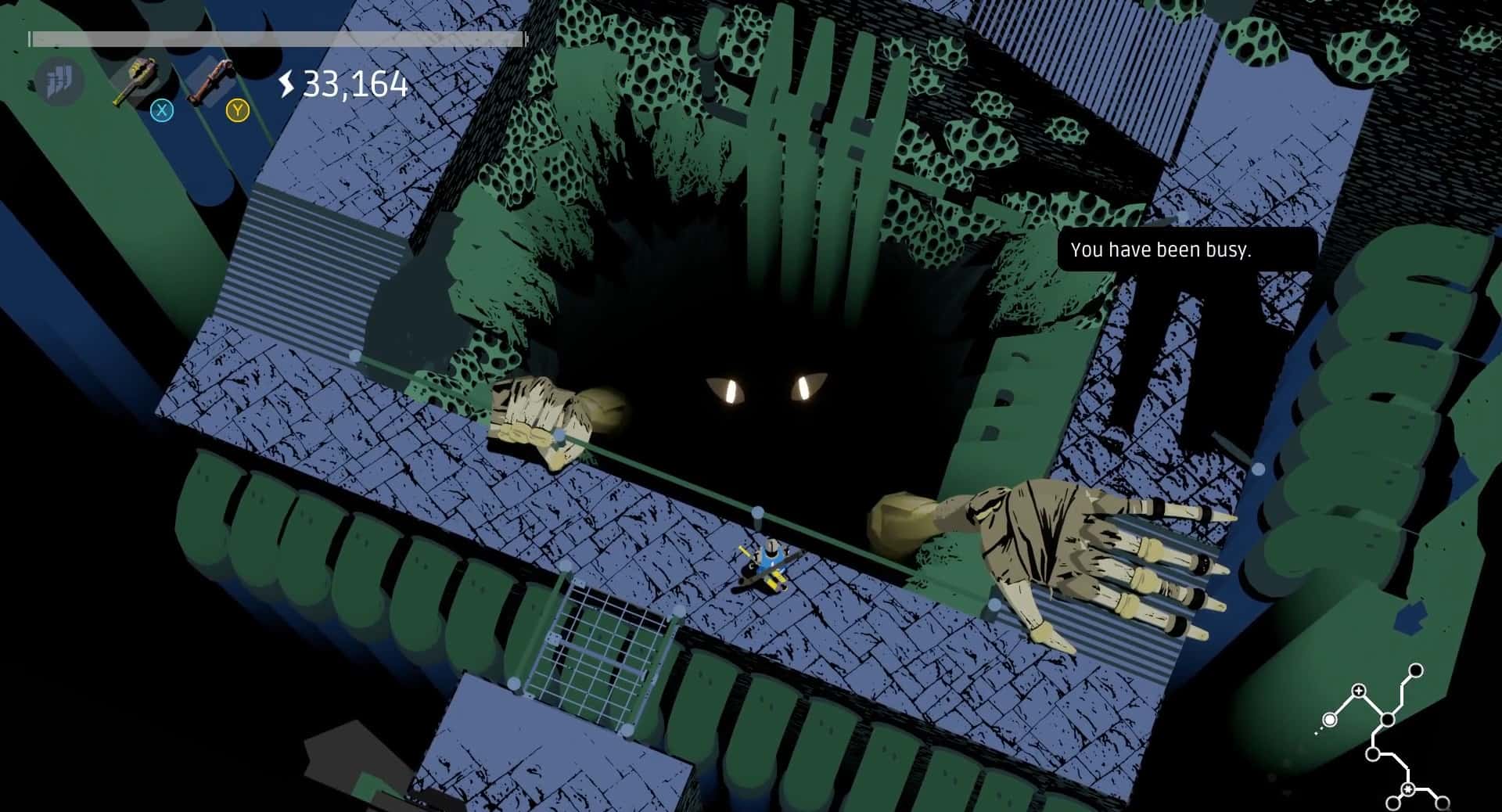 Death will come for you and the creature will lift up one hand to take your body and dispose of you on the outskirts of the settlement just outside the well. The penalty isn’t really anything more than a roadblock until you can find a way through. You can resolve this by heading to another area to find weapons a bit better suited for the problem, find upgrades or just give you a break to come back to it later.

The art style of Creature in the Well is amazing. Everything is colourful and vibrant, however with a more toned down pallet that makes the whole thing look like it’s covered in the dust of eons past. Each area is colour coded so you can always tell where you are at and zones tend to follow a puzzle theme so it helps put you in the right mindset. The townsfolk you meet in the settlement also bring a really interesting flair with alien but familiar designs based around the animal kingdom. The whole world is just so intriguing and I hope it isn’t the last we see of it. 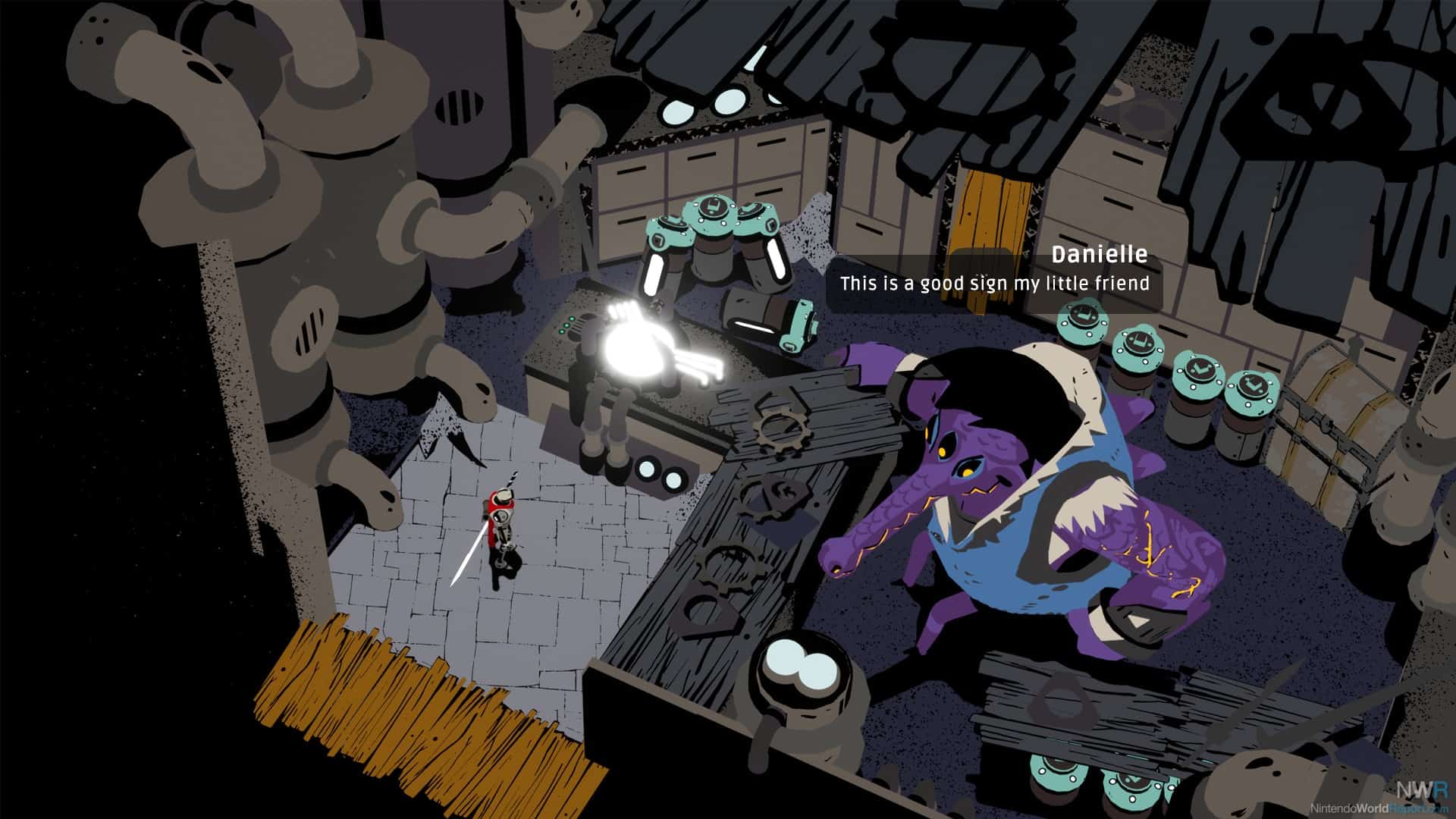 Creature in the Well isn’t going to be for everyone. However an intriguing idea takes what many would have turned into a standard dungeon crawler and elevates it to something that will challenge you further. The fact that each weapon plays differently also means that there is plenty to customise to your play style, which you’ll need to invest time into perfecting.

I played on PC but with a controller which I would recommend as keyboard and mouse was not a fun time. The game lives and dies on dual stick controls so it is the perfect title for the Nintendo Switch because of the bite sized nature of the levels.

Creature in the Well is available now on PC, Xbox One and Nintendo Switch and If you’re looking for something to really test your skills, I can’t recommend it enough.