Sacre Bleu had an impressive demo at PAX. It’s a side-scrolling platformer, in which I played a tiny mustachioed musketeer armed with a rapier and a gun. The first level involved some jumping puzzles, slashing some enemies, and shooting some doors down. I was enjoying it, but it was pretty standard stuff.

That all changed when I received the steam blaster. It had infinite ammo, but had to reload after a few shots. The game slowed down to let me precisely aim where I was pointing it. It blows back anything in front of it, and simultaneously blows the musketeer in the opposite direction. It’s the core mechanic of the game, and one of many elements that sets Sacre Bleu apart from other indie platformers.

I used the steam blaster to knock a few enemies back to give me room to throw a grenade. In addition, it gave me extra jumps to get through a tricky spike-filled corridor. I even used it during a boss battle, which functioned like a very tense puzzle sequence. The versatility of the blaster opens up many possibilities for how it can be used. From my brief time with Sacre Bleu, it looks like developer Hildring Studio have even more ideas on how it can be used.

I had a chance to speak to Stein Loetveit, the director of Sacre Bleu. He was a friendly guy: after introducing myself, he pointed out that both our first names are derived from the German and Spanish words for “stone”. He was refreshingly candid about his experience making the game. 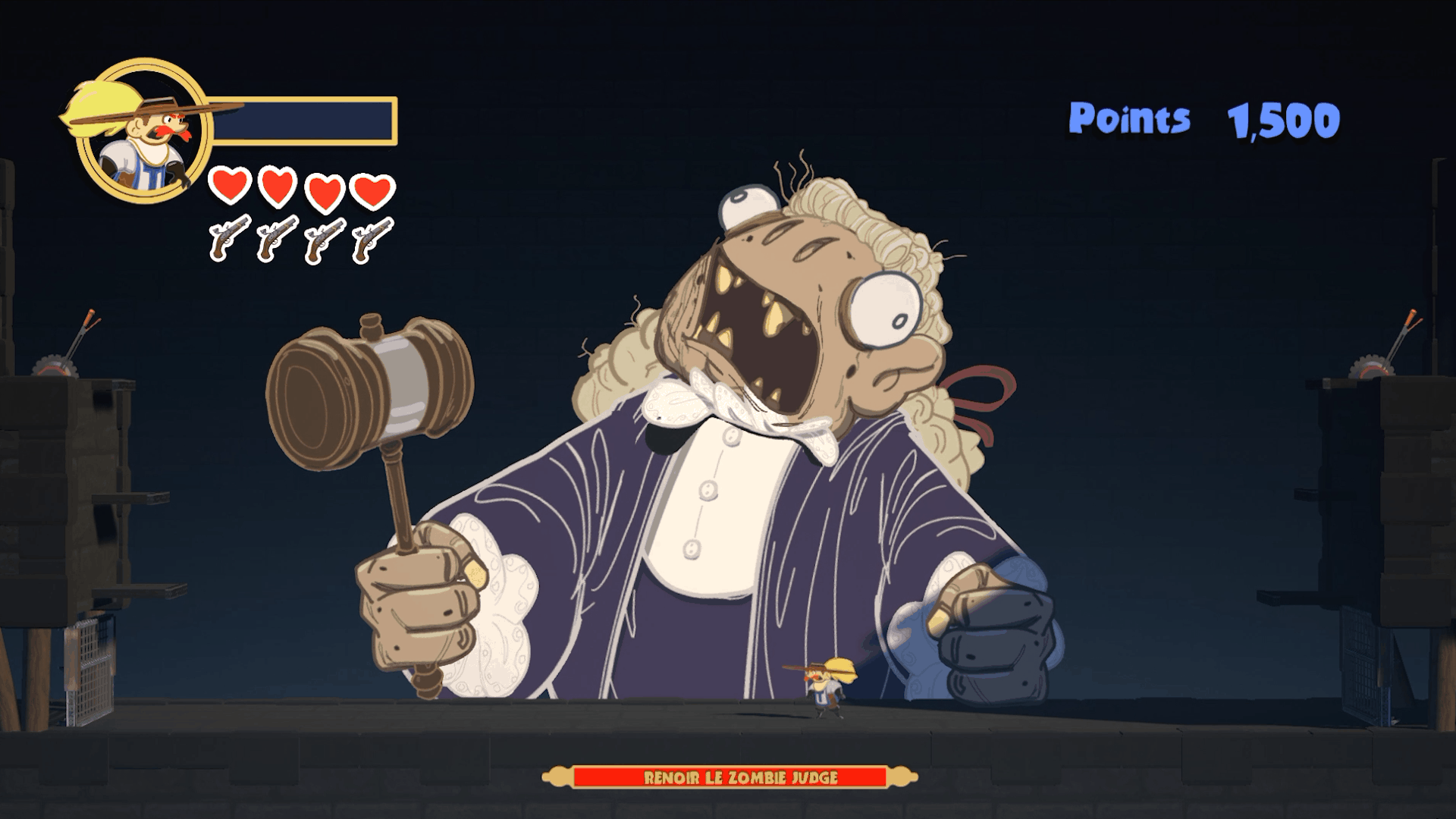 “You can call me game director, but I also do the programming, the art, the social media – I do a lot of stuff.” he said. “I hired freelancers for sound and switchboarding, and I hired producers and software engineers as well.”

I asked Stein why he wanted to make Sacre Bleu. He said “It’s very complex,” and then chuckled. “No, it just happened. I was drawing a musketeer one day and thought ‘I could try [making] a game.’ Of course, I regret it now.”

Stein told me the game has been a long time coming. “I’m doing this part-time. That’s the preface.” he began. “Part-time, it’s been four years in development. It’s my first game, so obviously, I had to learn everything and go slow. But I’m having fun. I think.”

By day, Stein is animator with an impressive CV. The Lego Movie and Spider-Man: Into the Spider-Verse are some of the films he has worked on. You wouldn’t be able to tell from looking at Sacre Bleu that it’s his first game. The art style is superb, which is evident when playing, but also resulted in Sacre Bleu’s gorgeous PAX booth. 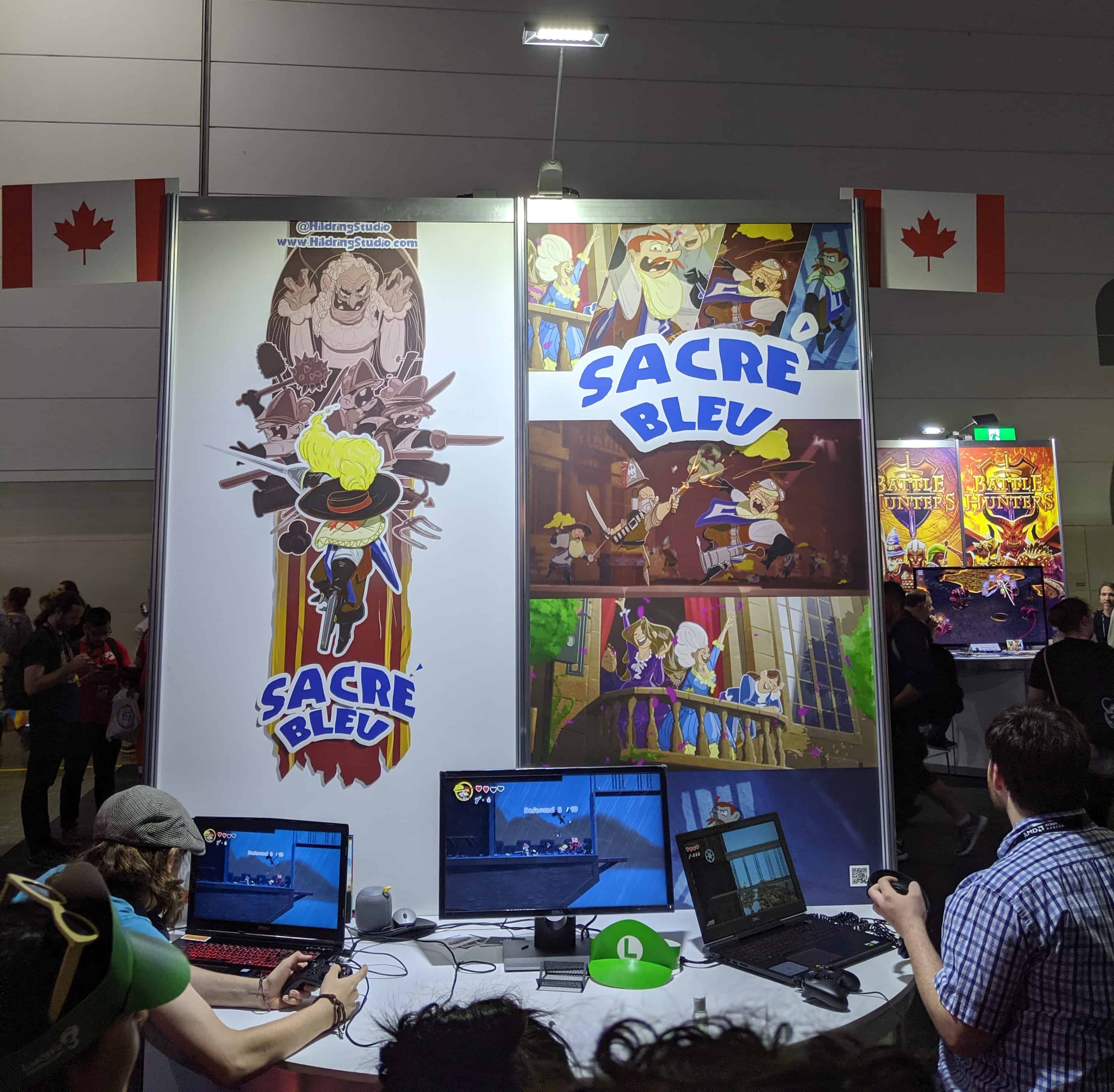 I asked Stein if there was a projected release date for Sacre Bleu. “No.” he said, bluntly. “I would love for it to be done late next year, but if I said it’s gonna happen, I would be lying.”

I tried to speak again, but he interjected with “We are aiming for Switch and PC, and whatever else we can get our dirty hands on.”

“That was going to be my next question!” I said.