It is hard to believe that through the haze of Australia’s bush fire tragedy, we are still seeing more and more people from all over the world join the cause to help Australians. Even those from the games industry have been stepping in, pulling up their selves, and doing what they can to help and show support. Another game has now joined the efforts to support those affected by the fires, in the form of Kao the Kangaroo: Round 2.

You may already be familiar with the first game from the 2000’s, a classic 3D platformer adventure with the cutest and bravest protagonist; Kao the Kangaroo. Due to the games popularity, we now have the second installation of the game available on Steam, with overwhelmingly positive reviews.

Tate Multimedia, the development team behind the Kao the Kangaroo series, has felt obliged to help bring relief to their beloved Kao’s motherland in it’s time of need. They have announced that from the 9th to the 19th of January 2020, 100% of all profits made from the sales of Kao the Kangaroo: Round 2 on Steam will be donated to WIRES (NSW Wildlife Information Rescue and Education Service) emergency bushfire funds to aid injured wildlife.

The price bracket for this game is quite small for such a large amount of entertainment in return. All receipts, sales reports and wire transfer confirmation of donations will be openly available to the public after it’s been sent through. so that everyone can see that their donations have made it through safety to the right people. 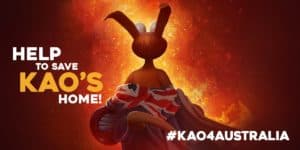 Currently an estimated 1 Billion animals have lost their lives to the fires that have ravaged through 10 Million hectares of Australian bushland, with 24 human lives lost. It is hard to stay positive in such dire times, but the kindness of people all over the world showering their love and help upon us is truly inspiring. Thank you to all those out their chipping in what they can to help in this crisis. From the bottoms of our hearts here at Checkpoint, we are so grateful to you.