Ever wondered what would happen if food gained sentience and decided it was sick of being eaten? Worry no longer! Nom Nom Apocalypse, a top-down shooter developed by Deadleaf Games is here to let you know exactly what would happen, and it isn’t pretty.

Set in a post-apocalyptic city taken over by angry food monstrosities, the duty of saving the world falls on the shoulders of chefs. Players take control of one of these many trigger-happy chefs, using their individual powers to put an end to the tasty menace.

The chefs are equipped with over 30 culinary weapons for dealing with the foodpocalypse. Ketchup Squirters, Mustard Blasters. Everything you could need to have a stellar BBQ, or to run-and-gun your way through procedural generated levels filled with delicious monsters. Players will navigate greasy oil slicks, sticky candy puddles and other hazards while mixing and matching 45 game-changing perks including kill streaks, dodgerolls and bubblegum shields.

All of which are going to be essential in the fight against these mouth-watering monsters. Don’t worry though! Because you don’t have to go at it alone. The game supports both couch co-op and online play, so grab a sous-chef and go absolutely ham (get it?). Just remember: the longer chefs survive, the more frantic the feast becomes. 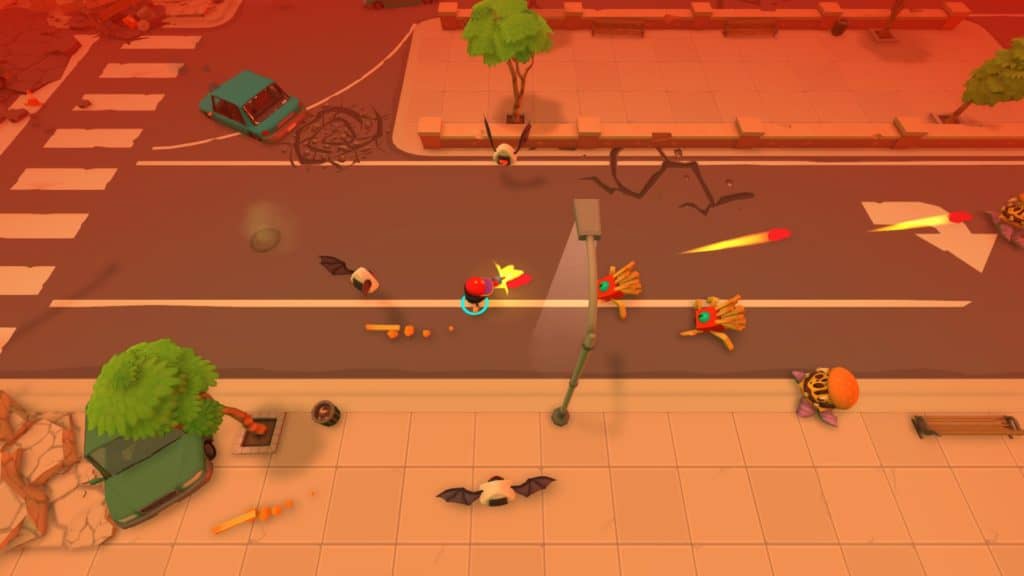 Nom Nom Apocalypse is an homage to classic monster movies with mini-bosses and fast-moving enemy hordes. Josh Sacco the man behind Deadleaf games says, “There’s an earnest creativity behind classic monster movies I find truly inspiring” he also states that while the game is filled to the brim with creepy-cute enemies and a bubbly art style, it’s still, “a tough-as-nails arcade shooter demanding focus, precision, and perseverance.”

Nom Nom Apocalypse launches worldwide on Steam for PC on Feb. 13, 2020, with Xbox One and Nintendo Switch releases planned for 2020. If you want to learn more about the game, be sure to check out the website here. Get cooking!