The last few Januaries have been quite the gift. While a lot of Q1 can be a bit deserted when it comes to game releases, often a game emerges atop the pile. A game that, if not the best of the year, sets a high standard. On my list at least, Lightmatter is currently setting the pace.

Let’s be honest about why this game got my attention in the first place. Three words: One hour demo. The games industry is constantly trying to justify more and more monetisation. Against this backdrop, Lightmatter saunters in, filthy with bravado. This game is bloody great, and the people behind it know it. Releasing a game demo is a solid gamble. It also speaks to the real strength of this title, a strength that only a demo can communicate.

The gameplay on display is, to my taste, fantastic. The rules are rather simple: The floor is lava, but only when in shadow. A basic twist on the original, but it’s such a smart one. It opens the game up, it adds a natural dynamism. A door closing is all the more dramatic when the shadow cast confers death. Admittedly, the “floor is lava” may feel somewhat deceptive, as platforming is very much a backseat passenger. Lamps and reflectors are your tools to direct and redirect light to grant you safe passage through the underground laboratories. Add big red buttons, moving platforms and the like, and you have all the ingredients for a game focused on first-person puzzling.

It has been quite some time since I have played a puzzle game that has felt so well balanced. Easy enough to be accessible and encouraging, but challenging enough to really feel a sense of accomplishment upon completing a level. The mechanics are simple enough that you know exactly what to do, but there is a journey to finding out how. You often are confronted with the ramifications of the premise of each level, and forced to challenge and systematically disassemble your assumptions of a level to reach its solution. There is such a powerful “A-ha” moment in every level. 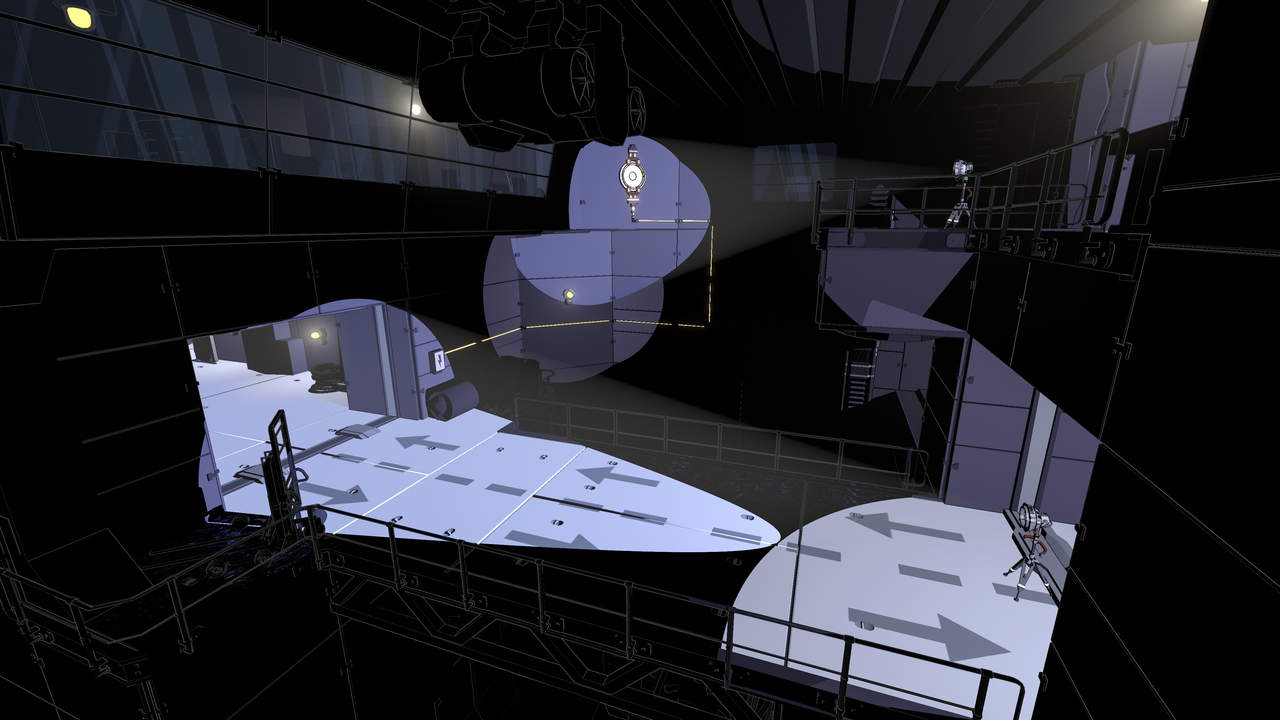 This is a game that is rather similar to Portal. It’s science fiction in which scientific progress and capitalism causes chaos and a lot of dry humour over the PA. Oh, and just to drive the point home, there’s all manner of references to Valve’s franchise. Usually, this would be career suicide, but Lightmatter gets away with it. In the field of gameplay quality, Lightmatter and Portal are peers. Although it is not perfect.

I had issues with the game on a technical level. I don’t talk about bugs a lot. I’m lucky in that I don’t run into them much. Also, it’s difficult to divorce bugs from my computer screwing up. But it would be dishonest to claim I had a smooth ride. They just started up for no reason, so I suspect it was an update. Fiddling with the options helped a bit, but hopefully another update can resolve any issues just as quickly. So hey, all the more reason that a demo is a good choice, you can test out how it performs on your set up.

The other issue is a bit more finicky, but at least it isn’t something wrong with my computer. Basically, though I loved the jokes and references, it leaves the narrative rather anaemic. I suppose it’s probably more of a scope thing. The story in Lightmatter is communicated entirely through intercom chatter and occasional recordings. From the start of the game, the main cataclysm around which the plot orbits is already in the past. The Portal nods add a nice flavour. Although as it turns out, there is isn’t a decent amount of actual narrative substance on display.

There are criticisms to be had, but overall Lightmatter is a slam dunk. It’s been so long since I have felt quite as satisfied as this game has left me. Each puzzle is difficult enough to feel accomplishment upon completing. Yet, I never felt truly discouraged by any of them. The use of shadows to control the fail states puts you in this heightened state of awareness. This game compares itself to Portal and some may consider it arrogant. Yes, the narrative exhausts me. However, at the risk of being sacrilegious, I believe Lightmatter is the first game I’ve played that, gameplay-wise, feels like a peer of Portal.