Crowdfunded Metroidvania darling Bloodstained: Ritual of the Night released last year to positive critical acclaim, including by us. Beyond its base campaign and already significant amount of content, several stretch goals in the form of new modes were planned. Unfortunately, one such additional mode, the Roguelike mode, which would provide randomly generated castles for Miriam to explore, will not be released as planned. Instead, a “randomizer” mode will be released in its place.

According to the game’s publisher, 505 Games, Bloodstained’s game code “created in the game’s early development” — was not compatible with roguelike gameplay, “especially a procedurally generated castle”. As the mode was a stretch goal, and the company still wanted to release a substantial update for the game, a new game mode called “Randomizer” will be taking its place.

The details of this new mode are detailed on the Bloodstained: Ritual of the Night’s Kickstarter page. When starting a new game with Randomizer mode engaged, the player can select variables from eight different parameters. These include the distribution of items and shards, to the selection in shops, to the game’s win condition. Despite the random elements, even a randomizer playthrough has safeguards to ensure game-critical upgrades are found normally to ensure the game is still playable. 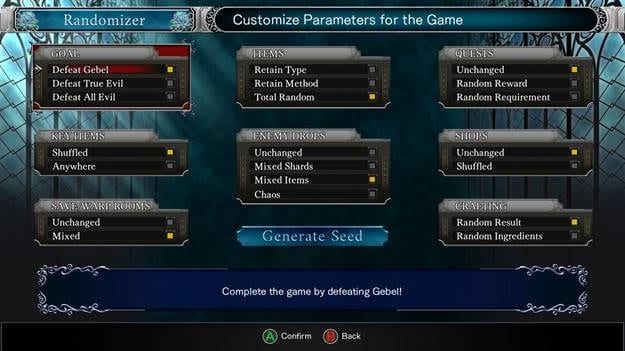 Once the player has selected their variants, it will create a seed that can be shared with other players. A randomizer play-through will also track the player’s time through the game. At the end of a run, your time will be displayed, allowing players to compete against one another.

Admittedly, it is disappointing to not get a proper roguelike mode for Bloodstained: Ritual of the Night, even if the explanation is totally reasonable. While the base game is already bursting with content (and has plenty more on the way), it would have been amazing to have a truly roguelike kind of experience with the game. However, credit to the developers for trying to release a substantial game mode in its place, despite the technical limitations they were working with.  It is hard to argue with new content when it is arriving for free.

Randomizer mode is set to release alongside Zangetsu mode, which will make the game’s recurring boss a playable character. There is currently no announced release date for the upcoming content. However, the Kickstarter page states that there are more details to come. Hopefully, a release date for Bloodstained’s upcoming new modes will be right around the corner.