In a sad piece of news for our online gaming news industry, New Zealand-based outlet Gameplanet has announced it will be shutting down permanently in the next few days. While acknowledging the far-reaching impact of the recent worldwide economic crash, editor in chief Simon Garner states that the writing had been on the wall for a while.

“Gameplanet has had an amazing 20 year journey filled with many great highlights”, writes Garner in a final editorial on the site. “I thank you all for being part of it with me, for supporting us with your readership, your encouragement, and your contributions”. Gameplanet.co.nz has been operating out of New Zealand and writing news articles, features and reviews for 20 years. 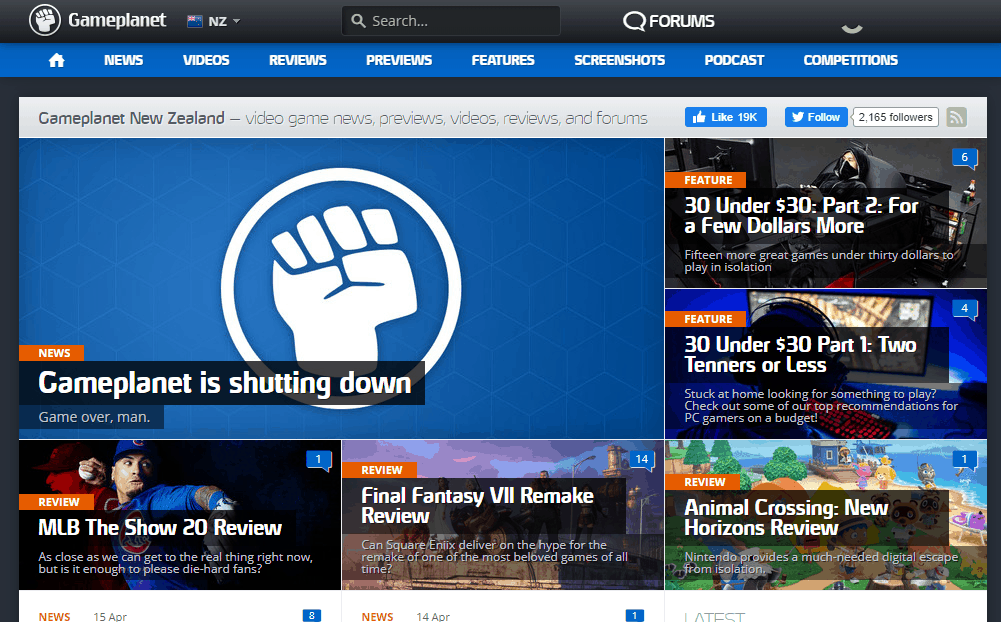 Our own editor in chief at Checkpoint, Luke Mitchell, had a few words to say about the end of Gameplanet. “It’s often viewed as a gamers dream to write for or run a successful video game website, but more often than not the realities of a crowded digital landscape and the cost of operations make this next to impossible. While Checkpoint has only been around for 6 years (so far), it’s awful to see another long running ANZ publication with a history the likes of Gameplanet shut down; so as they said in their post, it’s more important than ever to support independent media and independent voices whenever and however you can.”

While Gameplanet will no longer be producing new reviews or articles, Garner hopes to keep its community alive. GP Forums, a place for Gameplanet readers and fans to discuss their interests, is offline now, but will return in some form soon once it has been migrated onto the Tapatalks platform, where it might live on. Hopefully those that have made a community there will continue to thrive, even while the original site has ended.

The shutting down of Gameplanet is a reminder that nothing will last forever. Checkpoint is only 6 years old, and would be lucky to have a run as long as Gameplanet had. Times have been tough for online media for several years. In particular, ad revenue has ceased being a viable business model for many sites. As such, it has been difficult for outlets to balance raising funds and keeping themselves available for their community. We wish the best for the writers at Gameplanet, and hope they can find further great opportunities in the future.