Just a few days after its announcement, Sony has delayed the forthcoming PlayStation 5 showcase event. It was originally slated for later this week, on June 5th. The tough, but fair call was made so that “more important voices can be heard,” acknowledging the ongoing protests against police brutality and murder of George Floyd that are occurring in the United States. We’ve included PlayStation’s tweet regarding the event delaying below. 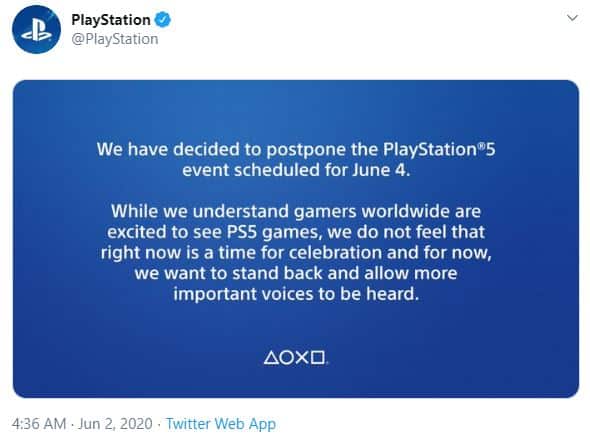 Sony’s PlayStation 5 event was only announced on Saturday. The event was due to announce some big news, quite notably some of the game lineup for the new console. This, in particular, got fans excited, due to the caginess Sony has shown in regards to the PlayStation 5 up to this point. Since then, we’ve had a weekend full of protests in the U.S, an entirely monumental moment in the Black Lives Matter movement.

As gamers (for better or worse) have been known to be quite vocal, quite a few have voiced their disdain for this announcement. Sony, who prior to this announcement tweeted a message of support with ‘#BlackLivesMatter,’ saw complaints when voicing this support. The company even went as far as to blast back. “I don’t mind this, but everyone matters, not just blacks,” someone replied. Sony went one further, replying “Then say black lives matter.” A particular coy and slamming comment against the phrase “All Lives Matter,” something often used to silence the BLM movement. Additionally, there’s just this great reply from Sony: 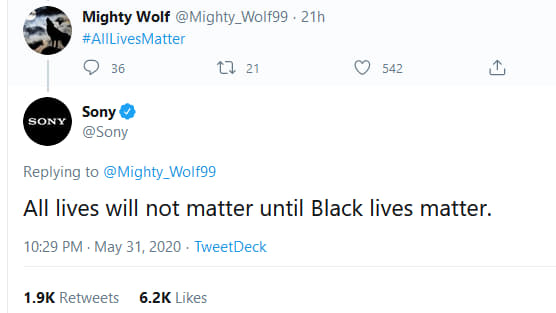 It’s expected that fans are eager for details of the forthcoming next-gen console. Still, there’s a time and place for celebration. During a momentous movement is absolutely not one of them. PlayStation 5 news will come, people just have to wait. There’s more pressing matters at this moment. This news also comes after EA postponed their Madden 21 trailer just yesterday.