I boot up the game. That old familiar ship, the Unreliable, appears and is floating through orbit. The achingly beautiful and equally haunting main theme chimes in as I arrive at the game’s menu title card. I’m home once more. I’ve returned home in The Outer Worlds.

The Outer Worlds was a game I personally absolutely adored last year. I’m not alone either. Checkpoint named it the Game of the Year for 2019. It was a hotly anticipated space opera RPG from Obsidian, the makers of Fallout: New Vegas. Plenty of commentary on capitalism, space, charming companions and humour – and did I say space? It’s clear this was very much planning to be the spiritual successor to New Vegas. Succeed in that it did. So, when provided with the opportunity to jump back into the game’s world, this time on the Nintendo Switch, how could I say no?

As with any big AAA ports in recent time finding their way to the Nintendo Switch, there are nerves leading up to their release about their technical quality. With it being both a portable and home console hybrid, there’s only so much the device can do. So, yes, as expected, some sacrifices were made for this release. The game ‘targets’ 30FPS, with a 720p quality in portable mode and 1080p docked.

Due to this, the game no doubt looks rough around the edges at times. I played a majority so far portable, and noticed quite small render distances. Anything more than a few feet away from the player has a bit of a blur to it. At the best of times, it’s small details like posters on walls and nature not looking as good unless you’re in their immediate vicinity. In the worst, it’s character’s faces the slightest bit blurred when conversing with them, even noticing textures load in a bit mid-conversation. A few times I found myself squinting, second-guessing my own eyes. Hell, even one interaction had a character’s face a tiny bit glitched, looking like a concerning and gaping scar rather than a dimple. I’ve included that for you below. 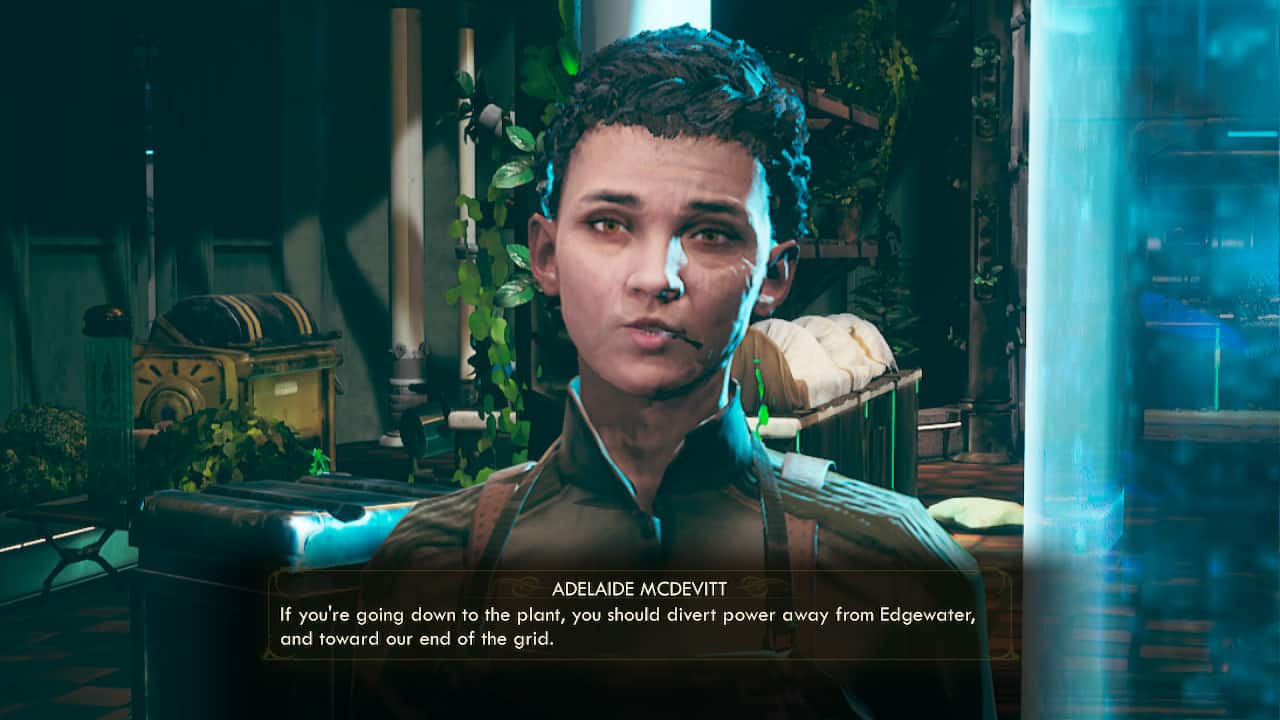 Not the best way to experience (or re-experience) The Outer Worlds, but a welcome one

As it’s a first-person shooter on a Nintendo console, gyro controls are, predictably, included on offer. I gave these a go myself both by moving the entire Switch around portably and while docked. They work about as well as you’d expect and just come down to preference and the fact that most people have moved on from this method. Still, it doesn’t hurt or take away that the options there for players.

Most of all, I loved having an excuse to just jump back into the game’s world for another play-through. I fell in love all over again. The dry wit the game has about capitalism. The sweet and passionate lesbian asexual icon Parvarti. The hilarious deadpan of ADA. Even Felix’s charming buffoonery. It’s all as lovable as ever and I’m glad I have a means of playing the game wherever I want now.

It’s quite obviously and undoubtedly not the best way to play The Outer Worlds, but I wouldn’t go on the record of calling it a bad port. It’s definitely messy but not deterring so long as you’re not one heavily invested in graphics. The game serves its purpose: a Nintendo Switch port of a fantastic game with some graphical compromise. If you’re keen on revisiting or it’s your only means of playing, then I implore you to at least give it a try. Even not under the most polished coat of paint, The Outer Worlds is still quite magical.