Bomb Rush Cyberfunk: you want Jet Set Radio? We got you.

It isn’t news that people have been begging for a new Jet Set Radio game, you know, that rollerblading game with the banging soundtrack? As it stands, SEGA has made little effort to actually produce a continuation to the well-loved game, and this is where Team Reptile has stepped in. They’re the indie studio responsible for the creation of Lethal League, and is now releasing Bomb Rush Cyberfunk. It takes only one glance to see what this game is, a spiritual successor to Jet Set Radio; and with no official sequel in sight, it’s announcement has been very welcome.

Along with the teaser trailer, a new Steam listing has also appeared for the game. According to the description, it will let players “dance, paint, trick, face off with the cops and stake your claim to the extrusions and cavities of a sprawling metropolis in an alternate future.” Everything about the trailer screams Jet Set Radio, especially the music, which fans will be thrilled to know is scored by original composer Hideki Naganuma. This is exciting news, because the soundtrack was such an important part of the original game. 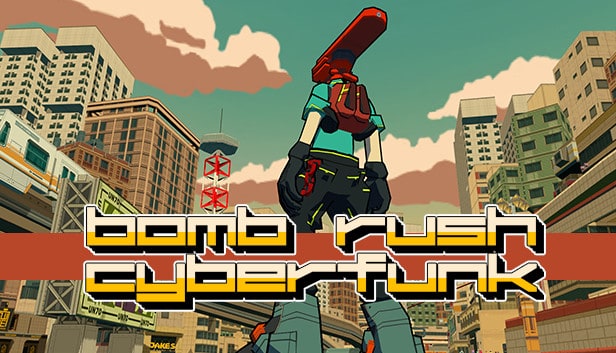 The teaser trailer for Bomb Rush Cyberfunk shows off all the classic Jet Set stylings including the rail-grinding, tagging, and dancing. With the classic cel-shaded visuals to seal the funky deal. The game’s description also talks about “personal boostpacks” that can be used to slide, jump, and airdash through the streets. So it looks like there are going to be new additions to the familiar gameplay, and one can’t help but wonder what other things are going to be added to keep the game fresh. We’ve come a long way since the Dreamcast, after all. Bomb Rush Cyberfunk is currently set to release sometime next year, so keep your eyes for more information that is sure to come in the near future.