Fall Guys: Ultimate Knockout is just coming off a gangbusters closed beta weekend, which saw the crazy online party game regularly featuring near the top of Twitch streaming charts and getting shared frequently across social media.

The premise is pretty simple; taking cues from Takeshi’s Castle and Wipeout, Fall Guys features a bunch of crazy mini-games that have you avoiding obstacles, jumping over platforms and trying not to get knocked off of stuff until you are the last one standing. Games always start with 60 competitors and last over 5 rounds; you’ll need a combination of luck and skill to be able to become crowned the Ultimate Fall Guy. Like I finally was after clawing my way to victory yesterday afternoon.

All of the rounds in Fall Guys make for a pretty great time. Elliot and I spent probably too many hours of our weekend playing together, cackling maniacally as we moved our little Tic Tac character through obstacles, even in defeat. The first round is usually a race of sorts, as you try to leap over spinning platforms, leaping over tricky see-saws or crash through doors (some of which are unbreakable walls). It progresses with a variety of other games like standing on a rotating platform and trying not to fall through the gaps to survive, and even features some team games such as soccer or tail-tag.

The team rounds are where Fall Guys loses a little bit of its charm, for us at least. The only controls in the game apart from movement are jump, dive and grab – and the team games often rely on you grabbing something like an egg to drop in to your zone or grab onto another player. Whether it’s lag or just the floaty nature of the game (which in other rounds adds to the fun chaos), these games just don’t feel as polished or “fair” as the rounds where you only rely on racing and jumping. On top of this, if you’re put with a team of random people and they let the side down, you get eliminated, so sometimes it’s out of your control and is always in either round 3 or 4, which can be disappointing. 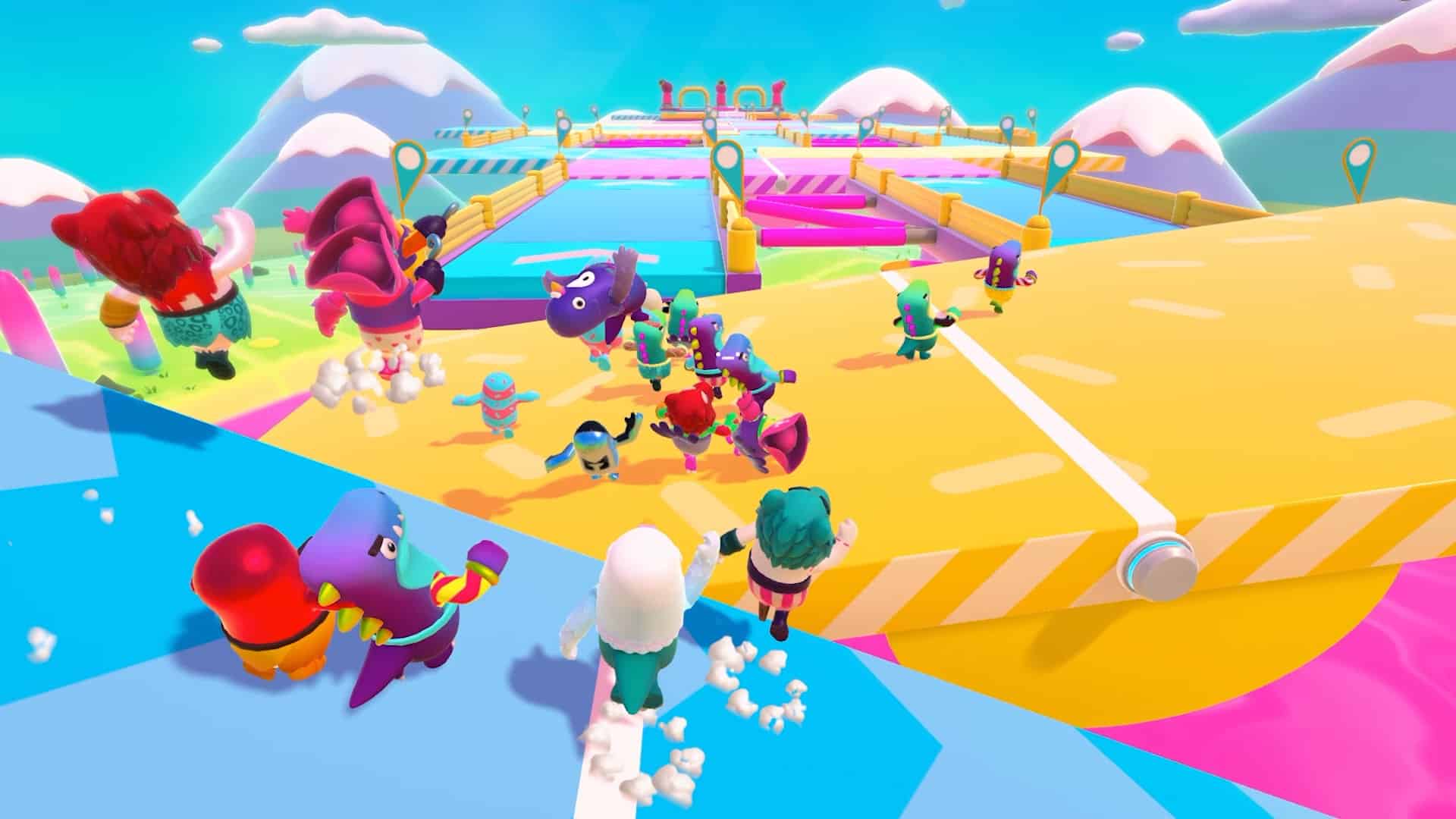 The Reddit and Discord were both discussing this at length, and the sentiment across the board seemed to be that team rounds were the least popular. By the last phase of the 48 hour beta, Elliot and I noticed that team rounds were only rarely showing up, as opposed to being almost guaranteed every round at the beginning of the weekend, so an adjustment was clearly made based on player feedback. if Mediatonic continues to be responsive when it comes to player concerns, it’s safe to say Fall Guys is going to be in good hands moving forward.

The fast-paced and frantic nature of the experience means that it’s very easy to jump in and find a match. Each of the rounds only lasts a couple of minutes, so if you’re successful enough to make it into the final round, the most you’re going to spend overall is 15 minutes before needing to start the fun all over again. With 10-15 players getting knocked out each round, this bodes well for the servers to remain relatively populated with willing competitors, and makes for a fantastic palate-cleanser. I can see myself jumping in for a couple of quick games of Fall Guys at the beginning or end of a night of gaming – that’s if I don’t just spend the entire time playing it on repeat… again.

One thing worth noting is that the Fall Guys Twitter account continues to tease about big PS4 news, as per the tweet below. Considering the game is not on the PlayStation store to pre-order like it is on Steam, it seems pretty likely that the game will feature as a part of people’s PlayStation Plus subscription in August.

That concludes our 48 hour beta weekend playtest. Thank you so much for playing and giving your feedback!

This weekend has been BONKERS

Regardless of whether it ends up a PS Plus freebie or not, Fall Guys is an incredibly fun time that could be just what we all need to get through the remainder of 2020. Fall Guys launches for PS4 and Steam on August 4, but if you’re keen to try it beforehand, the team are hinting at some more beta action next weekend, perhaps even an open beta.

Will you achieve greatness and become the Ultimate Fall Guy?