AJ & Magnus is a popular queer comic strip about the Parker family: a young boy, AJ, his talking dog Magnus and his two dads, Alex and John (or, Dad and Pop) – and their newest adventure will be experienced as an actual video game. The comic is co-created by real life husbands Bryan and Simon Steel, who will also be working on the video game together.

The JRPG was announced on their Patreon page yesterday, with the game intended to be a parody as AJ & Magnus find themselves trapped in a “generic RPG” featuring all the staple mechanics and story quests. Currently titled “Dungeons and Doggos: An AJ & Magnus Adventure”, supporting the creators will give you access to the game builds for Windows and Mac. Their plan eventually is to, ideally, launch the game on mobile as well for everybody to enjoy.

Checkpoint had a chat with one of the co-creators Bryan Steel, about the humble beginnings of the comic and how far it has come. Being a fan of comics their whole lives, Bryan and Simon both noticed that there were no gay characters they could identify with – something the queer community often struggles with in all forms of media. After a camping trip with their 8 year old nephew and their English Mastiff, they were inspired to create a comic based on a fictionalised version of themselves. 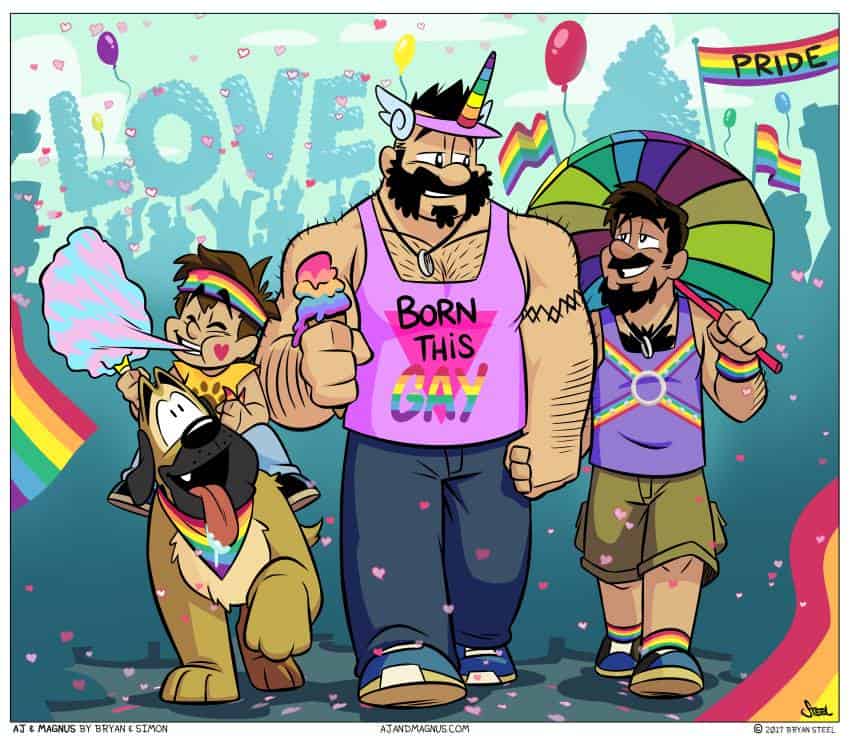 Running since August 2014, AJ & Magnus is often light-hearted and silly, but capable of packing the occasional emotional punch for queer folk everywhere. “We started the comic among a lot of toxic family and we originally struggled with the comic dealing with that but looking back the tone was a little darker, more cynical.” says Bryan. “Today we still deal with topics like toxic family but I feel like we handle them better.”

The comic often talks about more serious issues that queer people experience in real life, such as family struggles, toxicity, homophobia, and just generally the challenge of not being ‘a conventional family unit’. I’ve also always appreciated that Alex and John are well portrayed as gay men, never caricatures but absolutely queer as hell, and resembling the look of bigger, bear-bodied guys, which this bear certainly appreciates.

So, why a JRPG? Bryan has a history in making video games, working on titles such as Command & Conquer along with a range of smaller indies over the past 20 years, so this transition for AJ & Magnus feels like it was just a matter of time. “I’ve always thought AJ & Magnus would be great in a game, but it always seemed like the wrong time. After spending time with a dev tool called RPG Maker, I felt inspired I could make something quality while not creating a tremendous extra work load for Simon, who does all the artwork.” Bryan continues. “We’re always looking for ways to reach a broader audience and we thought a retro style RPG would be a fun way to do that.” 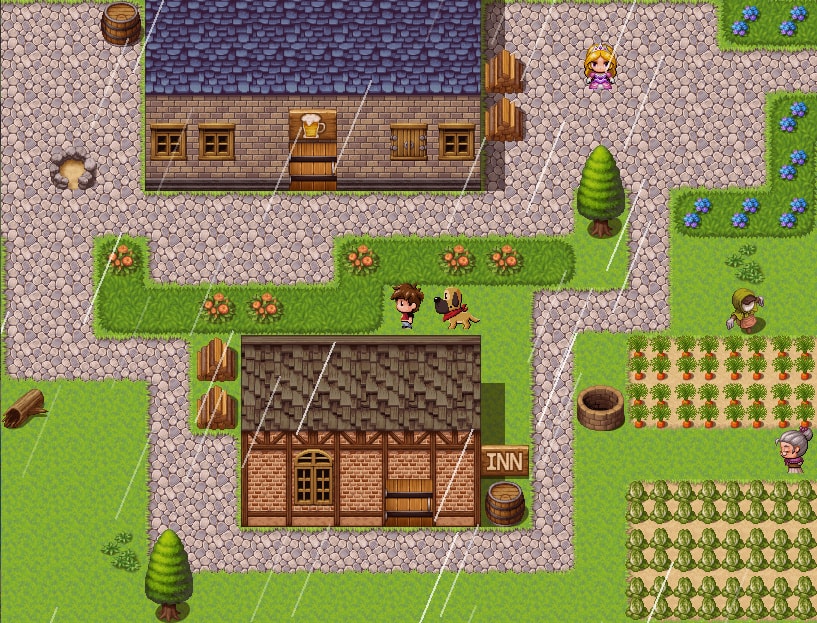 Part of the inspiration to turn AJ & Magnus into a comic is the fact that that Bryan has never worked on a game that had any LGBTQIA+ characters, and the fact that the industry is lacking in them in general. “Looking back on it I believe it was because I was so used to hiding who I was that I never wanted to draw attention to “gay” anything. I was trying to create content that would “fit in” and be mainstream. Since then I realised had I felt more confident in myself I would have handled things differently.” says Bryan. “Representation is very important, it’s why we started the comic in the first place. Now I want to take my skills and challenge myself to really create stories and characters LGBTQ+ people can relate to and feel inspired by. I don’t want anyone growing up today to feel like I did for so long and I think this game will be a great way to spread a positive message.”

Considering the titular duo have a love of cosplay and pop culture, their banter should translate well into a video game RPG that sounds very much like it will be poking fun at itself. Dungeons and Doggos is sure to feature a main story, as well as plenty of side-quests and characters that will, much like the comic, cover topics from sincere to silly.

Bryan was sure to add that the size of the game is entirely depending on the support they can can get from their Patreon friends and supporters. “Right now we’re expecting a very small project but if we’re able to get enough support we can put it into the project and even bring in other talented LGBTQIA+ artists we’d love to work with. It takes a community to achieve anything and we’re hoping we can get the support of ours”.

To support their Patreon and the development of Dungeons and Doggos: An AJ & Magnus Adventure and access their (very large) collection of comics featuring the modern queer family, head here, check out their official website and give them a follow on Facebook as well.