Sally Face has been summoned to the Nintendo Switch

The saga of Sally Face began with its initial release of episode 1 on PC in 2016. As of yesterday, with the hard work of Steve Gabry (Portable Moose) and the help of Mike Thomas (Wither Studios), Sally Face has been ported and released onto the Nintendo Switch!

Sally Face is a story-driven, 2D side-scrolling dark adventure game set around a young boy with a prosthetic face, his friends, and the unsettling mysteries unravelling in their small home town. The game consists of 5 episodes, with the first being a short introduction into Sally Face’s nightmarish world. For the Switch version of the game, all 5 episodes are included. Though there are only digital copies available from Nintendo’s eShop. No physical copies, sorry folks.

Steve has mentioned on his Twitter @PortableMoose that if the game is unavailable in your country, you are able to get around that little snag and buy it by creating a profile set in another region. 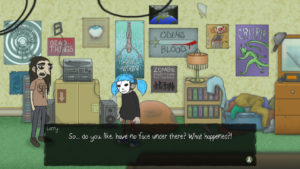 I may be speaking from my own personal bias as a deep Sally Face fan, but I highly recommend this game to lovers of unsettling horrors, ghosts and emotional stories. It still blows my mind that with the heart and dedication of a solo-dev-team, an overwhelmingly positively received game and fanbase was born. Yes, you heard that right. The entire game was made art, music, story and all by one person. ONE.

I urge you to jump onto your Switch, give it a shot and I promise, you will not regret it!