Blizzard Arcade Collection is definitely one of my favourite announcements from BlizzConline 2021. It features three classic early 90s Blizzard games and is out now across the major consoles and PC. The titles included are The Lost Vikings, Rock ‘N Roll Racing and Blackthorne. The collection features the option to play them as they were originally or a ‘definitive’ version which includes things like save states, rewind and a watch mode.

Although this is titled “Blizzard Arcade Collection” none of these titles were actually released in arcades; they made their debuts on SNES, Mega Drive and the AMIGA computer back in the early 90s. The other thing is that these games have stood up to time incredibly well, The Lost Vikings and Rock ‘N Roll Racing in particular are still genuinely fun to play.

The Lost Vikings was first released for the SNES in 1993, it was then ported to the AMIGA, DOS and Mega Drive shortly after. This is a side scrolling puzzle/platform/adventure game where you control three kidnapped Vikings and guide them through multiple levels. The player can switch between them in real time and guide them one by one through the stage. Each Viking has a unique ability and you will need to use them all in the right sections to make it through each level.

Rock ‘N Roll Racing is a combat racing game with an isometric viewpoint released in 1993 for SNES and Mega Drive, it’s like Micro Machines but with weapons. It pits four racers against each other as you work your way through multiple courses on themed planets. Between races you can spend any money you earned to upgrade your vehicle and weapons. Whilst the original featured chiptune renditions of popular rock songs, the definitive version on this collection features the actual recordings. This is my pick of the bunch, it is a game I still regularly play and enjoy.

Blackthorne is a cinematic platform game first released on SNES and DOS in 1994 and was ported to SEGA’s ill fated 32X in enhanced form the following year. Gameplay involves 17 large maze type stages where the player runs, jumps and climbs throughout the areas locating keys and items. It features gun based combat where both the player and enemies can press themselves against the walls to avoid incoming fire. At the time of release it was highly praised noting its dark tone, smooth animation and intelligent gameplay. For me though, I think this has aged the worst out of the three and playing it these days feels a little dull, but your mileage may vary. 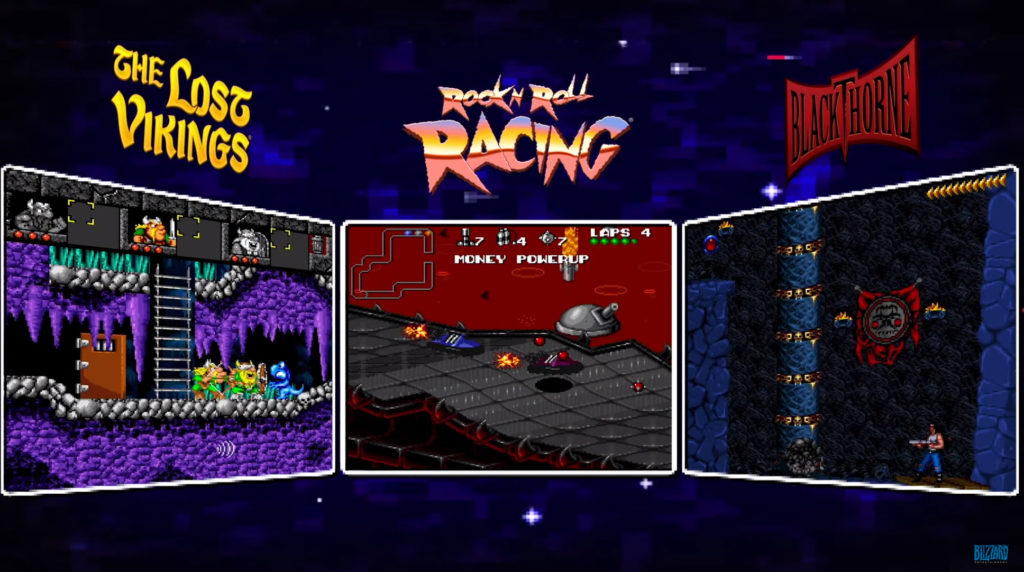 Blizzard Arcade Collection is a solid set of some great games from the Blizzard vaults; all three games included are great titles in their own right and are still enjoyable today. Whilst The Lost Vikings is probably the most well known of the three, I am glad that Rock ‘N Roll Racing and Blackthorne have been included for a new generation to enjoy.