BlizzConline kicks off with World of Warcraft Shadowlands: Chains of Domination

BlizzCon 2021 has begun! Blizzard Activision’s yearly convention is once again being held online due to COVID-19, and has lovingly dubbed it ‘BlizzConline”. Their schedule details when all the panels and Keynote speeches will be happening, but we’ve already seen the first big stream of the con. The first livestream of the day included the opening ceremony and several cool announcements, the first of which was World of Warcraft expansion Shadowlands: Chains of Domination.

This is the first major content expansion for the Shadowlands expansion, and will revolve around the player’s continued battle against the Jailer, ruler of the Maw. The trailer reveals a bit about what happened to King Anduin Wrynn after his fate in Torghast. To put it simply, it doesn’t look good. It seems as if he’s been put under the sway of the Jailer and is now forced to do his bidding.

Patch 9.1 of Chains of Domination unlocks a new area full of storylines and quests in Korthia, the city of secrets. It also has an eight-boss Mythic dungeon called Tazavesh, the veiled market. The main raid will be the Sanctum of Domination, a 10-boss raid, in which players will finally be able to face off against former Horde leader Sylvanas Windrunner. She has with her a ‘terrible new champion‘, which might just be the poor Anduin Wrynn. 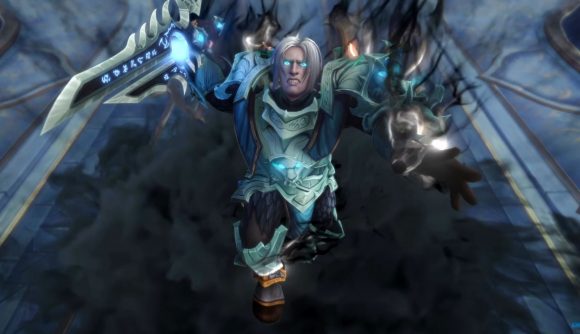 There’s more news to come for Blizzconline, including Overwatch 2, and a deep dive into Diablo IV, so stay tuned! You cand watch the first full stream for Blizzconline here.