2021 is definitely a year for indies to shine. There are so many quality independent titles, that its invariable that some may slip past the radar. In fact, if I didn’t stumble upon Rhythm Doctor in one of the many Steam Demo Events, I would have missed it entirely. It almost feels like too simple of an idea to get off the ground. Yet, that’s almost its biggest strength.

The mark of a great independent title is core gameplay that is simple but effective. Indie projects of all mediums need this, the ability to do a lot with only a little bit of work. It can be the foundation of something spectacular. Such is the case of the recent Early Access debut: Rhythm Doctor. In a year that many predict will be rather empty, Rhythm Doctor is a game that in any year would be a true standout achievement.

It’s astonishing that a game so stripped back would shoot to the top of my GOTY radar. The developers took inspiration from the work of Rhythm Heaven’s simple tap, life and flick approach to gameplay. They decided to take it back further. The entire gameplay is single button taps, space for solo play, and the shifts for co-op. The first iteration is simple: Here are six beats, tap out the seventh. Most of the gameplay levels are this basic. But the work to distract, to confound and to throw off isn’t just set dressing, it’s where the game shines. Consider the first boss fight. Under the pretence of a “WiFi blocking virus”, the game glitches out the audio and video. Firstly, hot damn this is crazy glitchy music so that’s a plus. But of course, this makes it all the more challenging to your internal metronome.

Gameplay works on establishing similarly simple rhythmic gestures and then throwing you off the scent. Beats may skip or “swing”, meaning the beat lengths vary. Later levels have you take on multiple patients, requiring you to track multiple rhythmic lines simultaneously. Each level also has a “night shift”, an unlockable challenge version of the level. Suffice to say, as straightforward as the game may seem, there’s a lot of tricks on offer that Rhythm Doctor can challenge you with. 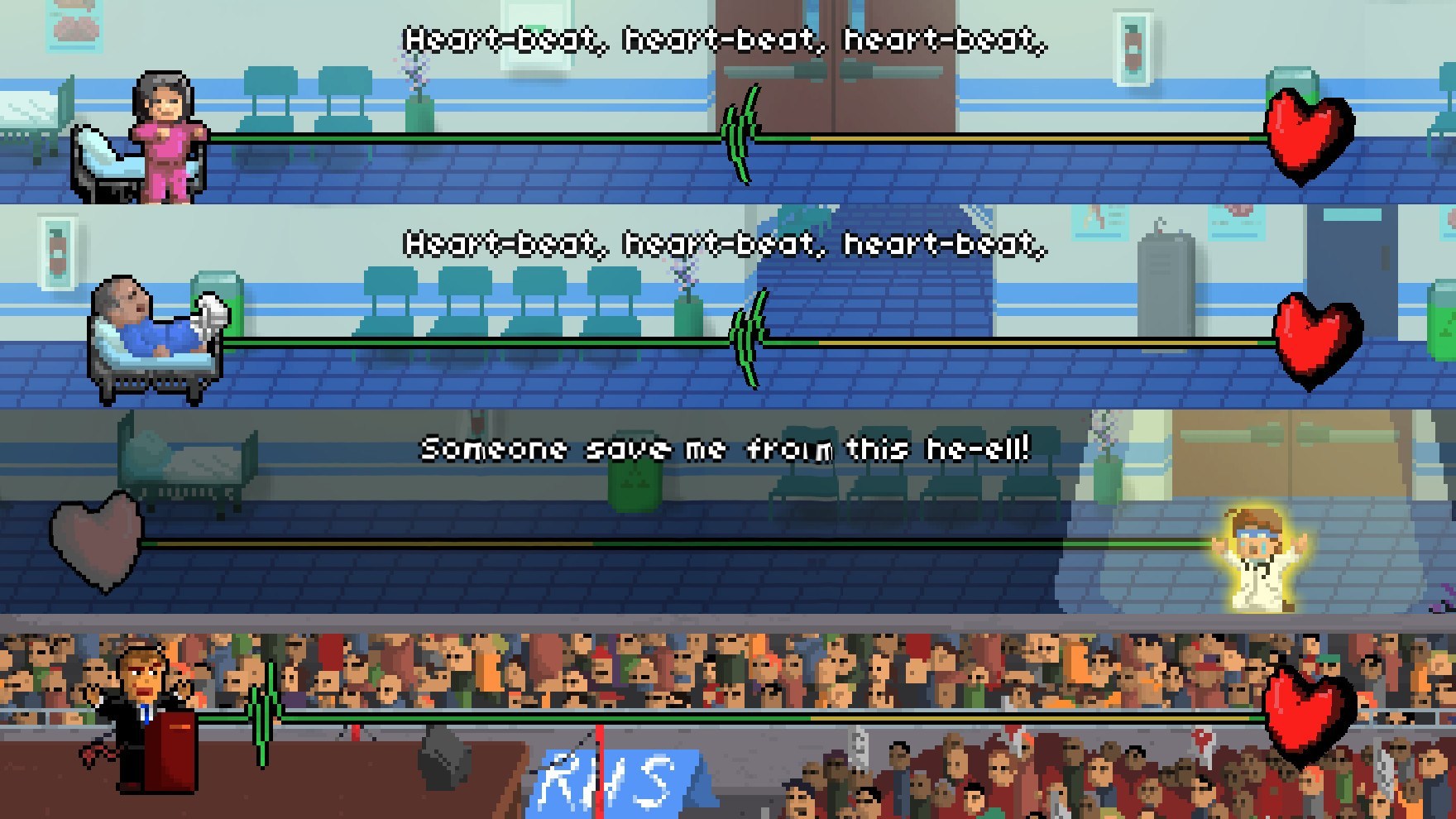 All this doesn’t even touch on the production values. The pixel visuals are a sight to behold, but the audio is the centrepiece. The songs are phenomenal with a lot of different styles and moods. This all wonderfully complements the stories on offer. These range from cheesy love EDM tracks to acoustic narrative pieces about the stress of working a hospital shift. It’s a weird, wonderful, Elite Beat adjacent feel to the narrative meshing with the music. A lot of work has put into everything you see and hear.

It is worth keeping in mind that Rhythm Doctor is still in Early Access. As of writing, there are four acts of the game’s story mode. There isn’t an explicit line about the amount of remaining content. I’d guess two more acts remain based on the percentage completed. There is also a level editor, allowing you to make custom levels that will gain features, including an in-game tutorial, over the Early Access period. Further work is being done to bring the co-op side of the gameplay up to speed. As of writing, Rhythm Doctor intends to be in Early Access for around a year.

I am excited for more content, and a conclusion to Rhythm Doctor’s story. Having said that, I still think this an absolute top-shelf game in its current state. It’s one of the best quality rhythm games I have seen in a very long time, and it is my favourite game of the year thus far.