The month of June is Pride Month, a time for the LGBTQIA+ community to be Out, Loud, and Proud. In recent years Pride has really broken into the mainstream, which is great for all the obvious reasons, but it also means that some games publishers have seen fit to start “celebrating Pride” the only way they know how: creating in-game events and sharing their vague support on social media. That may sound cynical, but it’s hard not to be cynical when you see an in-game challenge as tone-deaf as the one Injustice 2 Mobile pulled this week.

As was first reported by TechRaptor, one of Injustice 2 Mobile’s Global Challenges as part of Pride month was introduced as follows:

“With the help of Multiverse Armored Supergirl, Darkseid was stopped and Classic Superman is free from his clutches. The destruction left in his wake has sent Entangling Poison Ivy on a rampage!
Now is the time to put aside our differences, work together and help Heartbreaker Harley Quinn show that Friendship and Love can conquer all! We are once again sending out a call for help to all heroes across the globe, help stop Entangling Poison Ivy by defeating her in Challenge Mode. Work together!”

And how do you help Harley Quinn calm her raging girlfriend? Beat her up, of course! According to the event, the more players defeated her, the higher tier of reward everyone would receive at the end of the event. In a now-deleted tweet, Injustice 2 Mobile celebrated how many times Poison Ivy had been “taken down” so far: 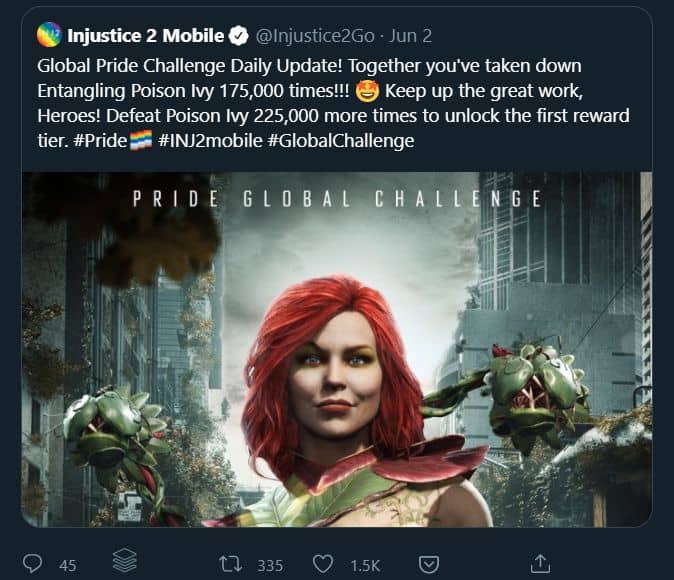 I can’t imagine that this was done with malicious intent. Injustice 2 Mobile is a fighting game after all, and under normal circumstances, nobody would blink an eye at an event where you beat up Poison Ivy, one of DC’s most iconic Batman villains. It’s easy to see how the people in charge of this decision might carelessly slap Pride’s name on a standard event and call it a day. But what we’ve ended up with is an event where players are directed to beat up a bisexual woman in the name of Pride. Twitter users were quick to point out that LGBTQIA+ people face real-life violence every day, and that the event was in incredibly poor taste.

Despite claiming to understand where they went wrong, the event continued for several hours until it ended on its original schedule.

It’s frustrating that Pride month must always be tainted by some poorly conceived event like this. The fact that the event was probably not malicious is of little comfort. Most of these situations are caused not by maliciousness but by non-understanding and carelessness, and at the end of the day, it serves to make their supportive words seem ingenuine. For all their rainbow icons and pretty words, games publishers will not be truly supportive of the queer community until they stop pulling stunts like this.