Boyfriend Dungeon, the hotly released dating sim rogue-like fusion dropped last week. Already, it seems it’s been susceptible to discourse on the internet. You see, in-between all the sweet and cosy romances offered in-game, there’s one that turns sour. Despite offering an initial content warning to the natures of this individual, some players have deemed that’s not enough.

The story goes as such. Soon into the game players will meet the character Eric. They play an integral role in the game, not only as a dating option but narratively and with the key mechanic of purchasing craftable items off of them. Talk more and more with him and it becomes clear of his true nature. They follow a stalker archetype, sending texts that are negging in nature, leaving gifts at your door despite not being informed of your address, insult others and yourself to get closer to you. The whole works.

The discussion has popped up about content warnings and consent in video games once more as a result of this. Tweets such as the following have popped up online. 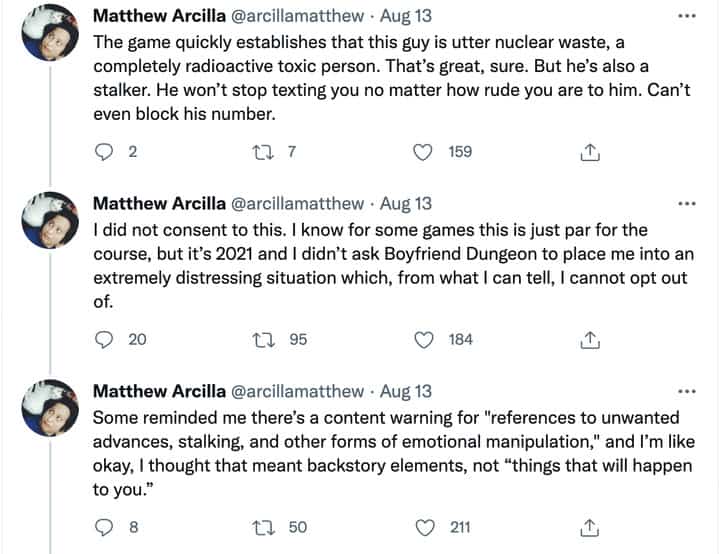 It’s clear then why this has been triggering for some people. Some have deemed the content warning isn’t sufficient, others have requested the character and relevant content to be removed entirely. Developer Kitfox Games have at least responded to the former request. The following response was issued via tweet:

The content warning for Boyfriend Dungeon inadequately describes the events of stalking and emotional manipulation that exist in the story. We'll update the game next week with a more accurate CW. We apologize for any hurt inflicted by our mistake. Thank you for playing!

So there you have it. Kitfox has at least responded to some requests. Making a more apt content warning is absolutely the right move. Removing and changing content is another can of worms.

Have you played Boyfriend Dungeon yet? What say you of the discourse? It’s currently available on Switch, Xbox and PC via Steam. If you dare.