Some of the new gameplay mechanics include using the triggers to allow the player to strafe laterally and also the ability to drift. All of the different vehicles have their own attributes (Speed, Weight etc) and also have a health meter, so crashing or being attacked by your competitors could end your race.

Ion Driver certainly brings back the feeling of futuristic spaceship racing games that were all the rage back in the day, with their techno soundtracks and (for the time) stunning visuals and design. Wipeout is certainly the most well known, but Extreme-G for the Nintendo 64 comes to mind and of course the popular F-Zero that is crying for a reboot. It’s nice to see a new game following on from those legends.

Ion Driver has been developed by Spanish developers Moon Whale Studio as part of the “PlayStation Talents” program. This initiative was launched in 2015 By Sony Interactive Entertainment in Spain and aims to support and develop local creativity. It also aims to create video games fully developed in Spain that can be sold around the world. 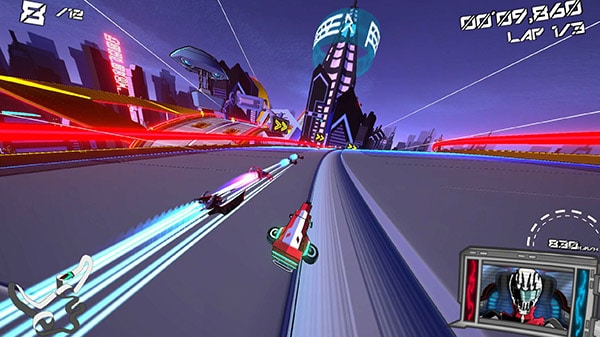 So, if games like Wipeout are your thing Ion Driver might be worth checking out. It’s available now from the PlayStation Store.