Will you join the pack or become part of the coven? The choice is yours as we return to the most popular plane in the Magic Universe, Innistrad, with the newest set release Midnight Hunt. Set in the theme of Harvesttide, loosely tied in with Halloween themes, Midnight Hunt focuses on the over arching story between the Witches, Warlocks and Werewolves and their ongoing struggle for supremacy. The sun is dying on Innestrad and giant werewolves are threatening the towns. The coven try to bring back the light with the help of Arlinn Kord and the Gatewatch. If you enjoy the lore of the sets feel free to read the full stories here.

One of the most exciting mechanics returning to Magic are the Double Faced cards. We first saw these in the original Innistrad set in 2011. Like each time Double Faced cards seem to return, a new way to flip them is introduced. This time there is a 2 new game states added to the game. Daybound and Nightbound. This new mechanic makes it quite interesting as any player at the board can affect the game state allowing opponents to flip your werewolves back into their humanoid state. A strategy we may very well see in high end competition.

Flashback has also made a comeback, alongside a very similar mechanic Disturb. Whilst Flashback requires the spellcaster to exile after use, Disturb cards are double faced and morph the card when come into play. A disturbing mechanic to say the least.

Another mechanic that may seem familiar is Coven. We were introduced to Party mechanics back in Zendikar Rising, where creatures and spells could be affected by how many members were in your party. Coven acts similarly with the player needing at least 3 different creatures in play that each have different powers. Some abilities are activated on entering the battlefield, whilst some have activation via mana cost. This makes Coven a much more universal mechanic that could see play outside of Standard format as it plays nice with older cards.

Zombies are incredibly strange on Innistrad as they’re far more fragile than we are used to. Zombie creature tokens now feature Decay, which weakens them significantly and disallows them from blocked and will be sacrificed at the end of combat.

Last but not least lets not forget the Planeswalkers included in Innistrad: Midnight Hunt. Everyone’s favourite shapeshifter, Arlinn Kord, returns as a double faced card showing her wolf form. Arlinn is equipped with the Daybound/Nightbound game state mechanic so you can shift her between the two as the game progresses.

Teferi also, unfortunately, returns with more annoying control mechanics. Many will either recoil or rejoice at his return.

Finally, the dryad Wrenn returns with her new host Seven bringing the needed ramp and graveyard cycling that you’d expect in the Innistrad setting. We were unsure on why Wrenn had moved on but thankfully we were given some explanation from the crew at LoadingReadyRun.

The @loadingreadyrun crew brought some tea, and it is HOT. #MTGMidnight pic.twitter.com/SAJJqmq6Zv

Wizards have again outdone themselves with the alternate border and art within their physical booster packs for those who enjoy collecting. Equinox frames hand drawn from artist Justine Jones are simply divine and are even included on Double Faced Cards. Non-Equinox Legendary creatures also have an alternative showcase art in the gothic horror line art style. Very cool for OG horror fans. Lets not forget the full art basic land set in the same art style which I’m sure we will see in many collections in the future. All of these art styles will also be included in MTG Arena over the course of the set. They can be earned through the Mastery Pass, purchased in store as Daily Deals or Bundles. Midnight Hunt Mastery Pass includes new sleeves and a new set of spooky Giest pets to collect. Sealed, Bot Drafts and Player Drafts are all available to play now. Don’t forget to pick up the new emotes in store which feature a very cute wolf as well as using the code PLAYMID to get your 3 free booster packs of the set. 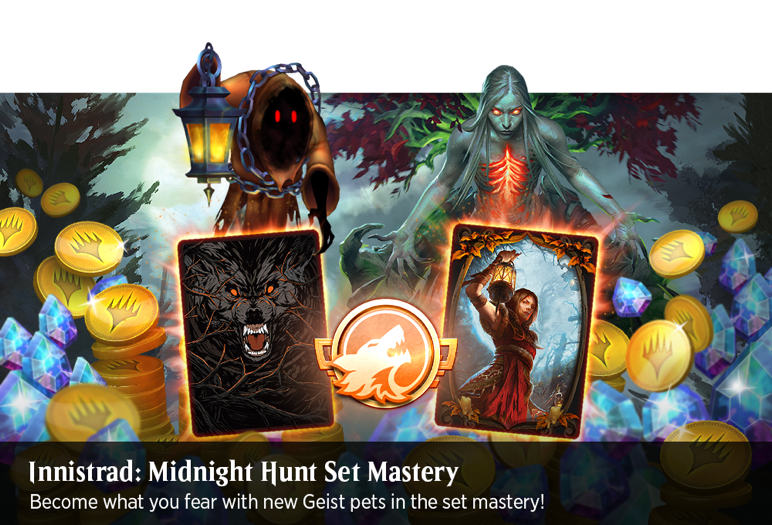 Overall Return to Innistrad: Midnight Hunt set is looking incredibly fun to play in limited and has helped shake up the Standard after rotation. Crimson Vow, the second part of the series, promises to bring more Innistrad chaos in November.

Keen to get stuck into the popular card game? MTG: Arena could be the place to start!