OmegaBot is an adorable retro-inspired 2D platformer developed by Simon Carny and originally released back in June 2022 on PC. Several months down the line, the game has finally received an upgraded console release on PlayStation, Xbox and Nintendo Switch published by Red Art Games. Adding improved visual effects, controller compatibility, and other important quality-of-life features, OmegaBot on console is evidently the ideal way to experience the game. Having played through it, OmegaBot is a short-but-sweet experience that fans of tough, retro-styled platformers like Mega Man and Shovel Knight are sure to get a kick out of.

Taking place in a futuristic society, robot assistants have improved the lives of humanity. However, one day, a mysterious mist appears, turning all organisms it infects into malevolent machines, including humanity’s four greatest heroes who attempted to stop the outbreak. Having retreated across the sea to escape the plague, humanity’s final hope is OmegaBot, a friendly robot whose only goal is stopping the plague and restoring balance to the world.

OmegaBot wears its Mega Man influences on its sleeve, up to and including obtaining new weapons from defeated bosses. Each level also has several secrets and hidden collectables which can be used to purchase new skins which provide passive upgrades. Gears, the currency dropped by enemies and found throughout levels, can also be spent on health and energy improvements.

What sets OmegaBot’s gameplay apart is its unique energy mechanic where your weapons, double jump and dash are all tied to a regenerating energy meter. It introduces an interesting risk/reward element where one has to balance energy use for weapons against enemies, while also preserving sufficient energy to dash and jump your way to safety. Later hazards in the game add in areas where your energy does not recharge, forcing players to be more careful with energy use and to ensure enough is left to make it back to the safe zone to recover.

Another gameplay feature that might be a bit more divisive is the amount of recoil from OmegaBot’s weapons. All of his guns noticeably push the robotic protagonist backwards when fired, meaning that you are practically never still when engaged in a firefight unless you also walk forwards while shooting. The game is partially built around this mechanic, with many gaps between platforms only navigable by firing downwards to get some extra lift. It adds an extra level of challenge when fighting enemies while trying to remain on narrow platforms, and can be tricky to get used to.

The console port of OmegaBot comes with many quality-of-life improvements absent from the original PC release. These changes include amendments to the game’s ending and New Game+ feature, and being able to revert to the last checkpoint from the pause menu. Visual elements, such as rain effects, have also been improved. Finally, and most obviously, OmegaBot on console has full controller support, which is a step up from the PC version’s somewhat inconsistent compatibility with controllers. If you’re playing on PS5, there are even additional DualSense trigger effects, which is a nice touch. 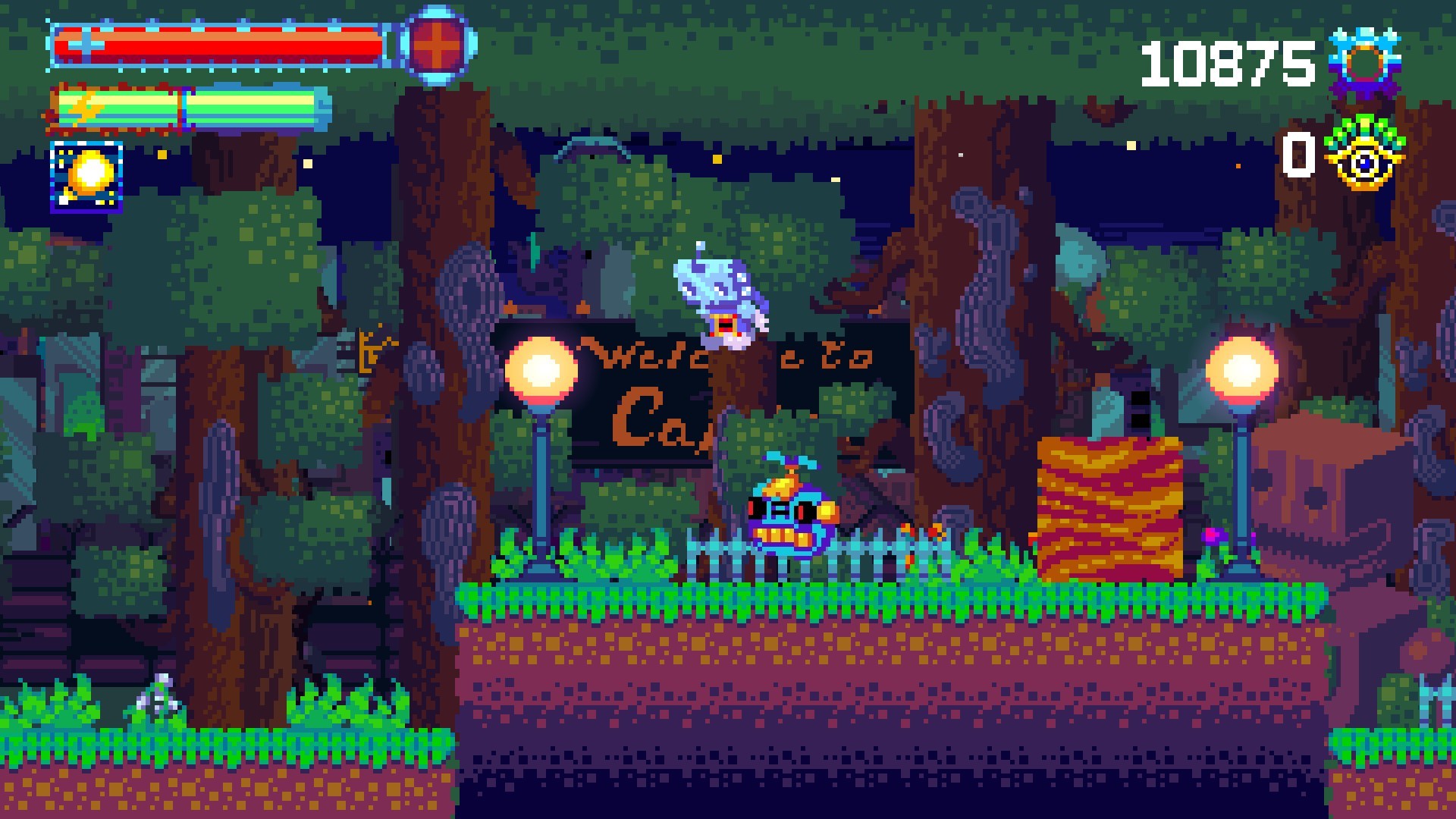 OmegaBot is not an especially long experience, and an inability to revisit past levels outside of New Game+ means that you’re unlikely to spend much time backtracking to hunt for secrets. For those seeking a challenging retro platforming experience, OmegaBot delivers a satisfactory time. Although the controls could stand to be tighter and the gun recoil reduced a bit, the unique energy mechanics and vibrant and colourful retro art style make it a charming little game that truly feels at home on the Switch.