Yoshi’s Woolly World is basically one of the most adorable games I have ever played. I have to open with this, because even from the footage of the game you’ve already seen, you know that the aesthetic is gorgeous. Taking the idea from Kirby’s Epic Yarn a few years back, Woolly World ensures that the wool is not only used as a visual style but also an ongoing variety of clever game mechanics. With this being Yoshi’s first real console adventure since Yoshi’s Story on the Nintendo 64, I’m happy to report that this is a title more than worthy of everybody’s favourite green dinosaur.

At its core, the game is a side-scrolling platformer, but it wouldn’t be fair to just chuck it into that already crowded category. What makes it stand out is the aforementioned wool, which has allowed for a world that feels very comfortable and home-made, with dangling threads and a constantly changing bright colour palette. Not just a style choice however, Yoshi can pull on loose threads to reveal secret areas, thrown yarn balls to create platforms and pathways along with being able to swallow and use things like fire, which is also made out of yarn.

While merely getting through each stage isn’t too complicated for the most part, the longevity of each level and where the real fun comes in, is with the collectibles. Each stage includes five bundles of wool, which if you can figure out how to get all of them will reward you instantly with a new cute character skin that you can then use straight away, effectively ‘rescuing’ that particular Yoshi. Also collectible are the classic daisies, which can open up special stages and also sometimes can prove to be a bit of a challenge. There are also stamps that can be found by collecting beads, and gems that you’ll acquire which can be used to purchase power-ups and perks.

“One of my favourite levels involved jumping from curtain to curtain while they were swiftly flying throughout the stage, which looked pretty stunning and exciting.”

Overall, I wasn’t super inspired to collect the stamps, but I found myself replaying levels where I’d missed a bundle of yarn so that I could complete the set, and one particular power-up you can use actually points you in the direction of hidden items, which made some of the more tricky ones a bit easier to acquire. The fact that there are literally items and pathways which don’t appear on screen unless you physically jump where they are meant to be or throw a yarn ball that direction can be frustrating, as there are no indicators in these cases that there is something there to discover. Scouring levels for collectibles ends up being sort of trial and error at times; I would have preferred it if there were more clear puzzles and challenges rather than the random rewards that are presented. 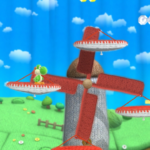 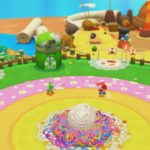 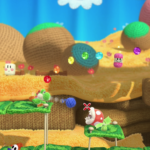 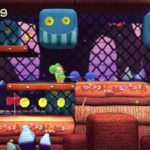 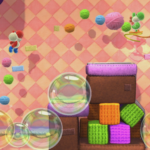 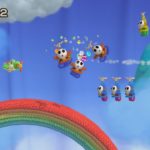 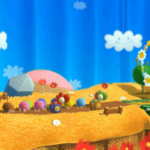 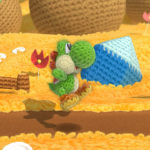 Some of the stages are particularly creative and an absolute joy to play, including one that features curtains moving across the screen, revealing platforms in the silhouettes that you wouldn’t be able to see otherwise, and another stage that requires you to throw baby chickens which creates temporary cotton clouds that you can jump to. One of my favourites involved jumping from curtain to curtain while they were swiftly flying throughout the stage, which tested my focus but also looked pretty stunning and exciting.

The other element of Yoshi’s Woolly World that fell down for me a little bit was the boss battles, which occur every four stages. They’re not too challenging, but the main issue is that they all kind of feel the same, with each one a slight variation on ‘throw a wool ball’ or ‘pull on a piece of wool’ before defeating them with a ground pound and then repeating the process. I think if they had halved the amount of bosses it would have been ok, but they feel more like an obvious exercise rather than being integral.

One of the highlights of the game also takes place occasionally when Yoshi converts temporarily into a motorbike, an umbrella or a digger, which switches it up and has you rushing through platforming sections in a set time limit, grabbing collectibles on the way. These are a lot of fun, so much so that I wish that there had been more of them overall; these scenes are infrequent and often don’t last longer than a minute or so, which feels like a tease.

Yoshi’s Woolly World doesn’t necessarily reinvent the wheel, but the woolly aesthetic is clearly something that the developers enjoyed, as it is used to make one of the cutest games I’ve ever played, and also one of my favourite platformers from recent memory.