For those of you who like Japanese RPGs, like myself, then you will find this new game Lost Dimension by Lancarse absolutely ADDICTIVE. The story begins with an anime style opening, then quickly moving through an episode sequence giving us just enough information to move on with the story; the leaders of the world have gathered together to fight against a mysterious enemy appearing in a strange tower and declaring that he will destroy the world. Naturally this enemy’s name is simply, The End.

A special task force called S.E.A.L.E.D. is bought in to fight The End, containing a group of 11 individuals each with unique “Gifts” Think of these as special magical abilities that can be used during combat. You play as the main character Sho Kasugai, an 18 year old young man with an unusual ability of premonition. As they enter the strange tower to save the world, you discover that they have never met each other before and can’t remember how they got there, among other things.

Now, here’s the thing that really caught my attention about this game. It may seem like your standard tactical RPG game, fun and not too individual compared to others of the genre out there, but don’t be fooled. As you fight alongside your comrades towards the same goal, something becomes very apparent. You are all there to save the world…but there is a traitor among you! But who could it be!?

The traitor system this game has introduced is very unique and very cool. To advance anywhere in the game you must spend time getting to know your comrades, befriending them or making them you’re enemy, observing their behavior and their fighting to discover who this traitor is in order to move on to the next level.

The combat system is very easy to use, and familiar to those who play a lot of JRPGs. 6 members will accompany you on each mission, each able to move within a certain range and use one action from the battle menu each turn. It is all turn based with no real time action, so if you need to walk away for a minute or need time to think of a great strategy you have endless time to do so.

You have a choice of set Main missions and Side missions to complete for each tower level, each giving you a rank depending on how well you complete it. At the end of each mission you return to a central room where you are able to interact, level up, get new equipment and so on. 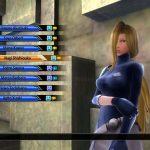 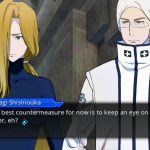 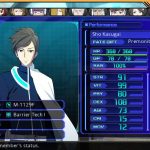 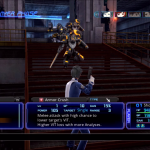 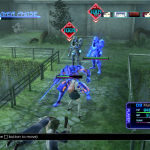 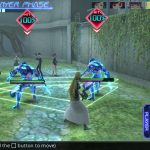 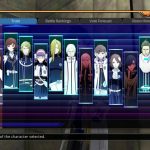 Aside from the technical stuff, the art style of the characters and the varied designs of each level are gorgeous. Added with the whimsical music a lot of us are used to and you really feel like you have been transported straight into an anime when playing. The depth of the characters personalities are amazing as well, some quirky and some downright nasty, but all unique. It does tend to follow some of the story line and character clichés we see in anime and JRPG alike, but rather than taking away from the game, it adds to the fun of it all. Something that really surprised me as well is that the characters have no censorship, and will gladly say whatever nasty word they please which, to be honest, made me enjoy the game even more!

You will find very quickly that you start to become attached to the characters, making it even harder when you find out that one of them is a traitor. You have to stay on your toes too as you advance, if you’ve ruled out someone as a traitor in a previous level, they could suddenly remember their goal in the next, so someone you’ve put your trust into could just as easily stab you in the back later. The great thing is, if you decide to replay the game from scratch, the traitors are randomized, so each time you play is different.

Lost Dimension is the kind of game you can speed through or take your time with, either way it is enjoyable and fun and is sure to give you many surprises. I absolutely adore this game and how it pulls at your heartstrings and makes you really think about things. All around this is a game I will definitely be playing again, and I can say with confidence that many of you will love it just as much as I do.