Like a young padawan learning the ways of the force, if there is one thing us Star Wars fans have had to come to terms with, it’s patience in the promise that ‘there is another’. Just like the hotly awaited episode 7 in theaters next month, a decade since the conclusion of the prequel trilogy; battlefront fans can finally rejoice in the release of Star Wars Battlefront from EA.

Well, rejoice may be a strong word. But after a decade of waiting through rumours and cancelled projects fans finally have a title for next gen consoles and PC. So is this ‘the title they are looking for?’

Star Wars Battlefront, developed DICE, a subsidiary of EA and famous for the Battlefield series of first person shooters, is billed as a reboot of the Battlefront franchise, and the first blaster-shot in the world of post-Lucas Arts game releases. A detail that you’ll find most fans have an opinion on.

Star Wars has, since a long ago, in a galaxy far far away, represented the eternal duality of good and bad, light and dark. And it seems that DICE have taken this ethos to a new level in their development, splitting fans to a degree not see since the ‘who shot first’ debate. And, perhaps inevitably when dealing with such an ardent fan base, what is absent soon becomes the focus over what is present. 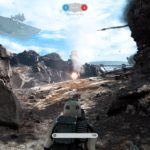 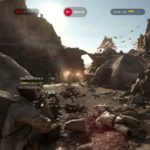 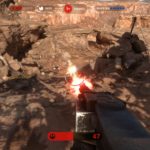 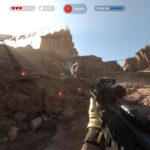 For those less familiar, Star Wars Battlefront is a first and third person skirmish shooter set in the backdrop of some of the most iconic battles of the Star Wars saga. Unlike the previous titles you will not find the 5-0-First of the clone army, nor droideka rolling out for the Trade Federation; as Battlefront initially focuses on the original trilogy content. Those hoping to take over the galaxy one star system at a time will also be disappointed to hear that battlefront is basically online only, doing away with the previous campaign mode and instead providing missions that can be played in 2 player offline split screen or online co-op. While these moves away from the previous instalments have some fans decrying ‘It’s a trap!’ and swearing off the title, there is something to be said for their focusing on what truly makes this series great; the online competition. And in this regard I find myself in a whole new experience.

While a long time fan of the Battlefront series, and indeed Star Wars games as a whole, I generally am not an online gamer; my previous battlefront experience being via 4 player split screen and single player. So my determination to see out this new iteration of Battlefront meant confronting my inner turmoil (which is what I call my internet connection) and finally taking the plunge online. An experience that was surprisingly positive. Presented with a range of 9 online game modes, including fan favourites ‘Heroes vs Villians’ and ‘Walker Assault’ as well as variations on your usual FPS deathmatch and capture the flag modes, I was able to quickly jump into a match and begin my assault.

Now some may say that I am ‘unskilled’ at the game, and indeed some in my position may even rage quit in the face of wave after wave of quick deaths. But I prefer to think of myself upholding the true storm trooper tradition. My gun fire rarely hit a target, and the bodies of my countless troops littered the battlefield, providing appropriate set dressing to the true heroes of the match.

In the notion of full exposure to the online gaming experience I quickly went to grab my headset, gearing up to be called a range of names not suitable for radio by competitive 12 year olds, before I quickly realizing that there is no public in game chat. While relieving to be protected from the inevitable abuse I would suffer as a ‘noob’, this did also deny any real ability to coordinate with fellow teammates, the absence of which is quickly felt when opposing a team of organised and experienced players. In the absence of particularly quality internet I am always fearful of the effect of lag on online game play, and while I’d love to believe this has some effect, in reality my experience was smooth and my tendency to be quick cannon fodder, of my own making. Indeed after 35+ matches, some of which hosting up to 40 players at a time, I did not experience a single drop out or play-breaking network disruption I have to credit EA on their server management.

Each of the game modes share a range of 4 to 9 maps, all of which iconic locations within the Star Wars Universe. While this provides nice variety and replayability at first this does begin to feel limited over time. Instead of previous dedicated space battles, in around half the game modes players have the option to take to the skies in iconic Star Wars vehicles, providing air support to ground troops, or in my case, fly around for a while before crashing into the battlefield. And this does help to extend the maps and game play experience.

But I can’t leave off without discussing the Bantha in the room. That is the Star Wars Battlefront Season Pass. As has been previously discussed on the show this collection of 4 DLC packs to be released over the next year comes at a steep price tag, the equivalent of purchasing an entirely new AAA title. And although some extras such as new maps and weapons have been announced as free to all players,  the current consensus is players wanting the full Battlefront experience will have no choice but to hand over their credits. Until actual details of what constitutes these DLC packs, and how much free content will be released to players is apparent, it’s hard to make a value judgement on the legitimacy of this.

Like all current online-only titles, the longevity of Battlefront will be contingent  on two main factors: the value-add of upcoming DLC, and the critical mass of players to keep matchmaking  readily available. With only a limited selection of single player modes available in-game, players may be tempted to move on to newer titles, rather than wait for a match to come available.