Capcom continue to give us nostalgia hit after nostalgia hit by releasing games from generations ago in an effort to give older versions of their most popular franchises a fresh coat of paint and hopefully find them a new audience. Resident Evil Zero is the next to get this treatment, after originally releasing on the Gamecube back in 2002. While some elements hold up alright, there are others that feel dated and serve more as a happy reminder of how far video games have come in the last 14 years.

The storyline was never the strongest even when Resident Evil Zero was first released, with some cheesy one-liners and relatively forgettable characters, and this remains to be the case here, apart from a memorable opening area taking place in the confines of a train. Using two characters with personalities of cardboard cut-outs, you have to switch between them to utilize their skills, manage your inventory and get them out of tricky zombie related situations.

What works well with this HD remake is the way it looks while you’re playing; the pre-rendered backgrounds still look fantastic with lots of detail and the visual upgrade is nice, although I could have done without the slow opening doors and slow ascending of staircases that used to operate as loading screens; nostalgic they may be, but nowadays they just break immersion. The cut scenes also haven’t been upgraded with the same tender loving care and often look a bit blurry which is a shame.

“…is meant to create tension but in today’s climate all it does is irritate.”

The controls have also been given a bit of an upgrade so that you can easily move back and forth between the two characters and it does make the game feel a lot less clunky than the original, although the static cameras do still sometimes obscure your view in a way that hinders progress rather than helps (even though it does still effectively add to the horror vibe when you can’t quite see what’s happening off-screen). 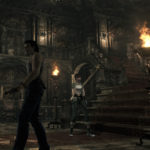 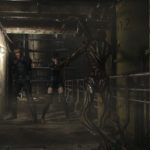 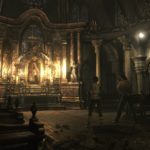 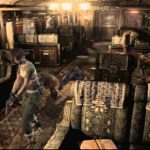 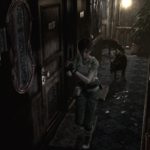 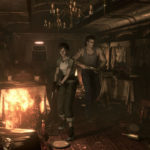 Inventory management is still a pain and at times you’ll spend a lot more time in that menu screen shuffling around objects than you will shooting zombies. It’s another one of those older ideas that is meant to create tension but in today’s climate all it does is irritate –  nobody wants to have to leave items on the floor and then backtrack to collect them later… can we just get on with the fun part of the game please?

While it is nice to go back and experience this game again as an adult, the impact is actually lost a little bit considering the HD remake of the original Resident Evil that released last year. The nostalgia and love I had for the original is almost unmatched and features memorable and exciting moments of exploring the mansion for the first time, the zombie dogs jumping through the windows and more. Resident Evil Zero doesn’t have that same vibe.

It definitely feels like Resident Evil, but I would much rather see a remastered HD version of Resident Evil 2 or, my absolute favourite, Resident Evil 3: Nemesis. The bonus unlock of being able to play as super villain Wesker when playing through a second time is a nice touch and a cute idea but ultimately a hollow edition.

Resident Evil Zero is a fine game; it just hasn’t aged that gracefully over the years. It really can’t match more recent efforts in the horror genre that has had a real boom lately. Still, if you’re craving something with an old school survival horror style and want to reminisce about the old days, it could be worth the value given it is bundled with the original in the Origins collection. But much like you would approach the groaning zombie sound behind the door you’re about to enter, I would recommend that you approach this very cautiously.