Far Cry has become one of my favourite warm fuzzy blankets over the last couple of years. That is to say, it’s comfortable, reliable and will always be there for me and provide exactly what I need and expect. This isn’t a bad thing necessarily, and with Far Cry Primal, the setting has very effectively shifted to 10,000BC, where the days can be wasted hunting and skinning beasts for food and shelter, gathering stone, wood and plants that can be used for creating weapons and healing and of course completing a variety of missions that are given out by multiple colourful characters. Yes, this is the standard Far Cry formula with a slight twist, and while the time period does provide a point of difference, the core game is ultimately one that is incredibly familiar.

Exploring the vast land of Oros with your bow and arrow, club and spear definitely feels more challenging than the open worlds seen in previous Far Cry games, mostly because you don’t have access to any guns. I’m guilty of being very trigger happy in the past, so capturing enemy strongholds without the aid of a rocket launcher or automatic rifle made me think things through a little bit more tactically. The world is also jam-packed with wildlife, and basically everything is a threat, with wolves, jaguars, bears and mammoths roaming around at every turn. Despite relying on the same mechanics as previous games in the franchise, Far Cry Primal’s primitive hook is an entertaining one.

So yes, you’ll be hunting animals to upgrade your gear, completing missions and discovering locations to earn skill points to enhance your abilities, clear out enemy bases to create fast travel locations and even go on some strange vision quests. There are a couple of twists to the tried and true formula; for example, the camera used to scout enemies is replaced by an owl, which you can also use to attack foes and drop bombs.

One of the larger and more fun additions is that early on you gain the ability to tame beasts, so that you can then have them travel with you, attack enemies and even in some cases be used as a mount. There’s something undeniably bad-ass about riding a sabre-tooth tiger into a camp of an unsuspecting tribes people to wreak utter havoc. You can even pet your beast, which doesn’t do anything really except look incredibly adorable, but I found myself as a dog-owner consistently wanting to pet them as if I was rewarding the great job they just did at tearing that guy’s throat to shreds. Aww who’s a good boy? 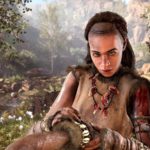 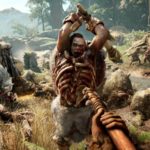 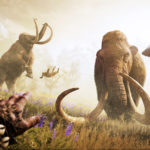 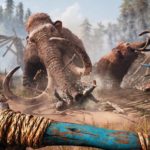 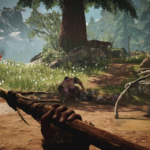 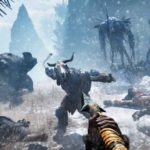 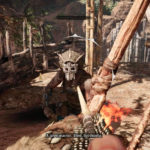 There is also a clear home base for you and the Wenja tribe, the group you are trying to rebuild and consistently recruit for by completing missions, freeing hostages and capturing enemy bases. It provides another avenue for collecting materials and upgrading your cave, but also works as a mission hub and a place for more stock of certain items to be delivered and refilled. The more tribe members you have, the better the rewards, and there is something very satisfying about upgrading everything in this area piece by piece until it is fully functioning not just mechanically, but visually as well.

While the world itself and the new additions to gameplay are great, the rest of Far Cry Primal quickly slips into that comfortable warm fuzzy blanket territory, and the story didn’t quite grab me in the same way previous games had. Each task usually had me hunting down a beast, killing a bunch of guys or using my hunter sense to track something down, and while some missions stood out such as climbing a large mountain to collect eagle feathers or following fireflies to track a rare elk, many of them are relatively forgettable. There is also no ‘big bad’ like Pagan Minh or Vaas to propel me along on this journey or motivate me to move from mission to mission, which left proceedings feeling a bit hollow.

Ultimately, if you’ve played Far Cry before, this is more of the same quality content in a different skin and style; whether you like that or not depends entirely on your love of the franchise. If you haven’t actually played one of these games before however, I can’t recommend Far Cry Primal enough. It makes the most of its prehistoric setting, has fun and genuinely enjoyable gameplay mechanics and a progression structure that is almost incomparable to other open world games in terms of how slick and addictive it is. While not a revolution by any stretch, it’s a solid experience start to finish and if nothing else, it’s an entertaining deviation to take part in.