Naruto SUNS 4 delivers everything you would expect from a modern fighting game: a heap of game modes, a huge roster of playable characters and an intense fighting experience. What will make or break this game for players is the extensive narrative of Story mode, which may not be to everyone’s taste.

But I haven't even finished my cup of tea!

Story mode works by providing you with a series of cinematic events and cutscenes, and then bringing you into battle at the appropriate moments where characters would fight in the narrative. I found this to be quite a nice touch, as it provides context that is often missing in fighting games, and gives purpose for the battle taking place. It does mean that it is a bit of a baptism of fire: because you’re thrown right in during the narrative, there’s not really any tutorial that explains how you actually play the game. All you get is a screen which explains the controls and then the next moment Uchiha Madara is bearing down on you.

After a few goes at struggling through, I did feel the need to go into Practice mode for a while just so I could get my head around the different battle mechanics. There’s actually a lot of simplicity to the battle system once you get the hang of it, even if the initial skill curve is a bit steep. The game also manages difficulty quite well. Rather than make you start again if you lose a battle, you have an option to revive with more defense or attack and keep on fighting where you left off. All this means is that you’ll get a C or a D rank instead of an S or an A at the end of the fight. This means there is plenty of room for players to challenge themselves to better their own ranking, while still making it possible for other players to keep chugging through the story even if they are struggling with the battles. 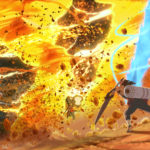 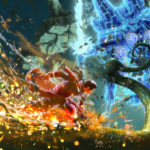 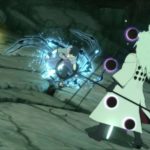 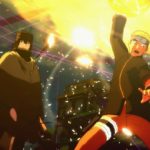 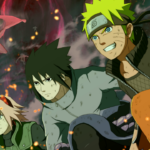 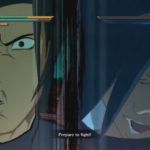 One thing about Naruto SUNS 4 that is particularly exciting is the way that you can take a whole team of people into battle. For example, your main character might be the first hokage, but you’ve also got the second and third hokage waiting in the wings. They can either be used to combo with your abilities, or you can tag them in and control a new character mid-fight. This can make for some really dynamic combat, and allows you to adapt to the changing strategies of your enemy. The scope of combinations you can make is massive too, with one of the biggest rosters I have seen in a fighting game.

“One thing that is particularly exciting is the way you can take a whole team of people into battle.”

The game is not without it’s shortcomings: towards the end of the game the loading times seemed to get longer and longer and I often felt during the bigger battles there was a degree of lag which seemed to come into play. Earlier on in the game instead of using anime clips you just get a montage of images which seems a bit cheap. Due to the translation from Japanese to English, even the proper cutscenes suffer from awkwardly bad lip syncing reminiscent of old kung fu movies.

All in all, if you’re into fighting games, Naruto SUNS 4 provides some really exciting combat possibilities with awesome team attacks and insanely over the top ninja techniques. However if you’re not into Naruto, or aren’t interested in the narrative-style Story mode, this game may not be the one for you.