While not as dark and gritty as your traditional multiplayer focused shooter, Plants vs. Zombies: Garden Warfare 2 knows exactly what makes those games tick, with a very successful variety of fun-to-use classes and detailed, vibrant maps and game modes. It may look cute and silly on the surface, but look a little bit deeper and you’ll find one of the more complex and engaging multiplayer shooters that I’ve come across.

The original Garden Warfare surprised everybody with its quirky characters translating perfectly to a third person shooter environment, and the sequel here expands on the idea very well. There is a story about Plants defending their gardens from the Zombies who are attacking for… some reason. It’s pretty thin but then the charm of the franchise has always been its art style and cheeky sense of humour, so I’m pretty forgiving when it comes to the game not featuring a meaty narrative. What it does offer at least is an offline single player mode that gives plenty of opportunity to test out the variety of character classes and many of the game modes as well.

The main game hub is known as the Backyard Battleground, and this is where Plants and Zombies each have their protected base with a sort of open battle zone in the middle. Here you can access the single player missions (which are essentially offline versions of the multiplayer game modes), the ability to swap characters and access stickers which can be earned to purchase upgrades or you can just wander into the open battle zone and practise killing your enemy. It’s a nice way of minimising the use of menus and keeps things moving along at a good pace. I have to commend the writing here as well, even though it does verge on ridiculous sometimes, that’s kind of the point, and I often smirked at the clever quips of the characters I was talking to.

“… it’s the classes that truly shine and make GW 2 a very unique experience.”

The multiplayer modes are reminiscent of what you would see in a game like Battlefield or Call of Duty, whether it’s an attack and defence match, a team deathmatch or even variations on capture the flag. While the modes will feel familiar straight away, it’s the classes that truly shine and make Garden Warfare 2 a very unique experience. On the Plant side of things you have a sniping Cactus, a Sunflower that shoots laser beams, a literal pea shooter and a Rose that uses flames and magic abilities. On the Zombie side there is a Pirate complete with parrot; a Zombie Superhero that fights with his flying fists and a Zombie Footballer who shoots footballs at a fast pace and also tackles fiercely. 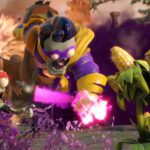 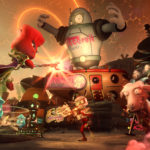 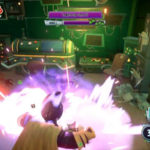 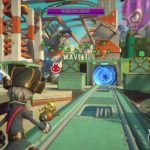 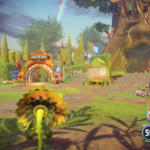 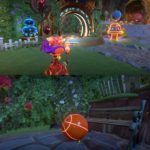 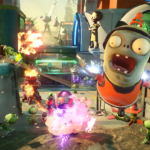 There is really just so much variety in how each class feels when you’re playing as them that it’s genuinely fun just trying each one out, even if you don’t master them quickly. Finding the right moment to trigger each of their special abilities while factoring cool-down timers can be the difference between victory and defeat, so you’ll need to be tactical and not just run in guns blazing. Being able to spawn little helpers to either guard an area, provide healing or create additional distractions when you’re attacking just adds to the chaos, but it never feels too overwhelming or unfair, even when you are losing terribly.

It does take quite a long time to level up each character, and while unlocking variants is definitely part of the entertainment, the fact that each variant then requires you to level them up from scratch means that completionists are going to be plugging away here for a very very long time. When you factor in that the game modes on display here aren’t necessarily a drastic change from the multiplayer experiences you will have had before, grinding could be short lived and repetitive for some players.

Within Plants vs. Zombies: Garden Warfare 2 lies a very valuable package, bursting at the seams with content to be discovered and unlocked along with a wide range of colourful characters and class types. In a sea of shooters that focus on realism and violence, Garden Warfare 2 is a bright and entertaining breath of fresh air, and while the single player campaign might be simple, I liked that the hub gave me the chance to familiarise myself with the many different classes before throwing me in the deep end of online multiplayer. If you’re looking for something competitive with a twist, this just might be the shooter for you.