The Legend of Legacy

Legend of Legacy is not for the faint hearted. It has all of the JRPG elements you would expect: parties of three, turn-based combat, cute avatars – it’s all there. But the combination of a lot of forced grinding, a fairly uninspiring combat system and a directionless storyline left me feeling lost and frustrated.

At the start I was really excited. After picking one of seven playable characters, you’re thrown into something of an adventure island situation. Each of the characters is put on the island for their own special purpose: I played as Garnet, the templar-style character, who is there on behalf of a religious institution to investigate talk of spiritual beings on the island. You’re given free reign of the island by the dubiously self-titled “Adventure King” who essentially acts as the quest giver in this game. From this point, you take your two other party members and head out into the unknown.

The first thing I noticed about the game was actually the quality of some of the basics. The music was great and not too annoying even after you’ve been in the one area for a while. The beautifully drawn backgrounds that really pop off the screen, that actually make you want to turn on the 3D for once. I also liked that the home town is set up as a hub for everything you need for your adventure: an inn to rest at, a merchant to trade with and new party members scattered around the town.

“…rewards endless grinding rather than strategy or variety.” 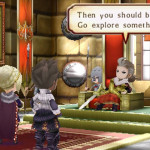 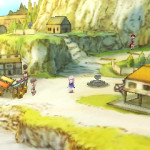 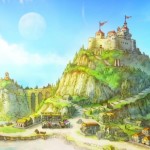 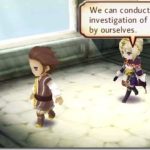 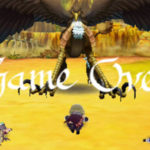 Random encounters were actual sprites on the map that you can sneak around or run away from, which was nicely reminiscent of the Tales series. This means that you can focus on exploring the maps rather than grinding it out against enemies all the time. Or so I thought. What I actually realised is that half the time you can’t see the enemies anyway because they’re obscured by obstacles on the map. Even when you can see them, you’re so busy running away from them that you end up running into map hazards which do a variety of horrible things to your party, such as reducing your HP permanently or causing an encounter so difficult that 99% of the time it leads to a game over.

Adding to these difficulties was the frankly brutal combat system, which was very poorly explained, and rewards endless grinding rather than strategy or variety. I’ll give you a quick rundown of things that will lead to your immediate death: Changing a party member because they will be horribly under-leveled; Changing weapon type because you will lose all of your skills; Not setting the correct battle formation which by the way, is never explained at any point. This doesn’t even take into account the extremely convoluted elemental system, where you and your enemy have what is essentially a tug-of-war in the midst of battle, with the goal of appeasing nearby cosmic dust to fight on your side of the battlefield. If you do pick up this game, I urge you to choose your final party and weapon combinations as early as possible and save after every combat because you will be punished if you don’t.

If you heard my Dark Souls II review, you’ll know that I like difficult games. There has to be the reward to match though. The storyline in this game was something of an afterthought, never goes into much depth, and is just vague overall. If I’m going to go through all of that grinding and running around lost, I at least want to be invested in the outcome and I just wasn’t.

The Legend of Legacy

It is very possible that hardcore JRPGers out there will love this game, as I did at certain moments. It’s open-ended, gives you a lot of room to customise, and is above all, challenging. For me though, I can’t help but think that game developer Furyu’s tagline, “Precious days, always” is less a slogan than a warning when it comes to Legend of Legacy. All I can say is that I’m not wasting any more precious days on this one.