The Witness has engaged me in a way that I haven’t experienced in a long time. I should have expected nothing less from the very anticipated puzzle game from the creator of the much loved Braid, but the overall style and intrigue from the moment you first load up the game and encounter your first challenge gripped me instantly and didn’t let me go. Exploring the beautiful and strange island and testing my wit felt like learning another language so that I too was able to communicate in this world, and as I tackled each new area and style of puzzle, the feeling of being out of my depth was eventually replaced with one of pure glee and accomplishment. It’s a feeling that video games don’t often achieve, and the fact that it happens so often here is a testament to its incredibly smart game design.

Essentially, The Witness is a number of labyrinth-like puzzles that must be completed by moving a line from the indicated starting point on a panel to reach the exit point. It sounds simple, and perhaps it is in the beginning, but then more elements are introduced to change the way you must complete each consecutive panel. Ensuring you hit certain points without crossing over the same path, separating black and white dots and figuring out what each pattern means is part of the fun, and each area of the colourful and beautiful island has a different theme and a different language that must be learned to be able to complete it. Completing a puzzle panel leads to another one via a circuit that must be followed, or it may unlock a door or activate a lift; with no verbal or written instructions, learning is entirely visual and will cause you to think differently when trying to apply logic to something that initially seems illogical.

The motivation behind completing each section is simple but intriguing; once you’ve solved an area, a beam of light shoots from where you are towards the top of a mountain. As you progress, more and more beams shoot towards the ominous endpoint and raise questions about “what happened on the island?” and “what does it all mean?” Piecing it together certainly is intriguing and provides a sort of finish line for those who need it, but honestly my time spent exploring was enjoyable enough in the first place. There is a certain rhythm to completing area after area, and because everything is accessible from the start, you’re free to tackle things in any order you wish, but there are puzzles you’ll encounter as you explore that you quite literally won’t understand.

This is where The Witness shows its intelligence rather than being outright frustrating; if you don’t know how to solve a certain puzzle, you’re not meant to know how to solve it yet. My one spoiler-free tip for playing this game is this: When you’re trying to figure something out that you’re clearly not supposed to understand yet, you will never be able to just figure it out with pure guesswork. Go for a walk through the game world and find something else to do instead. 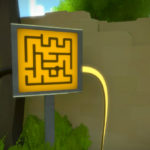 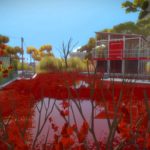 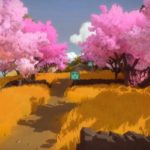 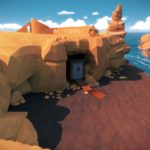 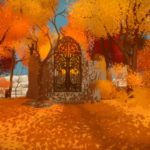 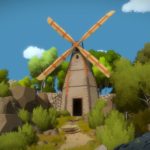 This suggestion is made even easier to digest when the island itself is so beautifully crafted, with bright colours and varied locations, like the gorgeous pink cherry blossoms, the vibrant green bamboo forest and the vast golden desert with the sun beaming down brightly. The visuals help to define puzzle areas but are more than just that; they are wonderfully crafted and genuinely pretty, and they are further enhanced by the multiple different perspectives you get to enjoy them from when viewing from certain angles and higher vantage points.

Some may look at a game like The Witness and call it pretentious or weird for the sake of weird, but I was so captivated by everything I was doing that none of those negative thoughts really crossed my mind throughout my play through. There’s also quite a lot of content here if you’re willing to take the time; I’d estimate a solid 20-30 hours just to finish the main areas on the island, but there are other secrets to discover and optional puzzles to complete as well which further enhances what is already a deeply complex and thoughtful experience.

When you encounter puzzles late in the game that take advantage of several different rules that you’ve learned and wants you to apply them all as a combination, it is super satisfying to complete these puzzles and reflect on the beginning where you were merely drawing a straight line from one end of a maze to another. Look at how far you’ve come and look at what you’ve achieved.

This game came in hotly anticipated by many, but even though I was looking forward to its eventual release, I didn’t expect it to captivate me as much as it has. Walking through the real world feels dull for me at the moment, lacking the gorgeous colour palette and engrossing conundrums that propel The Witness to the forefront of my thoughts on a constant basis. After all of the hours I’ve invested, I still want to go back and discover more. The elegance of its overall presentation from the bright visuals to the minimalistic audio is just so delicately crafted; this could have just been a game about exploring a mysterious island and it could have just been a game about solving intense, smart and mind-bending puzzles. Luckily for all of us, it’s both of those things, and is an easy recommendation as the first truly must-have game of 2016.