The best thing about Unravel is how consistently it made me smile. With an iconic new cute character to love in Yarny, moving from memory to memory and navigating varying levels of gorgeous elements of nature is something I won’t soon forget.  While the story might not present as deep as it wants to and certain platforming elements aren’t as precise as they could be, this doesn’t take away from the fact that Coldwood Interactive have crafted one of the more personal and pure adventures I’ve played in a long time.

The premise of the game has Yarny navigating through different beautiful locations in Sweden, reconnecting the memories of a long lost family, and the little character represents the bond that ties everything together. You’ll solve puzzles and try to avoid the dangers that wildlife can present for a character that is so small; crows threaten to grab you and fly you off screen, crabs can make short work of you and other nasties await you that normally you wouldn’t even blink at. Unravel plays with perspective in this way very well; it’s not the first time we’ve seen a small character navigating the real world but never has it been so gorgeous.

The depth of field particularly is stand out, with incredible care that has been taken to not only the objects in the foreground but the distant background as well. While depth isn’t used in a puzzle perspective, the art direction here is standout and does wonders in setting the tone for a world that is at times glorious with natural life but other times gloomy with manmade metals, mechanical equipment and darkness. The stark contrast between the light and dark is intentional and a decent gut-punch to see how humans can impact and disrupt the natural world. I realize this is not a new message by any stretch, but I really felt it resonated here in this particular context.

“…capable of both breaking and mending your heart…”

The animations for Yarny are also particularly effective and add even more depth to what is already a beautiful looking game. The cute little thing reacts to the world around it in a way that feels natural and logical. When it’s cold and raining, Yarny shivers and lowers its head as the water hits, a butterfly temporarily startles Yarny as it flies off of a flower nearby and when landing after being flung, it takes a second to compose itself before moving on. It’s quite amazing how a character that is essentially a piece of wool with eyes can convey more emotion and feeling than many of the human characters I’ve encountered in gaming, and it helps create a connection that had me gasping when at risk of dying and grinning gleefully when the emotion conveyed was one of relief or happiness. 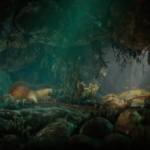 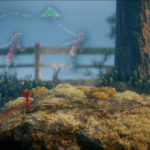 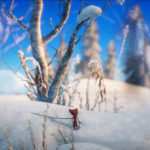 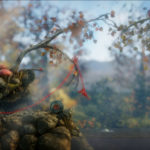 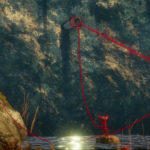 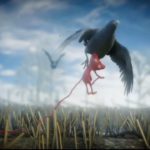 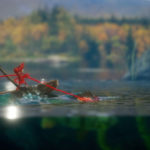 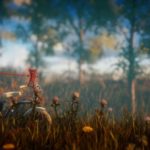 The soundtrack here is also worth a mention as it helps to elevate Unravel to another level entirely, matching the different tones of the game world and evoking feelings of joy and adventure. The creator of Unravel said that the music needed to be capable of both breaking and mending your heart, all without spoken words, and in my opinion it absolutely accomplishes this. When it comes to production values, this is a great example of what elements can come together to make a game shine, even if the scope of the gameplay is not as lofty.

What you’ll actually play is a fairly basic platformer with yarn as the main gimmick; you can use it to lasso and hook on to objects, swing from platform to platform, create bridges and trampolines by tying it to two different points and make sure that you don’t overuse the yarn that you have, because Yarny will eventually run out and you won’t be able to progress any further until you find some more. The puzzles generally involve using these skills to your advantage to make it to the end of each level, and I did come across a few moments of true frustration where I got stuck on a section and couldn’t quite progress through no fault of my own.

The beauty of the game world and the overall style here definitely makes me want to forgive any issues, but the jumping can feel floaty and sometimes it’s a little unclear how exactly you’re meant to progress. In tighter puzzle-platform experiences, figuring out how to get through can be a real moment of personal pride, but here it just felt like a relief. Many of the puzzles do boil down to making sure there is an object you can use to climb on top of to reach a higher ledge, so there isn’t exactly a lot of variety on display here either.

The team behind Unravel really wanted to tell a touching story, and they have done exactly that. To quote the game itself: “Love forms bonds, like strands of yarn. Like yarn, those bonds can be fragile, or get all tangled. But when they’re kept and cared for, they can bridge any distance.” It’s a simple game that is enhanced incredibly by breathtaking visuals, a memorable soundtrack and overall smart production design. While there are certainly parts of the gameplay that could have been tighter, I will reflect on my time with Unravel quite fondly, as it sets an example of how to create a truly touching and intimate experience that will stay with me for a while.