Last year I developed a pretty large girl crush on the former UFC Bantamweight Champion, Ronda Rousey. She had come into the spotlight in a large way, featuring at events like WWE’s Wrestlemania and even some movies like Furious 7, but not taking away from the fact that she was completely dominant as a fighter, with many people at the time calling her the best female fighter in history.

She could knock you out in seconds or lock you into her trademark arm bar that would often have people tapping out instantly; it was quite the sight to see, and Rousey along with other fighters like Conor McGregor have really helped to bring Ultimate Fighting Championship into the forefronts of the press and pop culture. EA Sports UFC 2 has the tough task of representing a sport that can be quite technical, but can also have bouts that are wrapped up in seconds due to a well-placed punch to the head. And, for the most part, it does a pretty good job.

My first few fights in UFC 2 were a little embarrassing. Without quite understanding how to block and counter, manage my stamina and be effective with ground moves and submission holds, I found myself losing and losing quickly. Once I’d wrapped my head around a few of the concepts however and spent some time in training so that I could learn the basics, I started to become more and more competitive.

“…the presentation is about as legit as it gets.”

The game darts back and forth between a fast-paced standing game where it’s all about blocking high and low, and landing big punches and kicks on your opponent in an attempt to weaken them and potentially knock them out. This is balanced by a much slower ground game, where you must jostle for position on the mat by using the right stick to try to gain advantage and potentially lock in a submission hold. They are different beasts altogether, but I found the ground game quite simply takes too long to be effective. 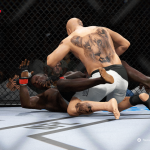 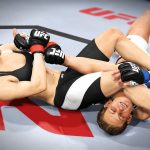 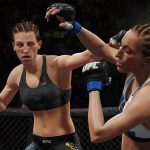 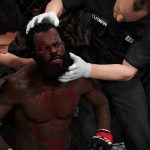 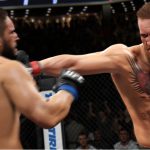 Slowly moving from hold to hold can take a lot of time, and I often just tried to get into an upwards position so that I could use a ground pound, punching downward and going for the knockout that way. Submission holds trigger a mini-game of sorts that requires you to move the right stick whether you’re attacking or defending. It actually takes a while to make your opponent tap, and while this might balance the ground game in a way, it also takes away from some of the spontaneous fun that the real life UFC often provides.

What makes UFC so intense to watch in real life is that anything can happen and it can happen quickly. Fighters have a range of different tactics and submission holds get locked in and matches finish almost out of nowhere on occasions. If a good punch or kick lands, it’s over. Playing EA Sports UFC 2, fighters can sometimes take a few vicious hits direct to the head and still keep fighting. It might make for a more fun game experience but it also detracts from the realism so it feels a bit odd sometimes to land an awesome uppercut but not get the payoff of the TKO.

In terms of realism though, I have to mention that the game looks stunningly good. There is so much detail on each fighter, with every scar, tattoo and imperfection on show. Skin actually ripples and reacts realistically when taking punches and the presentation is about as legit as it gets, with commentary and visual effects that make you feel like you’re really watching a UFC fight, which is exciting. There is also a range of game modes including career, Ultimate Team and an online mode that works well. There’s most of the content you would expect from a sports game in the EA stable so there are no surprises here.

EA Sports UFC 2 comes close to achieving the thrill and excitement of real life MMA fighting, with a few areas for improvement. The presentation is there, the intensity of the bouts is there, and I often found myself on the edge of my seat when matches reached their climax. There is still the challenge to properly balance the difference between realism and video game tropes, but with a fighting engine as solid as this, it’s easy to recommend as the best UFC video game to date.