Pokémon Super Mystery Dungeon is a 3D dungeon crawler in which players assume the role of a human that wakes up having been transformed into a Pokémon in a world filled entirely with other Pokémon , all 720 Pokémon which are currently released in fact.

When you first load up the game you are asked a series of questions which then match you with one of the 20 Pokémon available to control, which are the 18 starting Pokémon from all six main titles along with Pikachu and Riolu. This also then selects your travel companion, your best friend in the game who comes along with you on your adventures. My answers had me play as a Riolu, with a Fennekin as my best friend and sidekick.

Pokémon Super Mystery Dungeon does takes a while to warm up, taking you through different days at school, and rather long cut scenes, whilst you learn the basics of dungeon adventuring before you’re ready to adventure out by yourself through procedurally-generated dungeons filled with enemies, items and traps. As you play through the story your mission is to help stop a major crisis and save the Pokémon world.

“…it’s easy to start feeling the repetition of the mystery dungeon formula.”

I hadn’t played a mystery dungeon title before this review and it’s a lot different to your typical Pokémon journey that you would probably be familiar with. Taking the role of a Pokémon is cute, and you have the usual 4 piece moveset which you use to battle your way through. Movement in dungeons is across a grid with enemy Pokémon getting one move for every step you take, or every move you use. 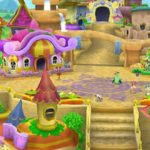 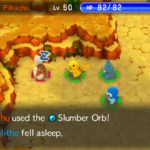 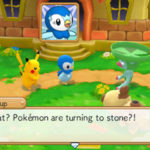 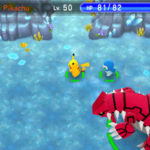 Everything opens up the more you play through the game, especially once you can finally leave your starter town and choose from a wider roster of Pokémon on non-storyline missions, but by the time you reach this point it’s easy to start feeling the repetition of the mystery dungeon formula. This is a game that is good to play in small doses, I played mostly on the train for my ride to and from work and it’s enough time to smash out at least one mission or dungeon.

While story dungeons will force the player to use specific teams of Pokémon, normal dungeons will allow you to choose any three Pokémon you wish. More Pokémon can be recruited by completing expeditions or simply chatting with them around town. All 720 Pokémon are available to be recruited, including legendaries, gender variations, all forms of Unown, and more. Using Pokémon in dungeons will allow them to level up and and learn new moves.

One major flaw in the game that reared it’s head fairly quickly for me are the presence of difficulty spikes that completely disrupt the momentum of the gameplay and this quickly become incredibly frustrating. After completing a number of missions for Pokémon and steadily making progress, you’ll suddenly hit a brick wall when you’re forced to defeat a boss Pokémon that is several dozen levels above the team and your team get one hit KO’d over and over again. Being steamrolled by an extremely overpowered boss is not fun at all.

If you fail a dungeon, you will lose all the items and money currently being held, unless you opt to wait for a rescue mission. These can be arranged on Pelipper Island, where you can request help from other players via passwords, QR codes, local wireless, IR connection or even send your own rescue team along, traversing your way through the dungeon to the point you failed at initially to save your original team. Alternatively, you can just return to your old save but this loses any progress you’ve made or items you’ve obtained.

If you’ve never played a super mystery dungeon title before, but are a fan of the Pokémon series then it’s definitely worth a shot, just make sure you have some time and patience up your sleeve to get yourself through to the more fun, non-story missions and collecting those 720 Pokémon !