It’s incredibly difficult to sum up a game like The Division in such a short timeframe, so what I’ll open with is that I’ve spent literally more than 40 hours in a desolate New York City that has been hit with a virus, leaving the world fragmented with dangerous factions and a whole lot of chaos that needs to be kept in order by you, one of the Division agents tasked to try and keep civilians safe and restore order to a fallen society. The incredible detail in the game world is heightened by some surprisingly deep RPG elements that cap off what is one of the more tactically sound third person shooters available, which brings it all together in one sweet package that you just need to play.

Taking a cover based tactical third person shooter and throwing it online with MMO elements isn’t an entirely new concept, but it hasn’t been done with such finesse before. The open world is trademark Ubisoft, with plenty of things to do, including main missions, side missions, encounters, collectibles and more. Every corner you turn there is something that can be done to earn XP, and in higher level zones of the map there are plenty of enemies from the main opposing factions that need to be dealt with.

Shooting in The Division feels tight and moving from cover to cover feels intuitive, with your character ducking and weaving to move from spot to spot to get better vantage points on your foes. The enemy AI isn’t perfect, at times changing position themselves, ducking behind obstacles and attempting to flank you, but other times taking ridiculously large amounts of damage before even bothering to notice and move out of the way. There is such a large number of enemies in each section that it almost isn’t noticeable when the AI isn’t reactive to the situation, and the world is built so well that I didn’t really mind when this occurred.

The city is empty apart from the few civilians who have survived the virus roaming the streets, along with enemies doing the rounds. Cars are abandoned in the street, rubbish strewn about, and the virus hit during Christmas which means decorations still hang off of lamp posts and trees in a melancholic fashion. There are apartments that have been left by their occupants, with pictures on the mantle, TV left flickering and bottles of soda left in the fridge. While there might not be many people visible in the game world, it genuinely feels like a world that has been lived in before, which is harrowing.

Story takes a bit of a back seat once you get through the opening hours, but for those wanting more depth to their narrative, I personally recommend the Missing Person side missions. You’ll track Echo’s through the city, which are visual recreations of the past in the form of a static image along with the audio from the situation in question. These fragments allow you to take part in a sort of memory, and combined with various phone recordings and footage that is scattered around; you can piece together different small stories that form a bigger picture of a place that was truly living and breathing before, but is now bleak and lifeless.

Cleverly, your base in The Division needs to be upgraded by collecting materials from missions, which changes the Medical, Technical and Security landscape of your entire operation. It’s really cool to see every element actually functioning as you upgrade, and it can give you some genuine abilities, perks and even restock your supplies as you play, so it becomes important to decide which area of your base you are going to focus your resources on as you progress.

“…undeniably addictive and kept me on the edge of my seat” 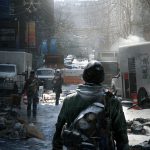 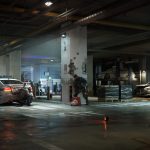 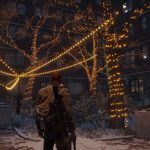 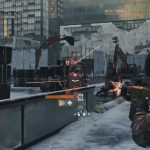 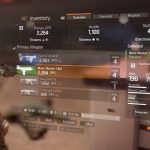 Let’s also not forget the RPG elements of this third-person shooter; playing with friends or finding others to play with enhances proceedings dramatically, and ups the fun-factor in a very serious way when compared with the “sometimes a little bit lonely” feeling when playing on your own. Completing missions, sharing tactics and collecting loot that could potentially give your weapons and health a gigantic upgrade is undeniably addictive and kept me on the edge of my seat with every potential big score that we found, and it’s something that still keeps me playing even after all the time I’ve already spent in Manhattan so far.

Where The Division truly opens up is during End Game, where not only are there tough daily challenges, but also a dread-filled scary-but-cool place called The Dark Zone. While available very early on, it definitely has been designed with the level cap in mind, and has created for me some of the most intense and stressful moments I’ve encountered in an online game, ever. See, in The Dark Zone, enemies are high-powered and extremely challenging to take down. Other human players also roam around freely, and they can go rogue and turn on you in an instant if they want to steal from you.

The loot in the Dark Zone is almost always better than the loot you’ll find in the main game as well, and can only be used if you spend 90 seconds calling in a chopper for extraction. Distressingly, calling an extraction alerts all other players that you are trying to keep something good, which almost always leads to an intense stand-off at the extraction point. Are they going to kill me and take my stuff? Are they going to fight with me against the AI? Are they just here to extract something of their own? If you want to get your heart racing and your adrenaline pumping, this is the best way to do it, and it’s freakin’ awesome.

With a super smart game design and seemingly endless amounts of upgrades and loot to discover even after the main campaign is completed, the possibilities for The Division are endless. With more content promised in coming months, it will just add even more to an already polished shooter that’s bursting at the seams with missions and increasingly difficult team-based gameplay. The stark contrast between the tight formulas of the coop campaign and the confused pandemonium of The Dark Zone is harmonious, offering something for everybody and pulling together a clear Game of the Year contender for 2016.