If you’d have said to me last month “Hey Luke, do you want to spend the majority of your time for the next two weeks dying over and over and over again and losing your progress?”, I probably would have smiled and nodded, knowing full well that Dark Souls 3 was soon to be released. I’ve died thousands of times in all of the Souls games before and even loved dying in Bloodborne as well, so I felt adequately prepared for this title and ready to explore the dark, ash-covered setting of Lothric with a grin on my face.

For those who don’t know already, the main appeal of these games is the difficulty. Not just that it’s hard or non-linear, but that you must take your time and learn the specific patterns of each enemy you face if you’re going to stand a chance at making any progress at all. Death is not something that you can avoid; you must learn from your mistakes and then dust yourself off and try again. This is not recommended for an impatient gamer, but if you are willing to take the time and take on board the constant feedback that the game is giving you about how you are playing, you will find one of the most intense and rewarding experiences available.

I have a confession to make: I have never finished one of these games before. Despite putting hundreds of hours into this franchise, I have come close to the promise land but never seen those beautiful closing credits, usually giving up at some point in frustration. The Souls games I’m used to have a much slower pace than Dark Souls 3, which has evolved since its creator Hidetaka Miyazaki took a sidestep to work on Bloodborne, which focused more on quick combat, countering and taking advantage of vulnerable opponents. It’s not quite as fast here and the game still very much feels like a Souls game, but it’s definitely an improvement from a combat system that felt sluggish at times in the past.

This is enhanced by the weapon arts available, where there is dual wielding and different combos available based on the weapons you choose to use. While previously I’d find myself focusing entirely on one main weapon and ensuring I was confident with it, Dark Souls 3 inspired me often to switch things up, try different alternatives and keep multiple weapons at once so that I could adapt to different enemy types. You won’t have to play this like you’ve played the previous Souls titles, which switches things up and allows for a bit of creativity in combat. There’s something about the flow and style when using weapon arts that makes them feel beautiful in a setting that is anything but.

Well, actually, Lothric is absolutely gorgeous, in a dark and dreary kind of way. The architecture on display is at times breathtaking and awe-inspiring, and it’s quite captivating to stare across in the far distance and still see a dragon atop a castle that you’d walked past literally hours earlier. With so much of the world on display dilapidated and crumbling, there is a profound sadness to each environment that is glorious and wonderful – and this is before we talk about the design of the enemies. 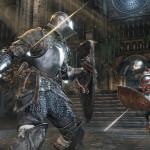 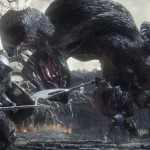 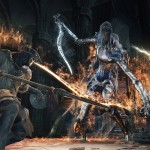 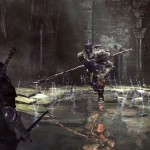 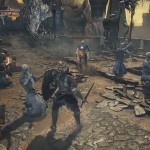 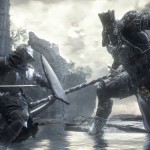 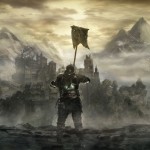 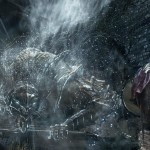 Oh man, the way they have crafted these disgusting, scary, crazy demons is something to behold. There is such a variety in the types of monsters that you’ll be fighting, from stealthy creepers to huge evil crabs and from gigantic demonic witches with long black robes to ghost like dog… demon… things… I won’t spoil the bosses for you, but Dark Souls 3 features some of the most intimidating and downright nasty creatures I’ve ever seen in a video game, straight out of your nightmares and onto the screen. It really is impressive.

“…straight out of your nightmares and onto the screen.”

Being killed so often and having to reassess not just the way you fight but the path that you take provides good opportunity to appreciate all of the little details that Dark Souls 3 has to offer. Talking to others who have played the game, it’s amazing the amount of differences you come across. Entire boss battles and completely unique areas can be missed if you don’t make an effort to truly embrace your surroundings, and some of my most enjoyable moments in my play-through came from the times I strayed off the beaten path, making each discovery feel personal and earned.

There’s something about the Dark Souls branding that is off-putting to a lot of people who don’t want to put lots of hours into something without seeing that clear pay-off in the form of progression, and if you’re new to this franchise there are a lot of concepts that go unexplained that would make things difficult to enjoy in the early going. I know that inherently it’s supposed to be ridiculously challenging, but that’s still not for everybody. There were also some pretty alarming drops in frame rate at times, usually with multiple enemies on screen in more open environments. It didn’t happen often, but it did detract from what is otherwise a pretty flawless visual experience in every other aspect.

I was prepared for a game that was going to kick my arse and make no apologies about it, but what I found was a faster Dark Souls experience that demands to be played more than the previous titles in the franchise. As soon as you begin, the dark atmosphere sets a tone for the duration of Dark Souls 3 that can’t be shaken off. The story is intentionally vague and the rules of play won’t be clear to newcomers, but the overall feeling I got even after what must have been my 167th death is that this is actually the most accessible Souls game to date. If this is indeed the final game in the Dark Souls franchise, this is a fantastic swansong and an incredibly rewarding action-RPG. Play it… if you’re feeling brave.