When Hyrule Warriors was first announced for the Wii U I, being the massive Zelda nerd I am, was extremely excited. I’d played many Dynasty Warriors games as a kid and was looking forward to seeing how these two would combine. Let me tell you, I was not disappointed and spent many hours smashing through hordes of enemies as my favourite characters from Hyrule.

Nintendo’s Digital Event at E3 in 2015 set my heart racing again as Hyrule Warriors Legends was announced as a 3DS title. Hyrule warriors really suits the pick up and play style of gaming as battles can last anywhere from 10 – 25 minutes, giving you just enough time to sneak one or two in on a train ride or over your lunch break, without feeling too laboured by the game.

The Wii U to 3DS port includes all previously released DLC along with some new features including the new ability to switch characters on the fly during the heat of battle which I absolutely love, and adds two new story chapters: one based around the girl in the green tunic, Linkle, and one featuring characters and environments from The Legend of Zelda: The Wind Waker that serves as an epilogue.

“…a much more streamlined gameplay experience.”

Tetra, King Daphnes and Toon Link, all from The Wind Waker, along with Skull Kid from Majora’s Mask and Linkle, appear as new playable characters with more on the way. The game’s Adventure Mode features a new “My Fairy” system, which is an extra companion that helps with magical attacks and an additional map inspired by The Wind Waker, as well as more costumes and a new Trident weapon for Ganondorf. 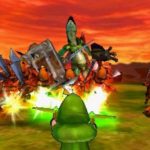 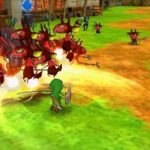 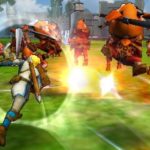 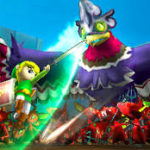 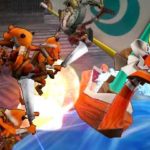 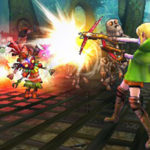 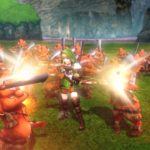 The gameplay in Hyrule Warriors Legends is nothing like a Zelda title and a lot more like a Dynasty Warriors game, meaning a non-stop barrage of moves and crazy combos, with hordes of enemies from the Zelda universe attacking you at all times. As your battle progresses so do your objectives and usually capturing enemy bases by wiping out hordes of enemies is essential. Here is where that brilliant new feature of switching characters mid battle via a simple tap on the touchscreen really comes in handy, allowing you to play as one of the other characters available to you on the battlefield in that mission.

This eliminates the need for a mad dash to the other side of the map to protect a base, as often you can switch to your ally who may be closer than your current character making for a much more streamlined gameplay experience and reducing the annoyance of not being able to reach a certain spot in-time. There are also new Owl statues that you can use to teleport to different spots on the map by using the Ocarina.

The soundtrack and voice acting are just as good as they were on the Wii U version and whilst the graphics are slightly limited due to the smaller screens and processing power of the handhelds, it gives the game a much more cartoon feel which I enjoyed, particularly on the new Windwaker inspired levels.

These improvements, along with all new maps, characters and storylines means that even those that sunk a number hours into the original Wii U will be drawn back in to the massive adventure once again.