Rainbow Moon is a truly Traditional turn based tactical RPG, which will turn most people away, but for those of you who love a good RPG where you can battle away for 100+ hours, rainbow moon might just be for you!

The story starts with the protagonist Baldren, wandering through the dangerous forest of Ellje woods, in search of his rival Namoris for their annual duel. Bladren is then caught off guard as he comes across one of the many dangerous portals filling the woods, and Namoris, lying in wait, takes the opportunity to attack him from behind, throwing him into the portal. He wakes to find himself on the mysterious Rainbow Moon, finding the once peaceful moon infested with monsters that followed him through the portal.

That, as they say, is all she wrote. In this game, story line takes a back seat position in favor for gameplay. Which honestly, is not always a bad thing, but personally for me, having an engaging and progressive story line is what I look for in a good RPG, or at least a story that progresses somewhat sporadically, but that is something you will not find in Rainbow moon.

In saying that, it is not a boring game, there is plenty to do and hours and hours of content, but battles can be quite repetitive after some time, any that is what you will be doing a lot of, along with a lot of fetch quests. It also drags it’s feet in a sense, you will find not everything is thrown at you at once, for example it will take a few hours until you gain your first party member, and tactical moves and tutorials will show up further into the game than most are used to.

That is one thing that I have respect for in this game. It doesn’t baby you in the slightest, it states simply “This is the kind of game we are, we will give you what you need, when you need it, but the rest is up to you”. In saying that, it is not harsh to the beginners out there just starting to dip their toes into traditional styled RPG’s, but it does expect you to use your common sense and try to come to terms with some things yourself.

On the title screen when starting a new game, you are given some options which I really liked to see. When selecting difficulties, you can also choose what kind of aid you will have in terms of items. You can choose from a fully stocked starter kit, for those adventurers with a more careful attitude, all the way to starting with nothing but the clothes on your back, for the more daring and accustomed players out there.

In my opinion, it happens to be a customizers dream, there is a lot you can do you upgrade and improve equipment, armour and items, and the game also adds in a hunger bar to accompany day and night cycles. Though I can see that having those two features brings a sense of real time adventuring, I found having to keep my hunger bar up was a tedious task, and the food I had to carry around to do so was a needless waste of space. In saying that though, it is a cool concept, it just did not work for me personally. The day and night cycles were a nice touch though 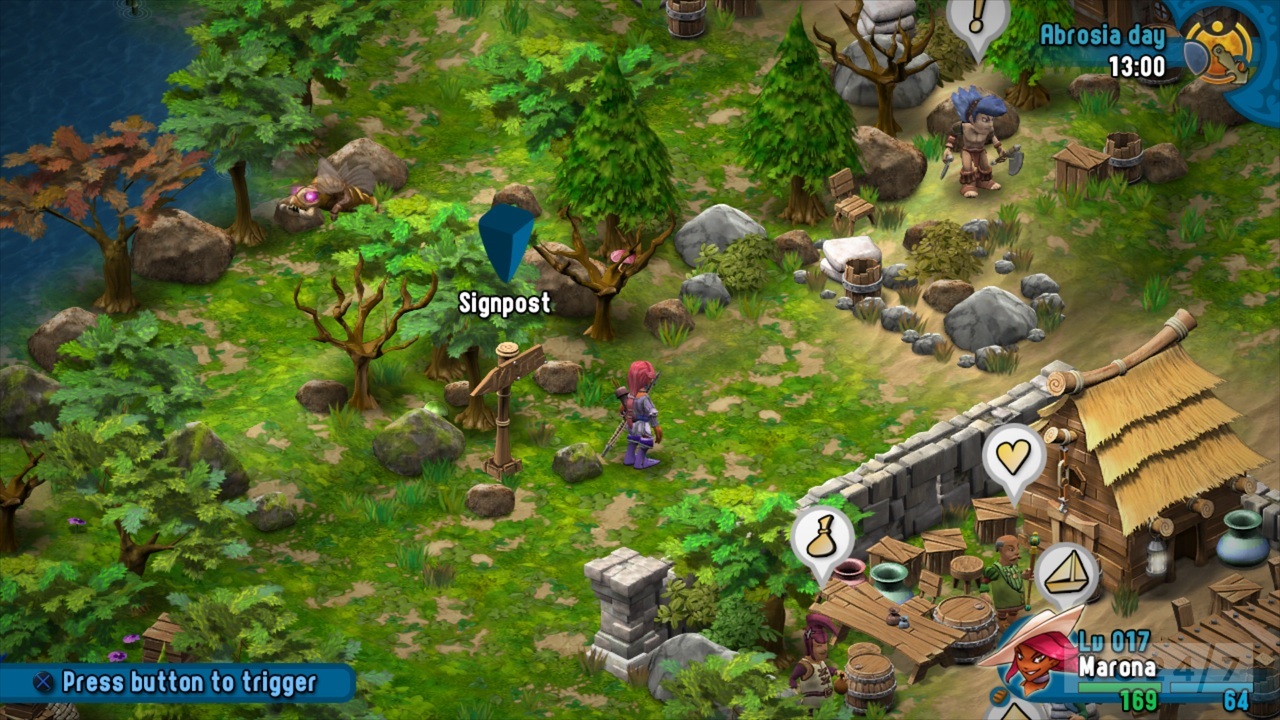 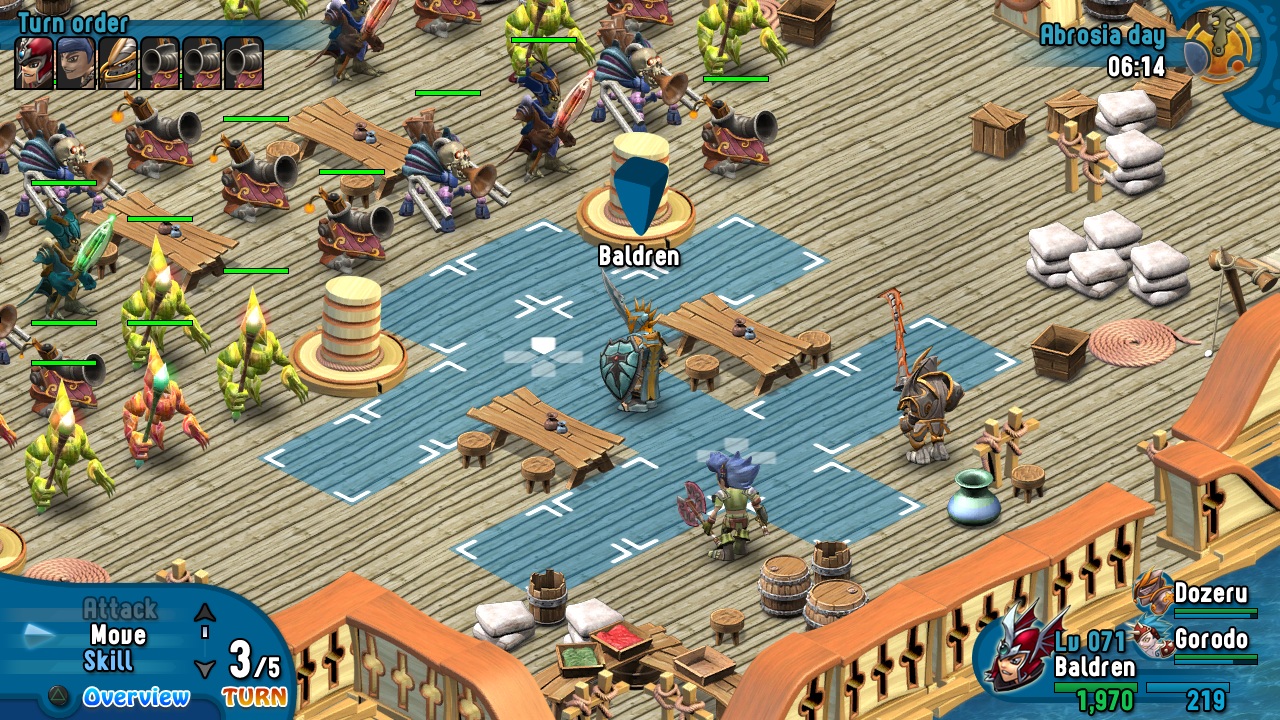 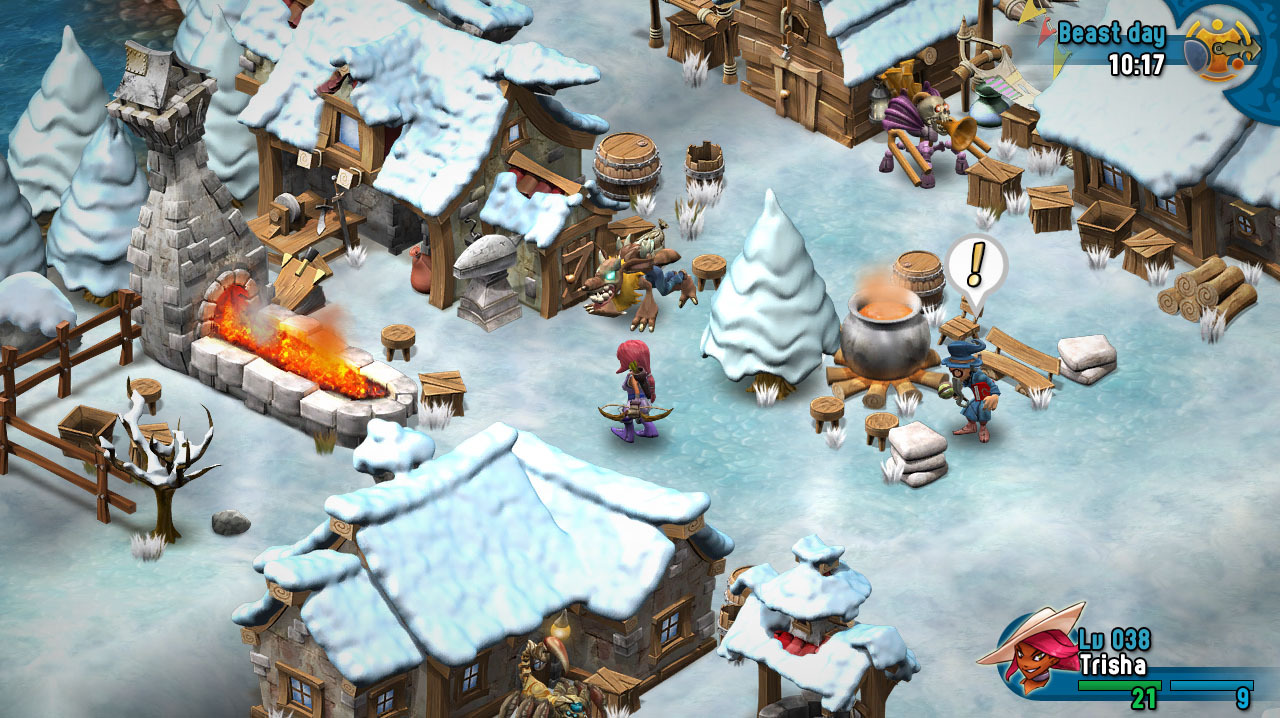 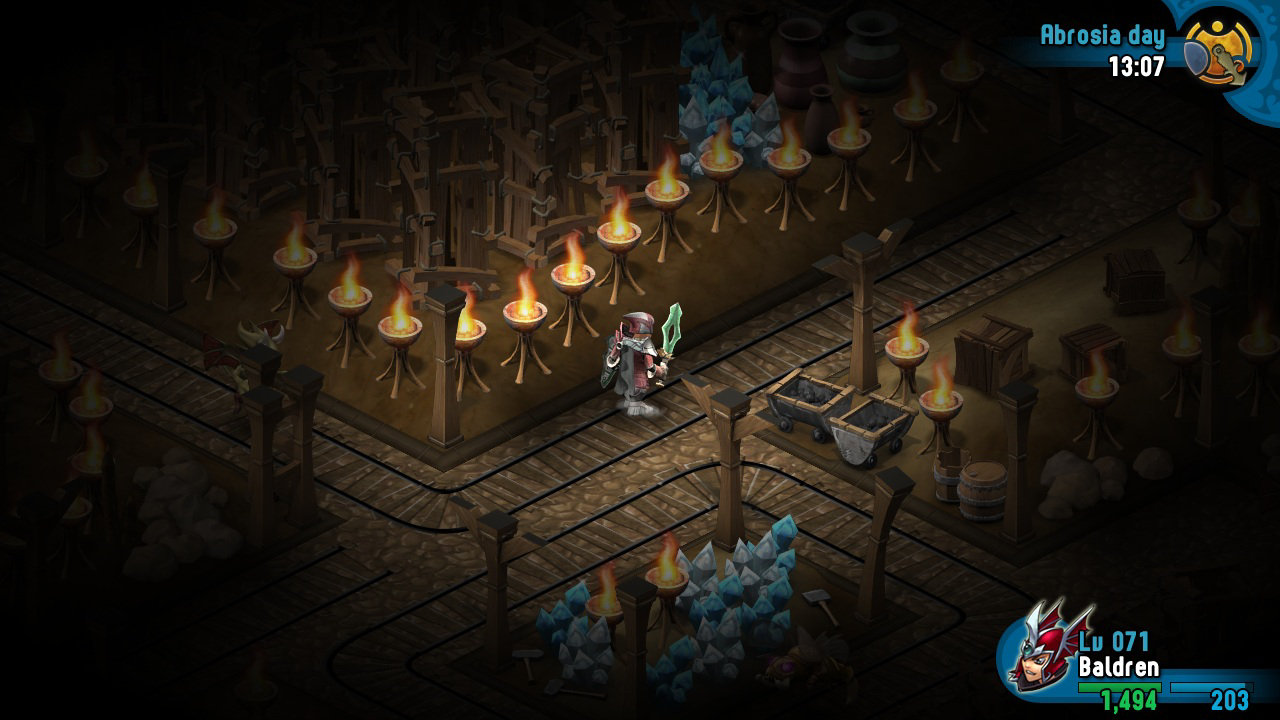 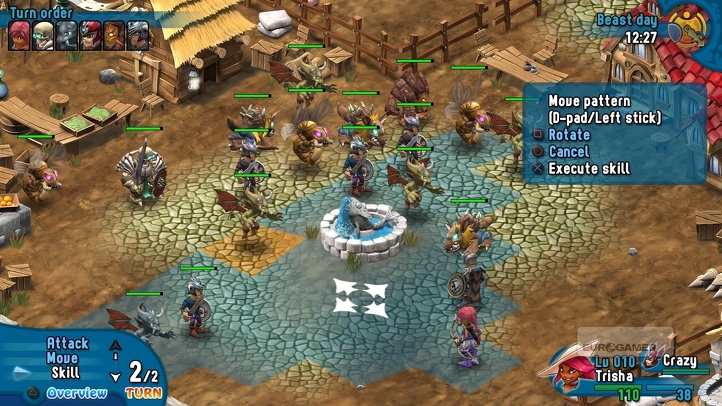 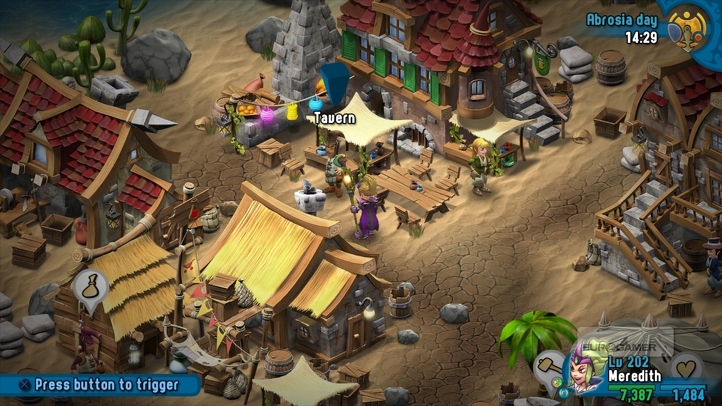 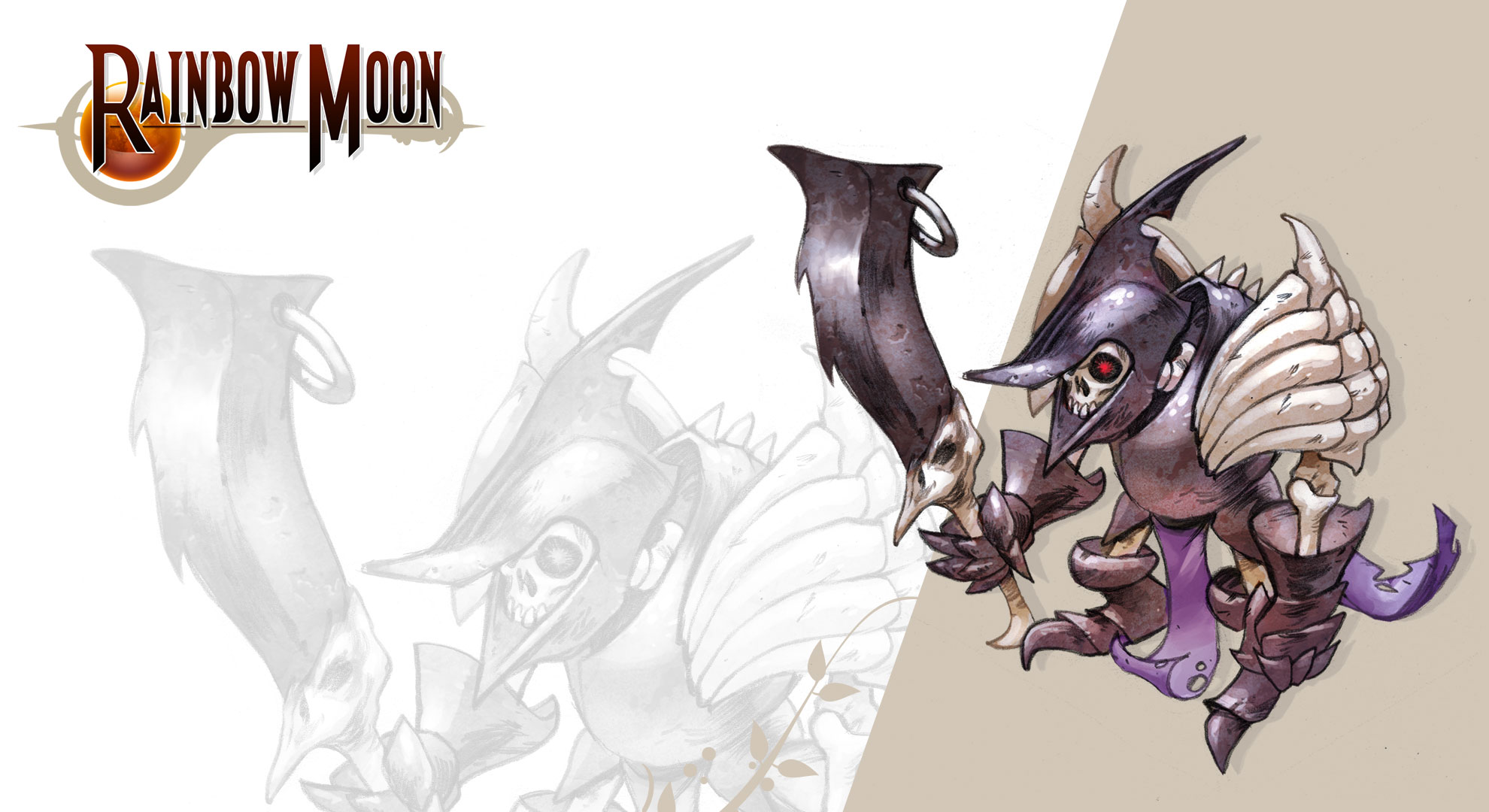 Battles in rainbow moon have me somewhat on the fence though. The grid based fields and turn based moves will be a thorn to any button mashing player out there, this is a system where you have to use the strategic side of your brain and really think before making a move. Movement around the field is very limited in the beginning, but will grow as you progress further into the game. You can also take advantage of drops from enemies, which will take up a square on the field, making it impassable and giving you advantages if left there.

The camera is also on a fixed isometric angle during battle mode, which frustrated me to no end in terms of movement. Though it does give you markers displaying what to press for each direction, I often wondered why it even needed to be there in the first place, as one simple miss click sees you loosing that part of your turn, with no way to back track. Also if you are cornered on the bottom edges of some fields, your character will be obscured by walls and you have absolutely no way of seeing what to press for which direction. As you can probably tell, that happened to me a lot.

But Rainbow moon isn’t all that bad, while the art style and animation is a little lack-lustre, the soundtrack has some true gems hidden in it. For a game with hours and hours of playable content, having a good soundtrack to accompany it without annoying the player is a big task, but it’s been done pretty perfectly in this game.

Overall, I did enjoy this game, despite my negative outlook on it. Rainbow moon is made for the RPG lover who enjoys dwindling away hours grinding for levels, and I hold this game in high mind. There are not many old school styled RPGs coming to the table these days, and Rainbow moon has done the genre some justice in that respect. This game will be perfect for the battle hardened RPG veterans out there, and while it may not look like much on the surface, looks can be deceiving.