I didn’t know anything at all about République before I agreed to review it. Someone just said the word “stealth” and my hand automatically jumped into the air, volunteering me for an experience I wasn’t really ready for. This lead me to have zero expectations, something that I think really lets a game prove itself on its own merits and not feel the pressure to live up to hype.

In République, you play as… Well, you don’t really know. At all. The game starts off with you receiving a video call from a girl named Hope, begging for help, saying that is in in danger of becoming ‘erased’. And although I didn’t know exactly what that meant, I knew it probably wasn’t something pleasant.

You don’t know where she is  and no one tells you. But the world does. There are so many clues scattered around the environment that you will eventually put all the pieces together to discover that Hope isn’t living in some sort of futuristic paradise – in case her crying and begging for help wasn’t a big enough indication. Personally, I find it very disturbing when people start yelling about the dangers of information, and that having books found in your possession could lead to nasty consequences. This game had me freaked out right from the start and pretty determined to save Hope from this hellish place. 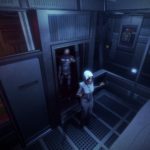 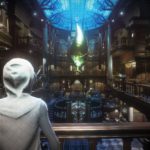 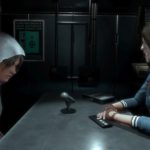 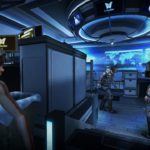 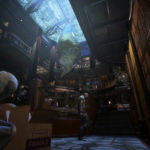 Which is a good thing because République doesn’t hand over all the answers. You need to search for them, through newspaper clippings, and voice mails and stuff stuck to walls. You will need to backtrack quite a bit if you are anything like me and just want to know everything that is going on in the world. But I’ll tear myself away from babbling on about the story because, 1: I could talk about it all day, and 2: I don’t want to let slip spoilers.

Mechanically, this is a pretty simple stealth game; you hijack surveillance devices scattered around the place in order to get Hope out of the prison safely. You need to scout ahead, remember guard patrol patterns, and find the safest path guide Hope along. All the while getting more disturbed with the world she is living in.

“This game had me freaked out right from the start and pretty determined to save Hope from this hellish place.”

The mechanics themselves aren’t too complicated, but getting caught gets harder and harder to avoid. Hope isn’t really well equipped to deal with guards either; she can use pepper spray, tasers, sleeping landmines, but nothing fatal and nothing will 100% guarantee her safe escape.

But getting caught isn’t the be all and end all that the game originally implies. All these threats of being ‘erased’ slowly become jokes as you just keep getting put into a jail cell (read save point) every time a guard catches you. You get told time and time again of the deadly consequences of the crimes that Hope has apparently committed, yet they are treating her like a five year old – “You’re going to stay in your room and think about what you’ve done!”. And then you promptly break out and continue on your way.

As a fan of stealth and heavy narrative, I really enjoyed République. I loved exploring the world and working out how to get Hope from point to point. I love how I wasn’t outright told about the world, instead I was left alone to figure it out for myself and stealth is just my type of play style. I wouldn’t say its a must have title, but it is a game that does stealth right.

Video and tabletop game lover. Canonically bi. Has way too many hobbies for her own good.