At its best, Star Fox Zero is a fast paced and fun space shooter, flying through obstacles and causing explosions in a frantic dash to the finish. It’s exhilarating and memorable. At its worst, Star Fox Zero is a jumbled mess of a control system that tries its best to incorporate an underused piece of tech with very frustrating results. It feels like we’ve been waiting a long time for this game, which makes the mixed and often mundane result a serious disappointment rather than a triumphant return to a much-loved Nintendo franchise.

Let’s start with those controls. I would have liked to be a fly on the wall in the meeting rooms when this control scheme was first approved, and then meet the guy who approved that approval, because whoever thought this was a good idea in the first place needs to seriously question their decision-making skills. On the TV screen is a point of view behind your ship, while the gamepad shows the view from your cockpit. This is fine in theory, except you don’t really have a choice to just use one perspective – you need to use both.

See, the aiming reticule on the TV screen is intentionally inaccurate, forcing you to look at the gamepad to get precise aim on what you’re shooting. But then if you’re just looking at the gamepad, you’re lacking the spatial awareness required to fly around and get your bearings, forcing you to look at the TV. This creates a constant awkward nodding back and forth between the two that is still confusing to me even after I’ve finished the game. I could never quite find my rhythm, which meant the replaying of levels multiple times and certain boss battles that caused me to seriously consider tossing my gamepad out the window.

“…the controls are slightly more tolerable in co-op mode”

Not all of the ideas are terrible; as I said earlier, there are moments where Star Fox Zero works well to create a sense of urgency and drama, blowing up giant enemy spaceships and escaping in the nick of time or narrowly avoiding a swift death by darting and weaving through oncoming debris. Certain missions are basically on rails, which means you don’t have to fight with the silly control scheme as much, and I found these to be quite enjoyable and colourful experiences. 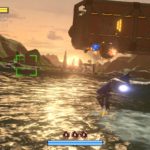 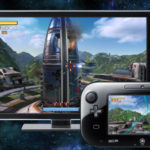 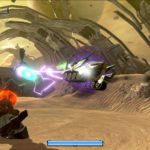 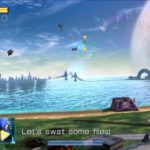 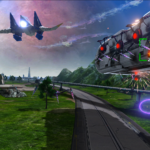 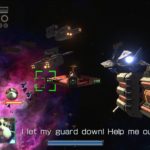 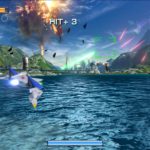 The other vehicles you’ll sporadically use throughout the campaign include the chicken-like Walker that brings your combat to ground when required and the new Gyrowing, a slow-hovering ship that is involved in some specific stealthy hacking missions where you have to lower a small robot into a passageway while avoiding lasers. It’s about as fun as it sounds and feels off-pace with the rest of the game. The other vehicle that comes up is the Landmaster tank, which is probably the most fun of the three and slightly easier to navigate, complete with the ability to turn into a jet for a bit more speed.

The adventure itself is quite simple, but is engaging enough I suppose. It will only take you a few hours to complete the story, so going back to try and get higher scores should be a motivator, and the controls are slightly more tolerable in co-op mode because it’s much easier to look at one screen instead of two – shocking, I know. I think the most frustrating thing is that if they’d just left the controls alone and made them simple like on Star Fox 64, we’d have a decent (albeit much easier) game on our hands that would inspire people to go back for second and third helpings. At least the game looks visually appealing for the most part.

Wii U
Shoot 'em up

Star Fox Zero attempts to make the most of the Wii U gamepad, which is commendable in the sense that many other Wii U games don’t even bother trying. Unfortunately it doesn’t pay off. If you do take the time to learn the controls, there is a decent game here that is fun and reminiscent of the Nintendo 64 version of the game that it’s referencing, but that’s a big if. Gameplay mechanics should only be modified heavily if it’s going to enhance the experience and improve upon it; while that’s what I was hoping for, instead it’s a bit of a hot mess of jumbled ideas and questionable execution that is too complicated for its own good.