Go fast! Even faster! No wait, not that fast. This should be the tagline of Trackmania Turbo. This game is not just a racing game… OK, well it is, but ooooh boy! It is fun! I’m not even a fan of racing games, but this arcade throwback style of fast racing just got my nostalgia juices flowing once more!

TrackMania Turbo has so much content, in the standard solo campaign; there are a whopping 200 maps! Divided equally into 4 environments, these being: Canyon Grand Drift, desert styled maps where you can test out your drifting skills. Valley down and Dirty, for the rally lovers among us. Lagoon rollercoaster, where you can soak up the sun and get massive air/whiplash in the process. and International Stadium, a city full of crazy loop-d-loops and big air and tight corners.

Most of these maps can be finished in about 30-40 seconds, allowing you to move through them quickly… unless you make one wrong turn and ruin you perfect run…. but it’s OK! they have a neat little respawn button for that, smack that little beauty and you’ll be back at the start of the race ready to go again…. A rage quitters dream.

New to this iteration of Trackmania is the super fun but also, very unique Double Driver mode, where you have two players controlling the one car, so if you want to do a sharp left, you both have to do a sharp left, if you want to brake, you both have to brake…. this makes for a lot of screaming at your friends, but so much fun.  the whole campaign can be completed in this crazy mode! It’s a welcome change to a stale racing genre.

Now for those who have played Trackmania in the past, you will know that a massive part of the series is the track builder. Allowing you to build the craziest tracks you can think of… so many jumps, so many loops, so much turbo! Trackmania Turbo doesn’t fail to deliver on this, doing what they do best and letting their fans build the tracks they really want to play. It’s simple and easy to build the tracks of your dreams. So much content! 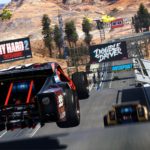 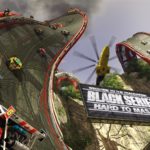 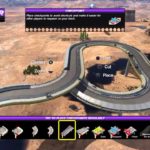 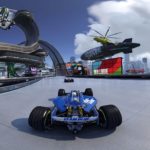 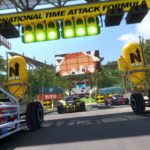 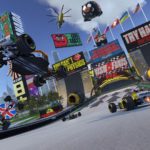 The part of the game that i really got stuck into the most was the open online modes. Pick a room, then the game loads a user made track for you, and you’re off with about 99 other players, the start of every race is quite hilarious, watching 100 little ghost players fly around the corner and crash into the first obstacle that none of us were expecting. I spent hours in this game mode, it’s just a lot more fun than the rest of the game, its faster, its wackier, there are more big jumps more loops, more wall drives, more everything!

So as you can guess, the only way i could fault this game is by the developer content, their maps are a little too…. racey? Standard?  but i think that’s on purpose, they knew that us, the fans of Trackmania were going to be the real MVP’s and create the craziest fastest, biggest, scariest, loopiest, maps out.

“…to activate super hard mode, hold the controller upside down…”

My favourite part of game was when I noticed a “Pro Tip” on the loading screen which stated “to activate super hard mode, hold the controller upside down” which I then did, and it was really hard, but super entertaining causing me to have the goofiest smile as I tried to play this DIY hard mode.

Everything in Trackmania Turbo works. Its’ is fun, its fast, its frantic, it really nice to look at it has some crazy ideas breathing fresh life into an otherwise tired genre, and there is the possibility of always being new content… A super exciting fast paced over the top game.