Nights of Azure was my first foray back into the creations of Gust since the Atelier Iris series, of which number 3 was a particular favorite. The game is set on Ruswal, a mysterious floating island in the North Sea.  The inhabitants of Ruswal have been tormented by blue blooded demons since the defeat of the Ruler of the Night, whose blood transformed all it touched and cursed the land to be without true night. No one goes out for fear of the terrors that lurk outside, of which few possess the strength to overcome.

One who does possess such strength is Arnice, the main protagonist of the story and an agent of the Curia, the organisation responsible for the elimination of demons throughout the world. Arnice is a half demon Holy night tasked with investigating and purging Ruswal of its demonic influences. To her surprise, the contact she is supposed to meet turns out to be a childhood friend, Lilysse, and thus the game begins.

Nights of Azure throws you into battle within minutes of the opening scene finishing, but fear not, everything is explained in detail as you go (so you’ll only learn the hard way if you skip the on screen prompts). You battle as Arnice and up to four Servans, creatures with a wide array of skills and attributes that she summons to aid her. Arnice’s primary attack style is very hack and slash orientated, which I expected of the game, but things get very interesting as you progress through the story and level up. As this occurs, she gains access to different weapons manifested through her demonic blood, as well as four ultimate forms (which I also expected from the game). 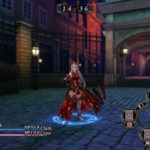 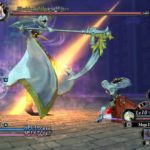 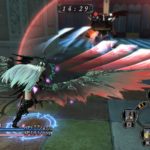 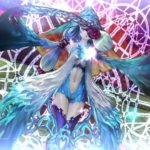 The Servan system was of particular interest to me, as I am used to micro managing a “pet” in my MMO gaming life. Compared to what I am used to though, the system in Nights of Azure was much more in depth as you are able to customise the servans’ equipment and skills as they level up themselves through battle. The servans are the gateway to Arnice’s ultimate forms and have attributes that determine which form will be used. I had a lot of fun experimenting with various party formations to access the different forms and overcome various boss strengths and weaknesses. You are able to use up to four parties or Decks of servans at any one time, and can switch between decks as you see fit. Be forewarned though, if you switch decks, any previously summoned creatures leave the field and you aren’t compensated for the SP points you used to summon them.

One slight frustration arose when I would use the Servan skills and they’d be nowhere near the enemy I had targeted. You could get around this somewhat with a couple of the commands you can issue to the servans, but it still felt a bit clunky and unrefined to me as I was playing. You would sometimes have to continuously issue commands while dodging and fighting, which I would deem reasonable in moderation, but not to this level. Another drawback was that to strengthen the servans you had to use the demon blood you collect as you battle, which is the sole currency used to level up Arnice. You do come across equipment that increases the amount of blood spilled in battle (which you command your servans to consume to collect it) but the grind does get a little tedious.

“… to strengthen the servans you had to use the demon blood you collect as you battle, which is the sole currency used to level up Arnice.”

Coming back to the storyline, and of particular relevance to the checkpoint audience, Nights of Azure centres around the love between Arnice and Lilysse as they navigate different paths to save the world. I was really happy to see a lesbian relationship featured so prominently in a game as it added an extra level of relatability that, up until recently, has been severely lacking in the games I play. You are presented with choices along the way that will either strengthen or break that relationship so choose well.

Overall, I did enjoy the game, but there is still a lot to do to satisfy the completionist in me. The game is quite text heavy and you will find yourself talking to the same people over and over a lot, but the graphics and music are pretty good, with some really beautiful piano pieces in it. It may not be the most original storyline, but Nights of Azure is definitely worth a play through for anyone looking to satisfy their RPG cravings and not have to commit hundreds of hours to complete it.