With Overwatch, Blizzard Entertainment adds yet another addictive classic to its collection. Even in the over-saturated genre of online multiplayer shooters, Overwatch emerges clearly at the top of pile. The beauty of this game is in its simplicity: it’s what allows for the game to be fun, competitive, and accessible all at the same time. As long as Blizzard continues to drive newness into this game while maintaining that simplicity, it’s not hard to imagine that this game will be highly played and greatly enjoyed for years to come.

Overwatch is a 6v6 team-based shooter. Each map has a different set of objectives that you have to complete. These range from simple assault and defence missions, to escort missions where you have to deliver a payload to a specified location, and control point missions, where both teams fight for ownership of the centre of the map. Each of the maps are set in iconic locations around the world with a futuristic twist. Players can take to the battlefield with one of 21 heroes, each with their own strengths and weaknesses. Most heroes have two abilities, a primary and secondary weapon and an ultimate ability that can really turn the tide of battle. This consistent approach to the way each hero is set up is one of the reasons this game is so easy to pick up and play.

It doesn’t really get any more complex than that, but for the four different game modes you can try out. Practice mode allows you to test out each of the heroes and maps without the distraction of other players. There is a Human vs. AI Mode, which pits you and other players against a team of computer-controlled heroes, which is an excellent learning environment for beginners. There is also a “Weekly Brawl” mode, terminology that will be familiar to Hearthstone players, which adds a different set of crazy rules each week to the standard gameplay.

Most people will just jump into the Quick Play mode once they’ve had enough practice. In Quick Play, the team, the map and the side are all chosen for you: all you have to think about is picking a hero and then getting straight into the action. I think this is a large part of why this game is so addictive: it’s so quick and easy to get started, so it’s great if you just want to jump on for half an hour and get your fix. At the same time, there is a lot of inbuilt variety in this game due to the different maps and heroes, that hours will pass before you know it.

“…there is a lot of inbuilt variety in this game… hours will pass before you know it.”

Precise and enjoyable gameplay is what is going to sell this game, but there are so many other little features that provide the polish that makes Overwatch top-tier. The ability to enter the fray as a pre-made group is something that I had taken for granted until otherwise respectable multiplayer shooters, such as Dirty Bomb, removed that functionality. Thankfully, playing with friends is made nice and easy in Overwatch: all you need is their Battle.net ID and away you go. Similarly, in-game tutorials and tips are something that these games tend to do consistently poorly for reasons I simply can’t understand. Overwatch on the other hand has a nice simple tutorial, and tips that are relevant to the hero you are playing, or the situation you find yourself in. For example, if you’ve had a hole put through your head by Widowmaker for the third time, the game will gently remind you to make your approach through areas with more cover, or to move erratically when this isn’t an option. 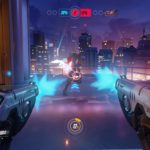 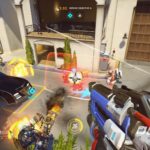 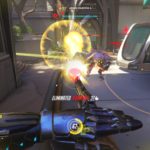 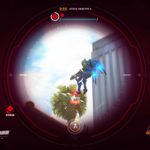 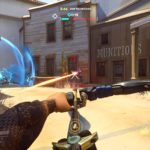 It’s this commitment to making the game simple in the first instance, while educating players on ways they can improve, that sets Overwatch apart from similar games. New players can actually pick this up and play without feeling disheartened in the first five minutes. Of course there will be those frustrating moments where you feel like you’re getting picked on by experienced players. Unfortunately that’s the reality of the genre, but this game at least attempts to foster a culture of learning and improvement, which is far better than most. Pressure on newer players is also likely to be alleviated through the release of Competitive mode, currently penciled in for June.

One sign of a great game is when you’re so focused on playing that you don’t notice the quality of the production. Music, sound and voice acting are completed to a very high quality in Overwatch, and work together to set mood, enhance gameplay and bring the heroes’ personalities to life. It’s not easy to pull together such a large and diverse list of heroes and make them each visually unique, but Blizzard has achieved that. The use of real-world locations to stage the combat adds a really cool dimension to the gameplay, and the attention to detail used on each map is astonishing. Graphics are very sharp and delightfully vibrant, and they’ve made a good effort to reduce on-screen noise by using a very simple heads-up display. Additionally, if you’re one of those people that like to collect everything, rest assured that there is an expansive looting and shop system currently allowing players to purchase up to 54 combinations of skins, poses, voices and sprays for each hero with either in game or real money.

If there was one real criticism of Overwatch, it would have to be that Blizzard hasn’t invested very strongly in narrative during gameplay. You’re told to take an objective and then deliver the payload to the finish: you aren’t told why it matters. This means that the goal is simply to win, but winning doesn’t seem to serve a broader aim. Perhaps hearing the same story for the 20th time you’ve played a particular map would get old for players, but it feels like they could have added a skipping function rather than omitting a narrative altogether. If you’re someone who likes a good storyline, one saving grace is the collection of  cinematics Blizzard has created especially for Overwatch. They add a bit of feeling to a game that does fall a little flat in that department: hopefully an area Blizzard will strive to add to in future.

The only way I can see this game faltering is if it doesn’t get the regular injections of newness that games such as these require, in terms of heroes, maps and game modes. But Blizzard has such a strong reputation for adding new content across its various franchises, that I can hardly see that as a likely outcome. If you like multiplayer shooters, or are curious to try one, do yourself a favour and pick up a copy of Overwatch. As Tracer would say: “…the world could always use more heroes.”