Kirby needs no introduction. While not quite the iconic status of the Mario Bros. this amorphous, happy go lucky character is a fan favourite; featured widely across the Nintendo franchise. His M.O. is simple: in the name of protecting his home, Kirby sets out to cut a path through the 2D levels, inhaling enemies to gain their power (it’s the warrior’s way, you know) or spitting blocks and stars at those who stand in his way. And in Planet Robobot, the second 3DS title for Kirby and a direct sequel to Kirby Triple Deluxe, he comes with attachments.

Unlike some previous Kirby titles, you won’t be learning a new control system or corralling him with your stylus. This is classic platformer-puzzle action. When a large evil corporation sends its robot enhanced minions to capture Planet Pop Star, home to the Kingdom of Dream Land and our plucky protagonist, it doesn’t take long for Kirby to seize the opportunity to steal a robot suit and take the fight to them.

Kirby, like many of us on a night out, has a choice: wear the fabulous outfit and forgo eating for the near future, or let his blob self be free and inhale anything in sight. It’s not a cheat day if you set your own rules after all, something Kirby has always done. Instead of inhaling, while in the suit Kirby can scan his enemies, copying their abilities in 1 of 13 modes, on top of the 27 copy abilities in his standard form, some of which only available through amiibo interaction. 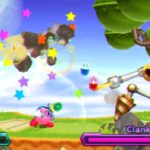 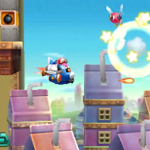 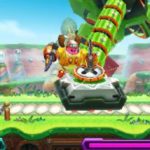 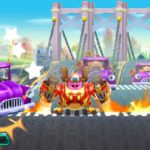 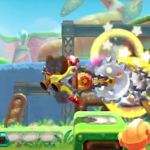 While you will find a number obstacles and puzzles along the way, completing levels is generally a straight run, and rather than overly challenging. This is a fun pick up and play game, designed to let you play around with the different copy abilities and searching out hidden doorways. Occasionally you’ll need to actually pay attention to puzzle hints or replay in order to receive code cubes, hidden blocks that must be collected each level to unlock the final boss of each map, however it took me most of the game to realize this was the challenge, as anyone familiar with platform puzzle games will have little trouble collecting up the majority of these cubes on their first play through.

The storyline mode isn’t a particularly long one. 6 areas, each with a map of 6 stages can be completed in as little as 5 or 6 hours on a single run through. While this is extended by repeating levels to collect items missed before, as well as a replay mode featuring another favoured inhabitant of Planet Pop Star, this is probably not a title for those looking to maximize their game hours to price ratio. For Kirby fans however, it’s a new yet classic Kirby, and that should be all that is required to convince you.

The art style alone is worth the price of admission. Filled with whimsical locations and nods to classic Dream Land features it’s perfectly understandable if you find yourself falling off the map or running into walls as you’re distracted by all that’s going on in the background of this 2.5D planet. Clever use of the fore and back grounds adds some depth and complexity to levels compared to Kirby’s original adventures, and shows that developers have comfortably settled into this blending of 2 and 3D structure.

While certainly not reinventing the wheel, Kirby: Planet Robobot is all that it claims to be. For those unfamiliar with the franchise, the gameplay may seem almost childish and out of step with modern platformers, but for those of us who have a connection to this 24 year long franchise, it’s proof that quality is not defined by complexity.