There was a real risk that I Am Setsuna would be crushed under the weight of expectation. As a spiritual successor to Chrono Trigger, with various nods to Final Fantasy and then finally published under the Square Enix label, Setsuna had a lot to live up to. Despite a few teething issues, Setsuna manages to bring together classic JRPG elements and twist them into something that feels unique, with heart befitting the small studio in which it was developed, Tokyo RPG Factory.

Before continuing to read, I encourage you to hit play on the soundtrack below.

The world is under attack from monsters. The only thing that can quell the ever-expanding onslaught is a human sacrifice made once a decade, which restores the world to a state of relative peace. The sacrifice this time around is Setsuna, the titular character, although surprisingly not the main protagonist. Those honours go to a masked mercenary named Endir (all characters’ names can be changed upon joining your party). You take control of Endir just as he finds out that his latest job is to murder Setsuna.

If this isn’t your first (JRPG) rodeo, this story won’t be unfamiliar to you (aside from the attempted murder of course). The sacrificial girl trope has been used heavily before in other Square Enix titles (Final Fantasy X anyone?) and amongst other franchises (Tales of Symphonia). I don’t know whether it was good game development or just that I’m a fan of this particular trope, but somehow it doesn’t feel tired in Setsuna, instead falling on the good side of the nostalgia tightrope.

One thing I do know is that this game is easy to like from the outset, with its absolutely classic art style immediately visible. Character personalities shine through their avatars, portraits, conversations and actions in the best possible way. The relentless screens of white snow that you will be faced with throughout maintain their beauty with amazing attention to detail, whether it be the softly drawn snowflakes or the gradual fading of your footfalls as you wind your way through a location.

Setsuna features a soundtrack which consists entirely of original piano pieces. I simply don’t remember the last time I have found a game soundtrack that has been so skillfully arranged. Although the two and a half hours of music playtime will mean some repetition, you won’t be disappointed at all by this, such is the quality. Special credit must be given to composer and pianist Tomoki Miyoshi, who has put together a soundtrack which is entirely worth the purchase price of the game on its own. 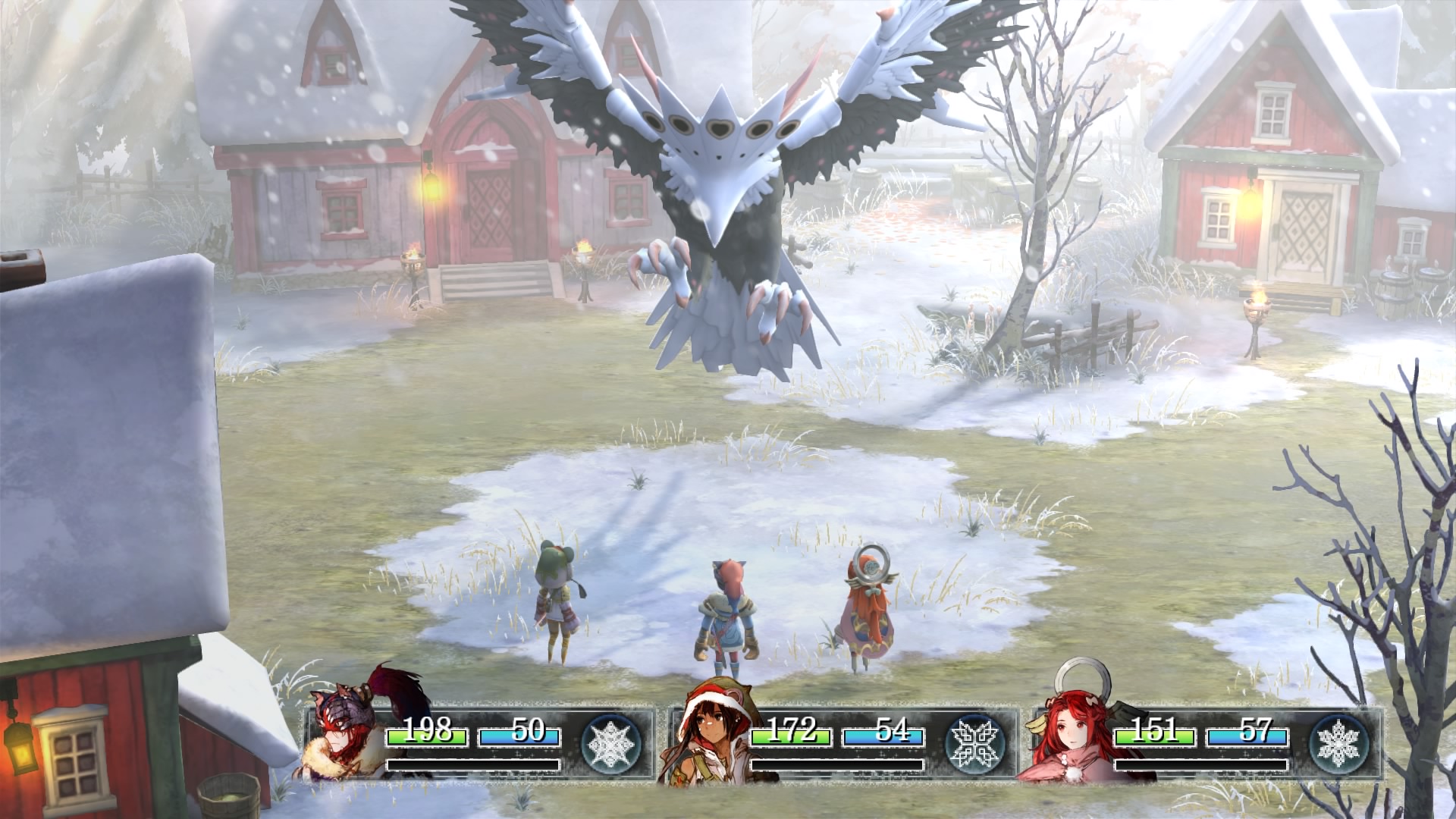 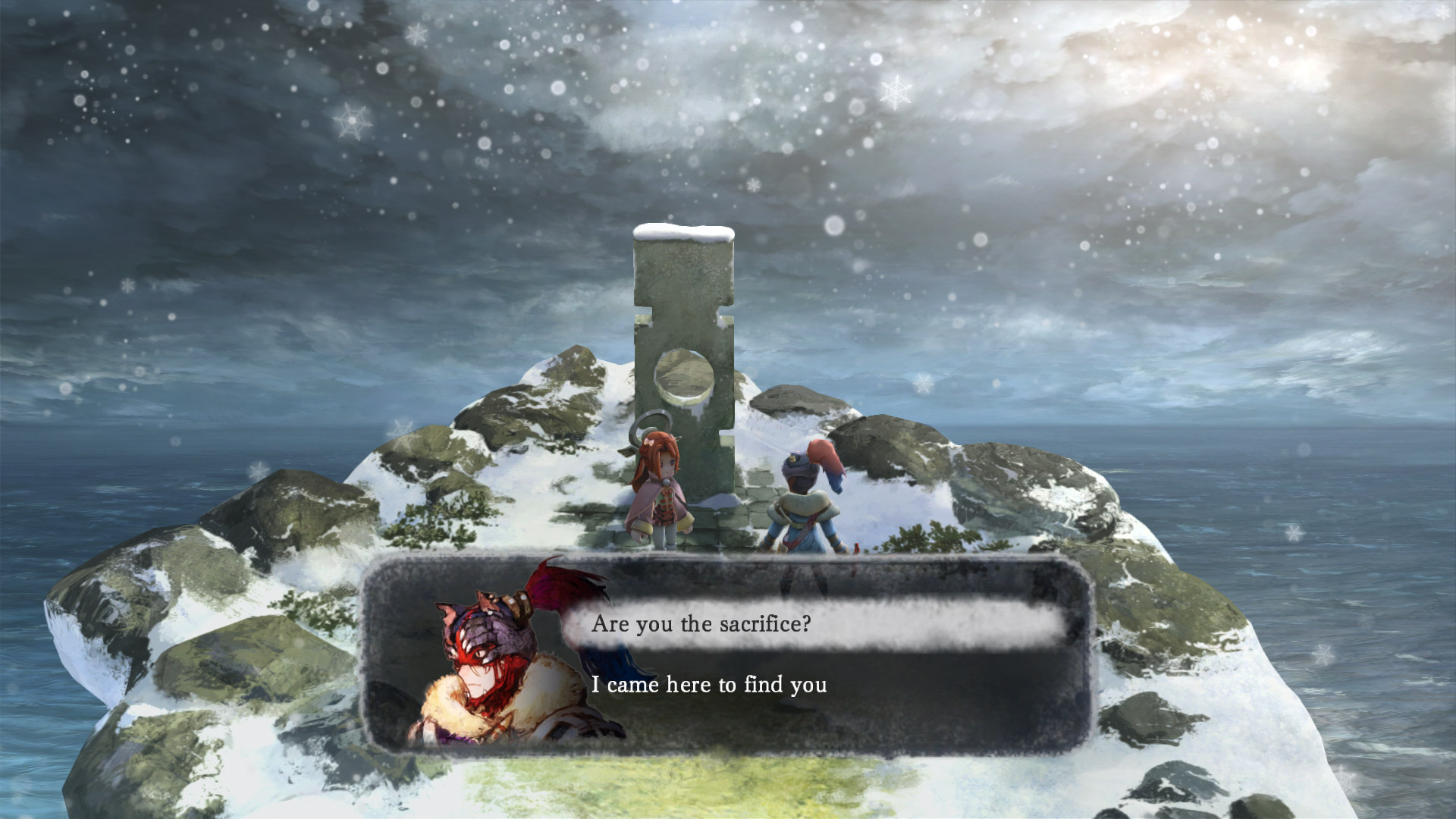 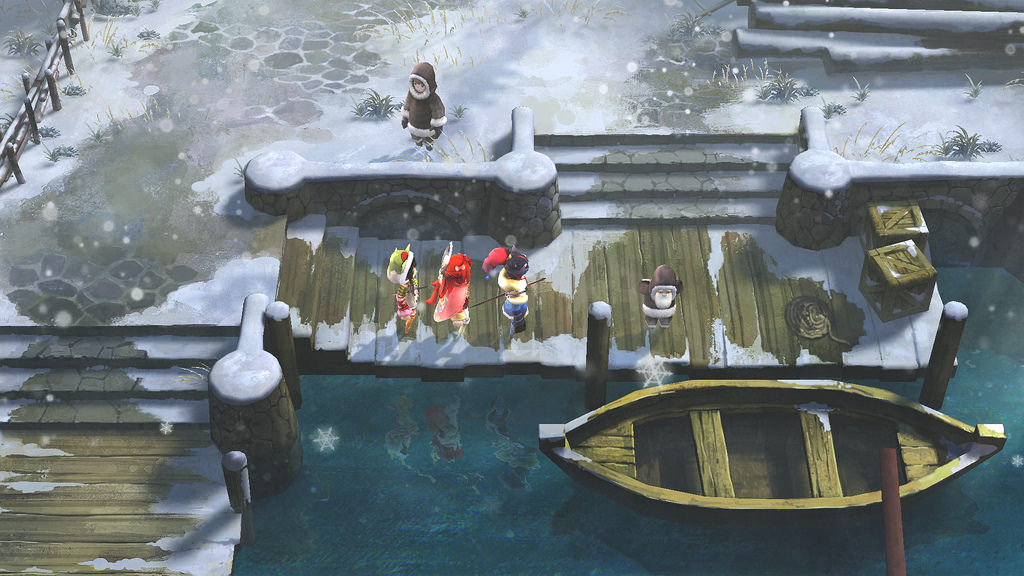 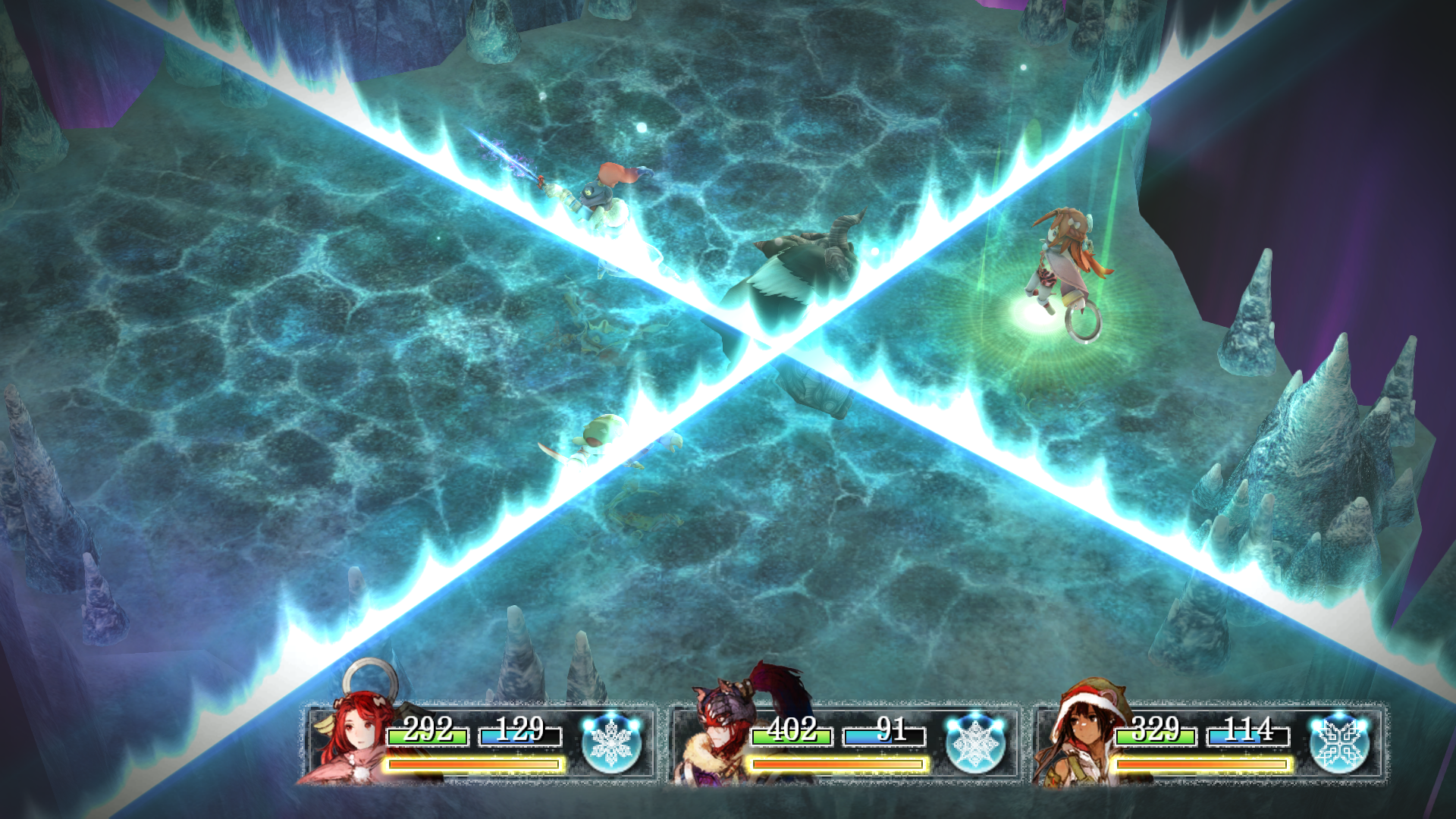 All of these pieces bring together the theme of a sorrowful, if not purposeful journey quite deftly. Even the name Setsuna in Japanese carries the dual meaning of “sadness” and “a moment in time”, which definitely encapsulates the spirit of the situation our heroes find themselves in. If I had one criticism of the narrative it would have to be that Setsuna herself, as well as her loyal guard, seem almost too ready to accept the cyclical nature of the sacrifice and it’s necessity. This is explored in depth in similar games, so I wonder whether there was a time constraint on this aspect of the story, as this is a comparatively brief JRPG of only 20 hours length.

On the gameplay side of the JRPG coin, things function broadly as you would expect. Setsuna uses an Active Time Battle system that will be very familiar to many by now, most especially previous Chrono Trigger players. It’s a perfectly good, if not groundbreaking combat option which strikes a balance between long strategy and quick thinking.

Layered on top of the standard ATB system is a variety of other mechanics for the player to manage. Abilities are managed through “Spritnite” which are created using materials dropped by defeated monsters. Each Spritnite allows your character to use a different Tech once equipped. Certain Techs combo with other Techs held by other party members, allowing for some fun all-in abilities.

Up until here the system is quite intuitive and prompts the player to be curious and experiment with all of the different Spritnites to see what works best. Then things get a little bit out of hand. Momentum is kind of like a 3rd resource which increases the power of Techs the longer you have been in battle. Flux bonuses have something to do with momentum, but involve pressing buttons at the right time in the midst of battle to get a benefit. Singularities are another mechanic which give you random bonuses at random times.

“Setsuna is a real success for the Tokyo RPG Factory”

I could go in depth and try to explain the pros and cons of all these mechanics, but the upshot is that there are simply too many levers to pull. If this were a longer game it might be worth investing time into understanding how they work, but by the time the game was over I only just felt I was gaining mastery of Spritnite combinations, let alone the rest.

Combat balance seemed to seesaw violently between either too easy or too hard, with some mobs clearable with a single technique (the only concern being MP usage overtime), while boss fights might take several tries and clean out your whole inventory. This is particularly true of the “shiny” mobs, which are not visually distinct from regular mobs (or at least, not enough) but are a million times more difficult to defeat. The most frustrating aspect is that you don’t really know when you’re going to face one until the “you’re going to die now” music starts playing and you start panicking about when you saved the game last.

I want to stress that these very minor criticisms really all roll into one over-arching feeling on the game, that I just wanted more. More time to flesh out the story. More time to master the combat mechanics. This game masterfully brings together unique and nostalgic elements into a really solid JRPG experience: it just doesn’t give itself enough time for that to play out to full potential. That said, Setsuna is a real success for the Tokyo RPG Factory, and is sure to delight any JRPG fan.